A heating designer is asked to create a three zone radiant floor heating system using a 5-ton (60,000 Btu/h) geothermal heat pump as the primary heat source, and a mod/con boiler as the auxiliary heat source. Because of the symmetry of the building, each zone will have a six circuit manifold station with nearly identical circuit lengths. All the floor heating circuits are underfloor tubing with aluminum plates stapled tightly to the underside of the sulfuring and well insulated.

The designer sets up a primary secondary system where each heat source connects to the primary loop using a pair of closely spaced tees, as shown in Figure 1. 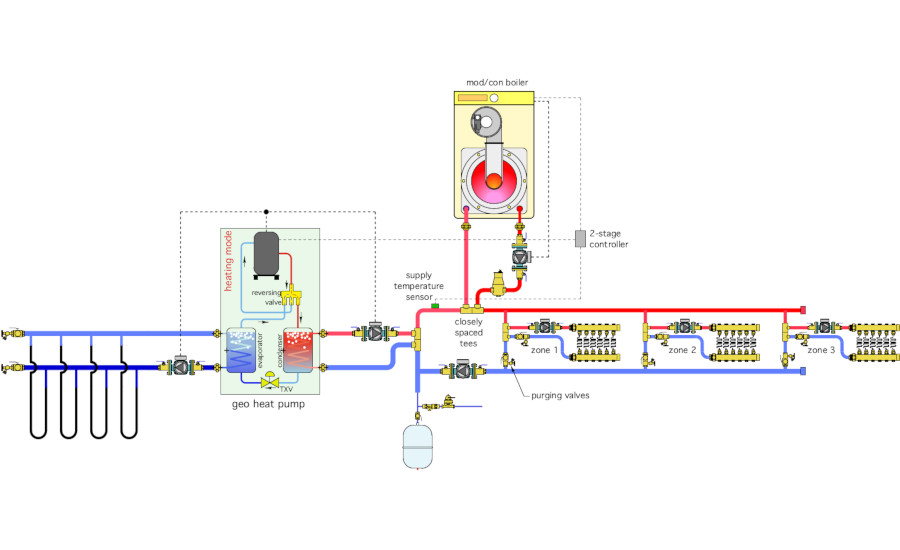 Each manifold station is also supplied from a pair of closely spaced tees installed in parallel “crossovers” of the primary loop. This keeps the supply water temperature to each manifold station approximately equal. The system has a seven identical 1/25 HP circulators.

The two heat sources are controlled by a 2-stage setpoint controller. When there’s a demand for heat from any of the zones that controller looks at the temperature at the supply sensor, and uses the following logic:

Look over the system closely. Can you spot several details that are either incorrect or missing?  Can you propose an alternative design that would accomplish the same goals using less hardware?

The system in Figure 1 is peppered with errors and omissions, including:

One way to eliminate these issues is shown in Figure 2. 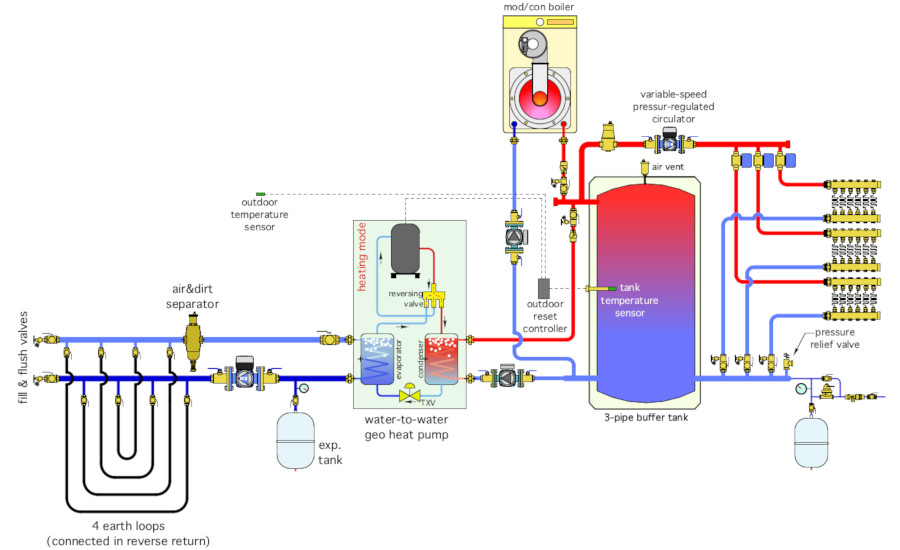 Both heat sources can operate individually or in parallel supplying heat to a buffer tank. The mass of the buffer tank stabilized the system against short cycling.

The distribution system is zoned with valves and supplied by a pressure-regulated variable speed circulator. This reduces circulator count and greatly reduces the electrical energy required to operate the system.

Each heat source can be isolated from the remainder of the system if necessary for service. Check valves are used to prevent flow reversal or heat migration through either heat source when it is off. A combination air/dirt separator and expansion tank have been added to the earth loop system.

Each earth loop can be isolated by ball valves, allow for faster filling and flushing. A pressure relief valve and properly configured make-up water assembly have been added to the system.

Download The Glitch and Fix: December 2020 in pdf form.