Given the current prices for fuel oil and propane, and current state and federal incentive programs, many homeowners are asking heating contractors to replace their aging boilers with a geothermal heat pump system. One installer, whose typical routine was to swap out an older boiler with a new boiler, with no consideration of the distribution system was asked to make the switch from an oil-fired boiler to a geothermal heat pump. The system he installed is shown in Figure 1. Use your knowledge of heat pump operating characteristics and basic hydronics to identify at least five design errors in this schematic. 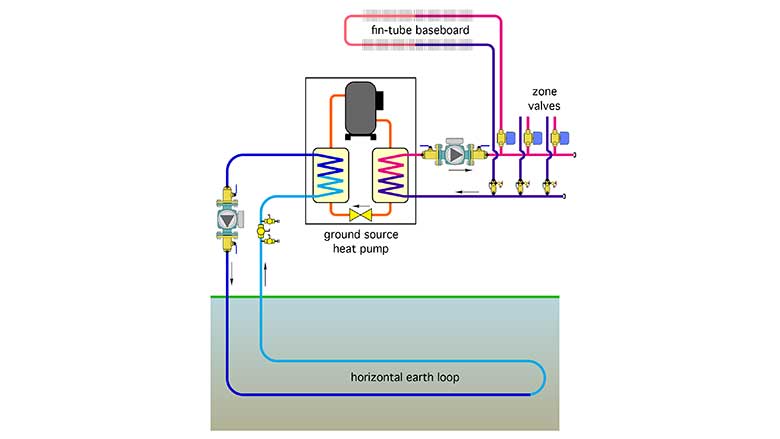 The majority of current-generation water-to-water heat pumps are single-speed “on/off” devices.  When on, they produce heat output at or near their rated output (depending on the exact entering temperatures and flow rates on both sides of the heat pump). There is very little thermal mass in a heat pump to store any heat that’s produced but not immediately sent to the load.

The distribution system shown in Figure 1 is zoned with valves, and thus, flow rates and rates of heat delivery can change drastically as the zones turn on and off. This will almost surely cause “out of range” operating conditions within the refrigeration circuit of the heat pump, leading to internal safety device trips (or worse).

To prevent such conditions, it’s imperative to include a well-insulated buffer tank between the heat pump and the zoned distribution system as shown in Figure 2. The heat pump cycles on and off based on the setpoint temperature of the buffer tank and the temperature differential across which the tank needs to operate. The load circuits can now operate completely independently of the on/off cycling of the heat pump.

Other errors in the original design include:

Details that correct these conditions are shown in the fix drawing. 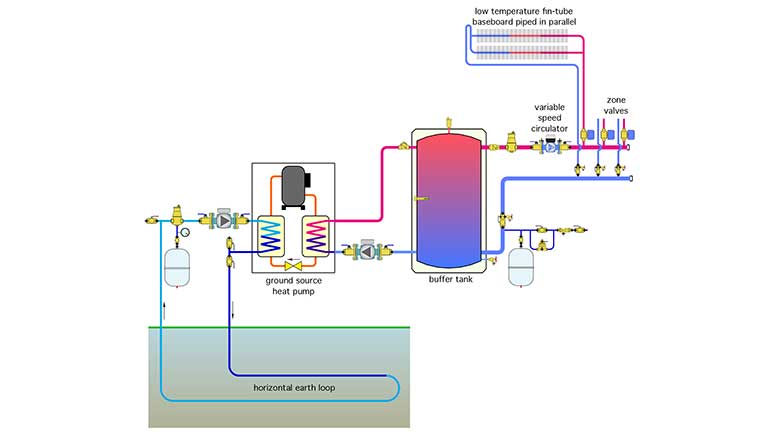