A homeowner hires a heating contractor to upgrade his propane-fired cast-iron boiler to a mod/con boiler. The cast-iron boiler is only 15 years old and in good shape. The homeowner asks if the contractor can reuse it to add heat to his 18,000-gallon in-ground swimming pool. The installer knows that this is possible using a heat exchanger. The installer also knows that the relatively cool pool water could cause sustained flue gas condensation in the boiler, and therefore decides to use a “bypass loop” with a separate circulator as shown in Figure 1. Because the repurposed boiler will be located in the pool house, the entire system up to and including the primary side of the heat exchanger is filled with 50% propylene glycol antifreeze. Can you spot several details that will lead to problems in this layout?

Although one might consider the brazed plate heat exchanger as having low thermal mass, it’s just interface for the thermal mass of 18,000 gallons of cold water in the pool.  It’s there because chlorinated pool water would otherwise quickly corrode the cast-iron boiler.

A “bypass circulator” will not protect the boiler from sustained flue gas condensation. It has no way of “understanding” when the rate of heat transfer at the heat exchanger is greater than the rate of heat production at the boiler. Whenever the heat exchanger is transferring heat faster than the boiler is producing it, the fluid temperature between the two decreases.  The larger the heat exchanger is, the more the fluid temperature will drop. It is very possible that the piping design shown in Figure 1 could keep the cast-iron boil in condensing mode whenever it operates, ultimately destroying the boiler and its venting system by corrosion.

The solution is a variable speed circulator operating in “setpoint” mode installed between the boiler loop and heat exchanger as shown in Figure 2. 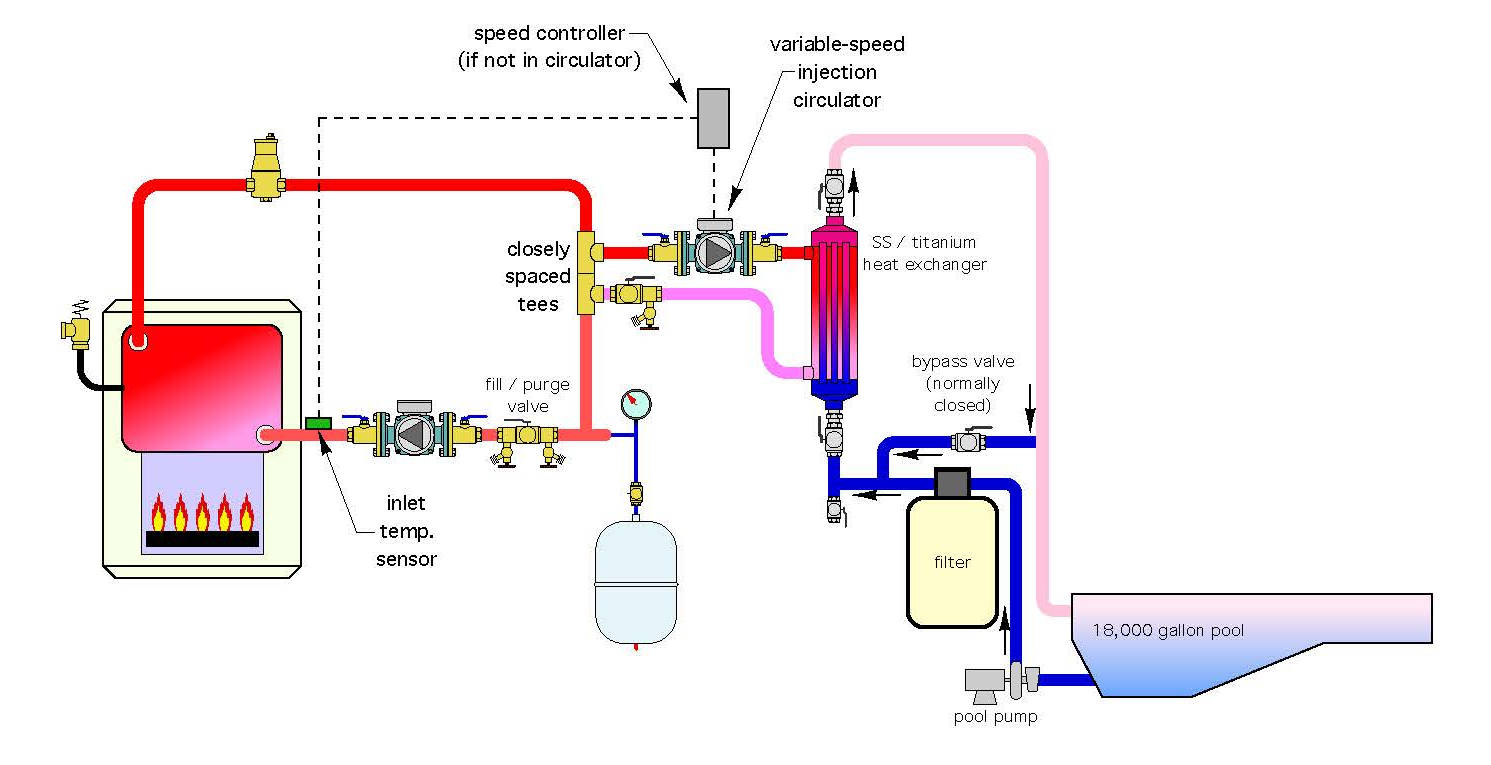 There are several circulators now available that have internal control logic for adjusting speed based on the temperature at an external sensor. It’s also possible to use an external temperature controller that can send a signal such as 2-10 VDC or 4-20 ma to a circulator with those control inputs.

There are several other details in Figure 1 that should be changed: