An installer is asked to add a monobloc-style air-to-water heat pump to an existing hydronic system that is supplied by a mod/con boiler. The system is located in a cold winter climate. The system has five zones controlled by zone valves. The system — as installed — is shown in Figure 1.

Can you spot several problems with this piping configuration and come up with an alternate layout? [click on image to enlarge] 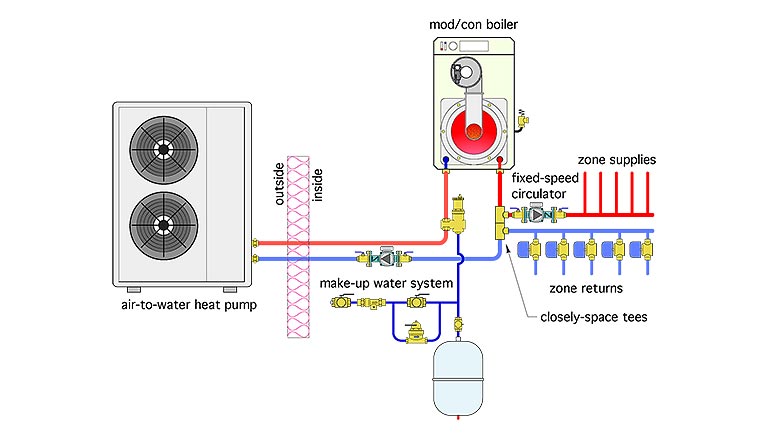 Let’s start out with the big blunder: The heat pump is outside in a cold winter climate and has water in it. If that doesn’t immediately make you nervous, it should. All that’s necessary to freeze up the heat pump is a few hours of sub-freezing outdoor conditions during which the heat pump is off. This off-time doesn't necessary have to be associated with a utility outage. It could be the result of a thermostat setback, or internal heat gains that keep the thermostats satisfied, and thus there is no need to run the heat pump. A hard freeze could burst the water-filled components in the heat pump. Think multi-thousand dollar repair cost…

An alternate piping configuration is shown in Figure 2.  [click on image to enlarge] 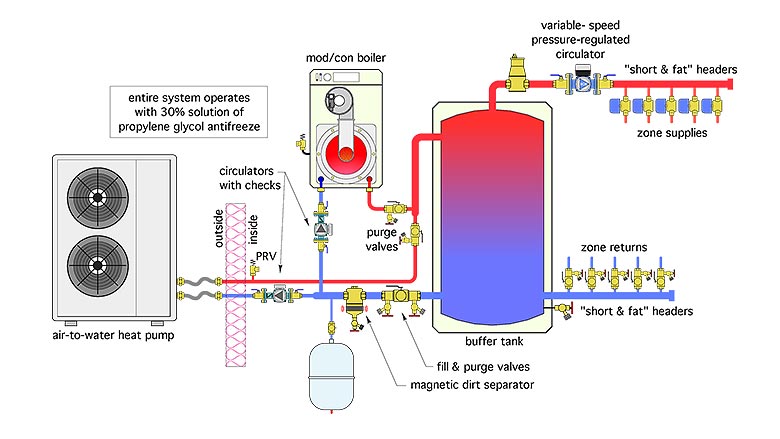 The configuration puts the heat pump in parallel (rather than series) with respect to the boiler.  Either heat source could operate independently when necessary. Either can be isolated for service without shutting down the balance of the system. Each heat source has its own circulator (matched to the flow and head requirements of its respective heat source). Both circulators have internal check valves to prevent reverse flow.  Each heat source branch has a purging valve.

The controls for this system would monitor the buffer tank temperature, either continuously during the heating season or when one or more of the zone thermostats calls for heat. A typical control sequence would have the heat pump serve as the “lead” heat source, with the boiler acting as the backup. However, other control modes are possible, such as operating only the boiler during times when expensive “on-peak” electrical rates apply, or operating only the heat pump during times when “off-peak” electrical rates are in effect.

The system includes a magnetic dirt separator installed upstream of both heat sources as their associated circulators. It’s there to minimize the chance of fouling the heat transfer surface in several thousand dollars-worth of high performance hardware — cheap insurance installed where it counts.

The system uses vibration dampening reinforced hoses to connect the heat pump to the rigid tubing used in the remainder of the system.

A variable-speed pressure-regulated circulator routes the hottest water from the top of the buffer tank to any zone calling for heat. Each zone circuit begins with a zone valve and ends with a purging valve.

The makeover uses a controller that measures supply water temperature as well as outdoor temperature and the temperature of water entering the boiler. This allows for either outdoor reset or setpoint control of the supply water temperature. It also allows the controller to prevent sustained flue gas condensation in the boiler by limiting the rate of heat injection as the slab is warming up. The original approach using “on/off” injection mixing cannot provide boiler protection because it has no way to accurately vary how much hot water is leaving the boiler loop and flowing into the lower temperature portion of the system.

The on/off zone valve in the original system is also likely to be cycled several thousand times each heating season. It’s just a matter of time until it fails. It could be replaced, but the same high cycling frequency awaits the replacement.

Another somewhat “crude” aspect of the original system is the pressure drop imposed by the reduced piping size between points A and B is somewhat arbitrary. A globe valve is a much more precise way to induce the pressure differential needed to push flow through the motorized valve as it opens.

Figure 2 also adds a purging valve in the lower temperature loop, and an air separator.

The Glitch + The Fix: One shot after another