Figure 1 shows the piping layout for an actual installation. It uses two boilers, fired in stages, to supply three areas of a building. One of those areas is sub-divided into three zones. The other two areas are handled by individual zone circulators.  The “primary circulator” operates whenever any load circuit is on. All circulators are fixed speed, and there is a partially closed ball valve at the end of the “primary loop.”

When any one of the three loads circuits is on, there is heat migration into the other two load circuits. The mechanical room where the boilers are located is also very warm, even when only one boiler is firing. Can you spot several errors in this piping layout and propose modifications that would correct them? 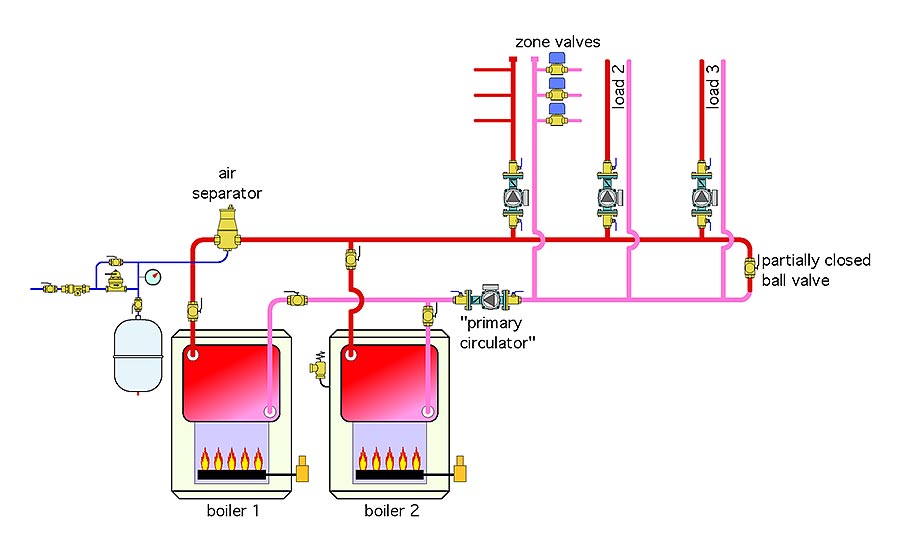 This system is neither a primary/secondary nor a 2-pipe configuration. It’s an undefined morphing of the two. Because the “primary circulator” operates whenever any of the loads are on, it creates a pressure drop across the partially closed ball valve. The piping upstream of this valve is at a higher pressure than the piping downstream of the valve. This “∆P” induces a slow, but persistent flow through inactive zones, even when the circulators in those zone are off.

The system is also piped to allow flow through both boilers whenever one or more loads are active. When one boiler is on and the other is off, the flow of heated water through the unfired boiler creates heat loss through the boiler jacket and unnecessarily heats the mechanical room. This heat loss also slightly reduces the supply water temperature to the load circuits. The fix is to pipe each boiler with its own circulator which only operates when that boiler is operating. Also be sure to include two check valves (either integral to each boiler circulator, or as separate components). These checks prevent reverse flow through an inactive boiler when the other boiler circulator is on.

Other missing or incorrect details include:

1. Placing the air separator when it only receives flow through Boiler 1;

2. Connecting the expansion tank close to the discharge side of the primary circulator (e.g., not pumping away);

3. Not having purging valves in each load circuit;

4. Lack of details to provide hydraulic separation of the circulators;

5. Having the inlet of the load circulators very close to the tees in the header (should always provide minimum of 12 pipe diameters of straight pipe upstream of circulator inlets);

6. No pressure relief valve on Boiler 1; and

7. No provision for draining either boiler if ever necessary.

Figure 2 shows one way to correct these issues. 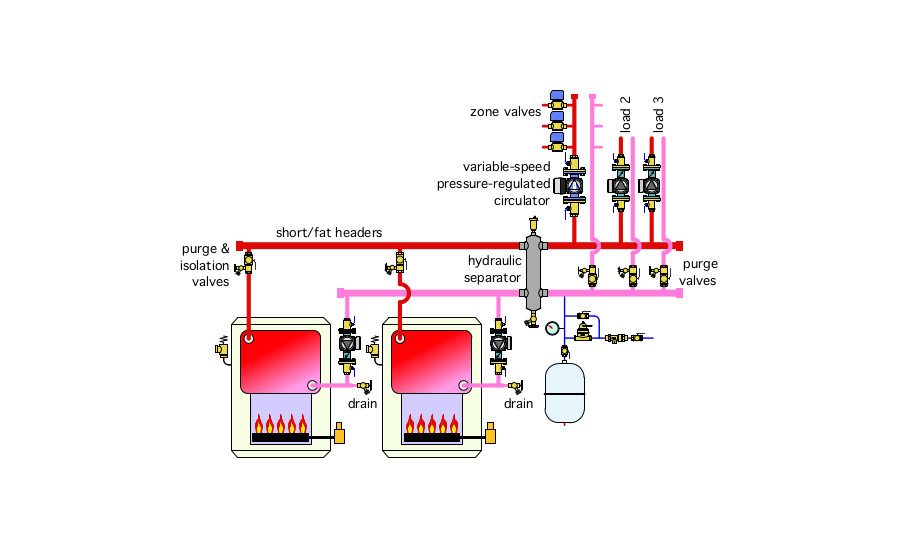 The use of “short and fat” headers also help ensure good hydraulic separation of all circulators. Flow to the loads supplied by the sub-circuits with zone valves is provided by a variable-speed pressure-regulated circulator. The zone valves have also be moved to the supply side of the sub circuits to help prevent thermal migration into circuit that are off. Purge valves have been added.

The expansion tank connects near the hydraulic separator, which keeps the pressure within the later very stable regardless of which circulators are operating. The circulators for Load 2 and Load 3 both have internal check valves to prevent forward heat migration and prevent reverse flow. Both boilers have pressure relieve valves and drain valves.

Download The Glitch and Fix: February 2021 in pdf form.