This website requires certain cookies to work and uses other cookies to help you have the best experience. By visiting this website, certain cookies have already been set, which you may delete and block. By closing this message or continuing to use our site, you agree to the use of cookies. Visit our updated privacy and cookie policy to learn more.
Home » The Glitch & The Fix: Combining geothermal heat pumps and radiant
Market SectorsRadiant & HydronicsPlumbing NewsRadiant/HydronicsThe Glitch & The Fix

As a fallback for being short on inventory, his supply house buddy tells him that there’s no need for an expansion tank in the earth loop because the HDPE piping has enough “give” to accommodate any expansion or contraction. He now envisions the HDPE expanding and contracting like a piece of unreinforced rubber tubing, and assumes that he can use this to his advantage on the load side of the heat pump. He pipes up the radiant floor manifold with leftover pieces of HDPE pipe as shown in Figure 1. He uses two fixed-speed circulators, one to supply each manifold station. Individual circuit zoning at each manifold station is done using manifold valve actuators, each wired to a thermostat.

Can you identify several problems with this approach and propose a better one? 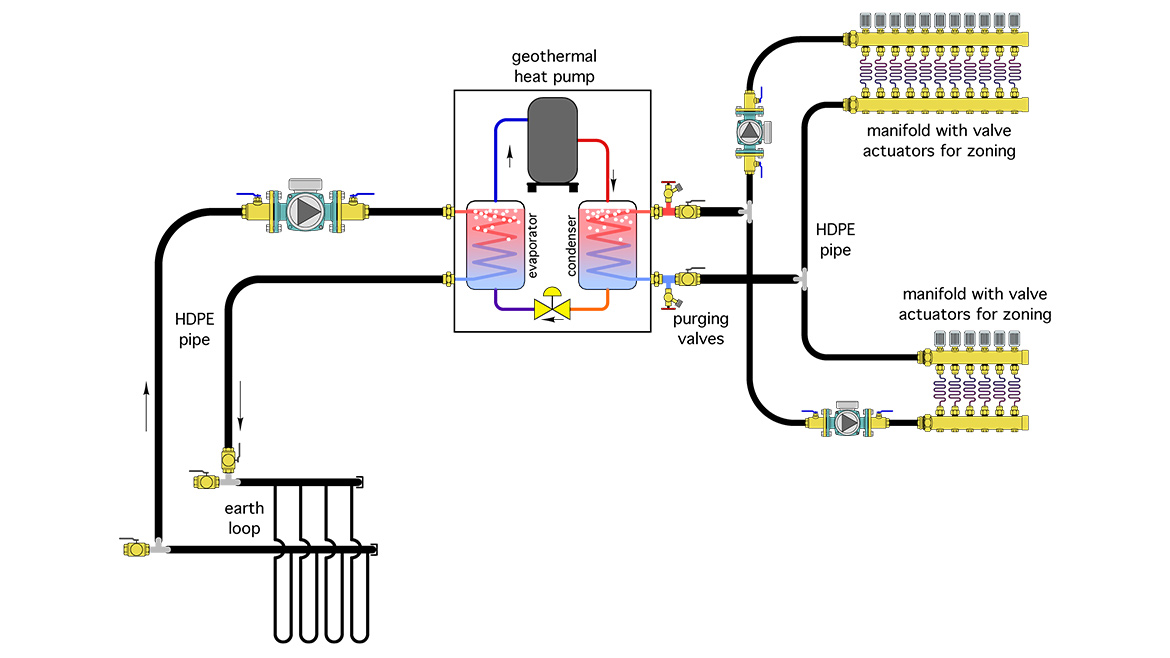 Although HDPE pipe does expand and contract as it changes temperature, it does so at a different rate compared to that of the glycol solution it contains. This difference in expansion rates can cause wide pressure fluctuations in earth loop.

Using an expansion tank in the earth loop portion of the system — as he originally planned — is a far better approach. It can greatly reduce the variations in earth loop pressure between summer and winter operating conditions. Since the earth loop is just another type of closed loop  assembly it should also be equipped with an air separator.

Take a close look at how the earth loop circuits are headed in Figure 1. They’re connected in a direct return configuration. This will cause unequal flow rates in the different parallel circuits. When the goal is to keep individual branch circuits that have about the same flow resistance, operating at about the same flow rate, those circuits should be in a reverse return configuration, as shown in Figure 2. 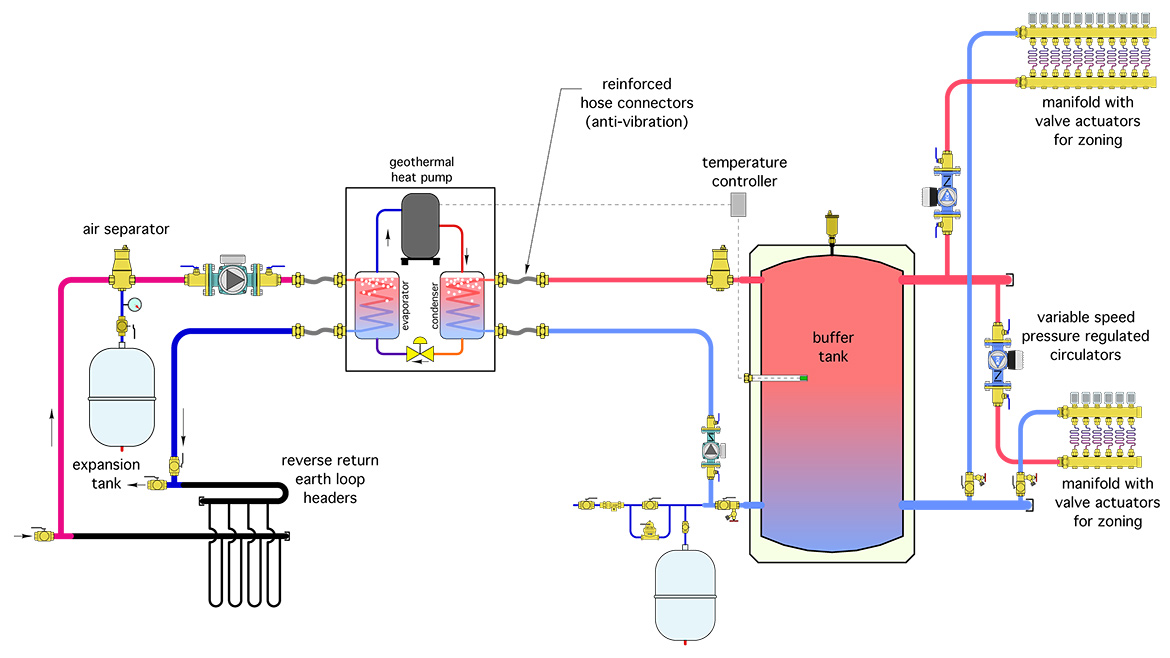 
The load side of the system shown in Figure 1 also has several shortcomings:

The makeover uses a controller that measures supply water temperature as well as outdoor temperature and the temperature of water entering the boiler. This allows for either outdoor reset or setpoint control of the supply water temperature. It also allows the controller to prevent sustained flue gas condensation in the boiler by limiting the rate of heat injection as the slab is warming up. The original approach using “on/off” injection mixing cannot provide boiler protection because it has no way to accurately vary how much hot water is leaving the boiler loop and flowing into the lower temperature portion of the system.

The on/off zone valve in the original system is also likely to be cycled several thousand times each heating season. It’s just a matter of time until it fails. It could be replaced, but the same high cycling frequency awaits the replacement.

Another somewhat “crude” aspect of the original system is the pressure drop imposed by the reduced piping size between points A and B is somewhat arbitrary. A globe valve is a much more precise way to induce the pressure differential needed to push flow through the motorized valve as it opens.

Figure 2 also adds a purging valve in the lower temperature loop, and an air separator.