An installer plans to use a single-speed monobloc air-to-water heat pump to supply several panel radiators. The radiators are equipped with thermostatic radiator valves to allow for room-by-room zoning. Because of this, the install sets up the radiators in parallel and as a secondary circuit to the primary circuit running through the heat pump. The proposed piping layout is shown in Figure 1. The heat pump is enabled to operate whenever the outdoor temperature is at or below 55° F. The compressor and primary loop circulator run whenever the loop temperature drops to 120° or less, and turn off when the loop temperature reaches 130° or higher. Can you spot some potential problems with this layout? How would you propose correcting any issues you identify? 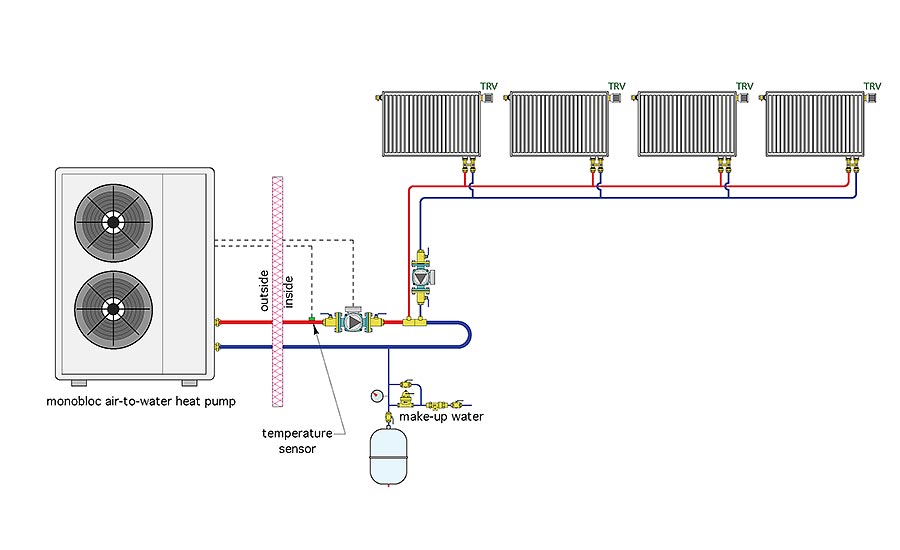 When a single stage/low mass heat source (heat pump or otherwise) is connected to a extensively zoned distribution system, a buffer tank should be used to prevent short-cycling.  There’s nothing about primary/secondary piping that precludes the need for a buffer. You have to have thermal mass.

One configuration that corrects all these deficiencies is shown in Figure 2. 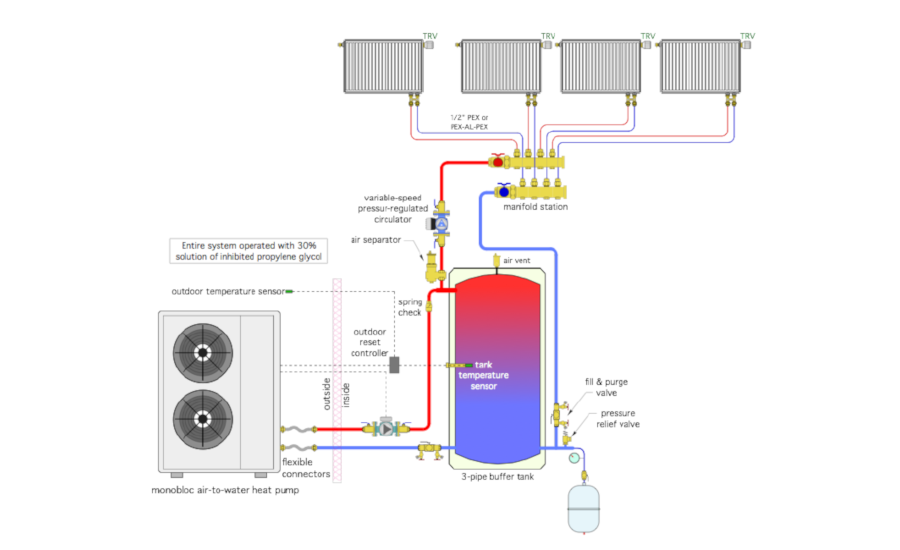 When the heat pump is enabled to operate (typically at beginning of heating season, and for the duration of that season), it monitors the temperature of the buffer tank sensor. The fixed temperature cycling range of 120° to 130°, although attainable, is relatively high for most air-to-water heat pumps.

Operating at those conditions will lower the heat pump’s COP. This has been changed in two ways.

First, the design load temperature swing of the buffer tank was changed to 110° to 120°.  This may increase the required size of the panel radiators slightly, but it’s also going to improve the heat pump’s seasonal COP. Second, since this system only provides space heating, there is no need to maintain design load temperatures in the buffer tank under partial load conditions. An outdoor reset controller, rather than a setpoint controller will be used to determine the average tank temperature. At 50% of design load, the temperature swing of the tank will be 80° to 90°.  The lower the tank temperature, the higher the heat pump’s COP. Some modern air-to-water heat pumps may have outdoor reset capability built in.

The panel radiators are set up as a homerun distribution system using 1/2-inch PEX or PEX-AL-PEX to supply each panel. While this configuration doesn’t guarantee that the right flow will “automatically” be established through each radiator, it does allow the balancing valves on each radiator — or on the manifold station — to be used to adjust the flows as necessary.

Filling and purging valves are provided. The expansion tank has been sized for the added volume of the buffer tank and the 30% solution of propylene glycol, which expands and contracts slightly more than water. No automatic make-up water system is needed. A pressure relief valve has also been added.

Download The Glitch and Fix: October 2020 in pdf form.

The Glitch + The Fix: Primary reduction