The Glitch and Fix: Keep the cost down

An installer is asked to connect an old (but still working) propane-fueled cast-iron boiler, which was salvaged from another project, to a slab-on-grade floor heating system in a new workshop.  The boiler has a rated heating capacity of 70,000 Btu, which also happens to be the output rating of the floor heating distribution system when it is supplied with 105º F water. The client keeps stressing that he wants the least expensive installation.

The installer puts in the system shown in Figure 1. He set the boiler’s aquastat for 115º F, figuring it’s safely above the required supply temperature of the floor heating system. He installs a bypass circulator with the intent of keeping the boiler inlet temperature high enough to prevent sustained flue gas condensation.

Can you identify several things that are going to cause problems, and come up with a better plan using the same boiler? Hint: Don’t be fooled by the color of the lines. 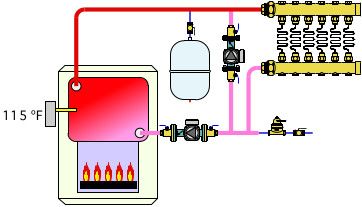 Any conventional boiler (steel, cast-iron or copper tube) operating on propane and a high limit setting of 115º will experience sustained flue gas condensation. However, the boiler is never going to heat the water up to that temperature because the slab can dissipate all the heat the boiler can produce when the supply water temperature to the slab hits 105º. There is no reason for the water temperature to climb any higher, and it won’t, regardless of how much higher the boiler’s high limit controller is set. These water temperatures will hold the boiler’s heat exchanger well below a typical dewpoint temperature of 130º, and thus the boiler will operate with sustained flue gas condensation. The bypass circulator cannot correct for this thermodynamically-induced condition. In short, the boiler, and likely its flue connector piping, is headed for an early and potentially very dangerous demise.

The system configuration shown in Figure 2 is one way to correct for these issues. 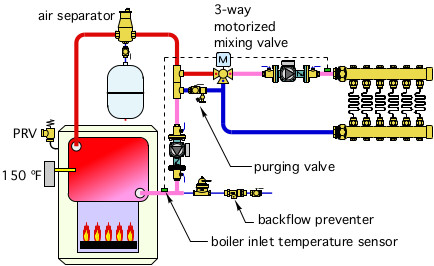 The closely spaced tees provide hydraulic separation between the floor slab circulator and the boiler circulator. They also provide the second mixing point required to boost boiler inlet temperature. This system is equipped with a central deareator and a purging valve in the secondary circuit to the right of the closely spaced tees. The boiler’s high limit setting, in  combination with the boiler inlet temperature sensor and mixing valve controller, will prevent the boiler from operating with sustained flue gas condensation.

Please read here to view The Glitch and Fix: November 2019 in pdf form.