Clean your systems during commissioning.

Water is the “life-blood” of hydronic systems. Its chemical characteristics can make the difference between a system that lasts for decades versus one that develops expensive corrosion issues within months of commissioning.

In past columns, I’ve stressed the benefits of establishing and maintaining good water quality in hydronic heating and cooling systems. Part of those discussions focused on removing dissolved ions created by calcium and magnesium salts, which are commonly found in groundwater. The resulting “demineralized” water would — ideally — have a total dissolved solids (TDS) reading between 10 and 30 parts per million (PPM).

This gives the water just enough electrical conductivity to allow low water cutoff safety devices to function properly, but not enough to support galvanic corrosion. It’s also high enough to prevent the water from scavenging ions from piping materials, which can happen when the water’s TDS number approaches zero.

Although demineralization is the primary method for improving water quality in hydronic systems, its effectiveness is dependent, in part, on establishing physically and chemically “clean” surfaces inside the piping and other components of a closed loop system.

Although it’s easy to think of a newly crafted hydronic piping system as being internally clean — since it was built with all new materials — this is seldom the case.

To begin with, think about how copper or steel tubing makes its way from the mill to a newly assembled system. Those materials are typically handled, transported and stored multiple times — at different locations — before they make it to your job site.

During that time, they can be exposed to dust, rain, wind, pollen, road salt, insects, birds, mice and more. It’s inevitable that contaminants from some of these sources will get into piping that’s not capped at both ends. These contaminants aside, there’s also likely to be some residual of lubricants used during manufacturing.

When copper piping is soldered together, there’s going to be residual flux inside the piping. Threaded steel piping is also going to contain some cutting oil. Cast iron components, especially those that are not internally painted, or that have been stored in high humidity conditions, are going to have internal surface oxidation. There’s also likely to be small pieces of metal inside the pipe from sawing, deburring, reaming, grooving or other metal cutting operations.

These contaminants should be physically removed, to the extent possible, as the system is assembled. In some cases, this is as simple as wiping down components with a clean rag before they are joined together. I know one experienced hydronics pro who pushes and pulls a small wad of clean cloth through every piece of copper tubing that is 4 feet or less in length before joining them into the system.

After physical cleaning has done all it can, the next step is chemical cleaning — giving your systems a healthy and thorough internal bath before filling it with demineralized water.

Internal washing is done by filling the system with water, adding a “hydronic detergent” formulation, which are now available from several suppliers, and circulating this blend through the entire system, with the heat source operating at normal temperature, for at least one hour. Suppliers of these hydronic detergents typically avoid giving out their proprietary formulations, which break down oils and greases within the system and suspends them in the circulating fluid.

At the end of the wash cycle, the wash water is completely drained from the system and disposed of based on the detergent supplier’s directions. Most of the currently available hydronic detergents are biodegradable and can be disposed of in sewer drains. The piping should get a final rinsing flush and drain to remove as much of the wash water as possible.

For residential and small commercial systems, I recommend use of a double-ported purging valve, along with a sump pump and Clean 5 gallon pail for getting the mixture of water and hydronic detergent into smaller systems. The set up is shown in Figure 1. 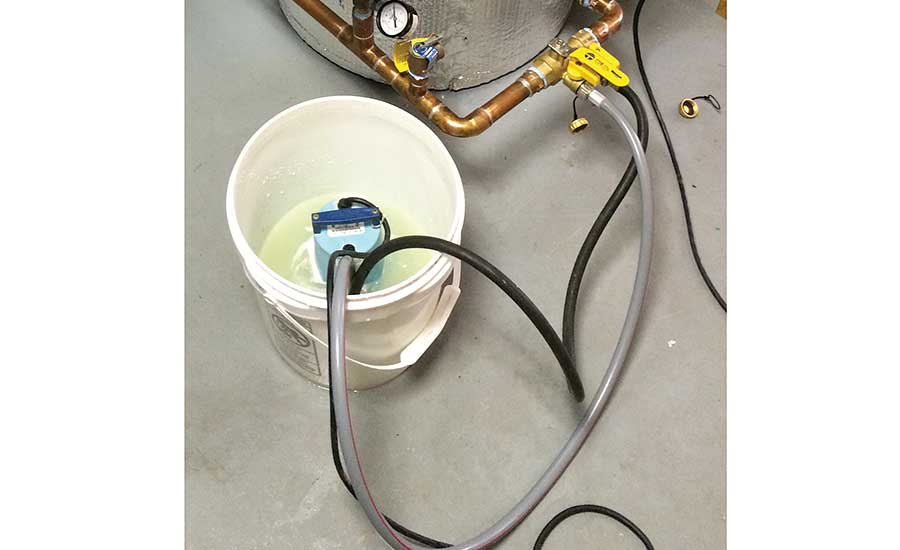 The inline ball within the double-ported purging valve is closed during this process. A hose from the sump pump carries the mix of water and hydronic detergent into the system, the other hose returns it to the pail after it has passed through the system. A clean white pail lets you see what gets flushed out. Keep the fluid level in the pail high enough, and the end of the return hose far enough away from the sump pump to reduce entrained air bubble entry into the system. 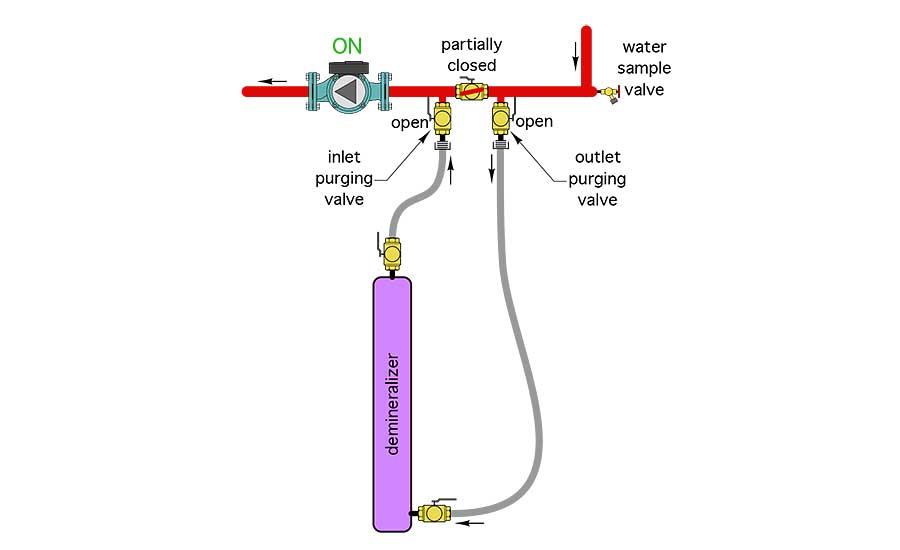 After demineralizing, best practices call for adding a film-forming hydronic system stabilizing formulation. Again, several such products, with proprietary chemical combinations, are available in North America. These products form extremely thin protective films on the inside of the piping and components that help isolate the water from the raw metal surface. They also stabilize the pH of the water, and help protect the system against the slow but unavoidable oxygen entry that occurs over the system’s life.

To keep the system clean you should include high performance air and dirt separation devices in every system. These functions can be achieved with separate devices, or a single device. If the system contains any ferrous metals such as cast-iron or steel — as most systems do — the dirt separating device should include a magnet to capture ferrous oxide particles. I recommend magnetic particle separation for any system containing high efficiency circulators with permanent magnet motors.