This website requires certain cookies to work and uses other cookies to help you have the best experience. By visiting this website, certain cookies have already been set, which you may delete and block. By closing this message or continuing to use our site, you agree to the use of cookies. Visit our updated privacy and cookie policy to learn more.
Home » The Glitch and Fix: How hard can it be?
Radiant & HydronicsThe Glitch & The Fix

The Glitch and Fix: How hard can it be?

An installer was asked to include an air-to-water heat pump into a low-temperature radiant panel heating system supplied by a mod/con boiler. The owner planned to use the heat pump as the sole heat source during shoulder seasons when its COP would be high, as well as during times when off-peak electrical rates were available. The boiler would be the heat source if the heat pump was down for service or during extremely cold weather (-5° F or lower).
The installer extended the distribution system outside as shown in Figure 1. He rationalized this as a way to prevent freezing within the heat pump since some heat from the remainder of the system would be flowing through the heat pump whenever circulator (P1) was operating, and thus there would be no need for antifreeze. Can you spot a few details that are going to cause problems and propose alternative approaches? 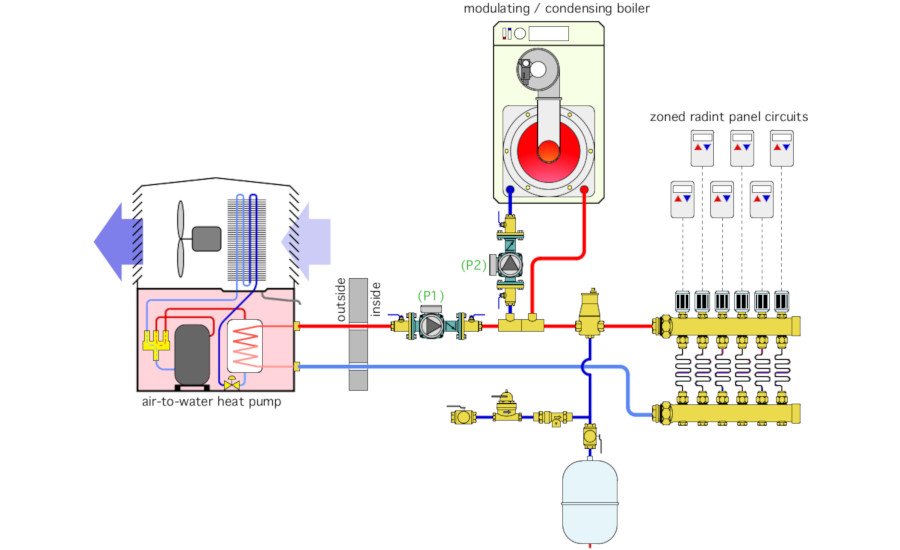 There are several problems with this layout.

One way to correct for these deficiencies is shown in Figure 2. 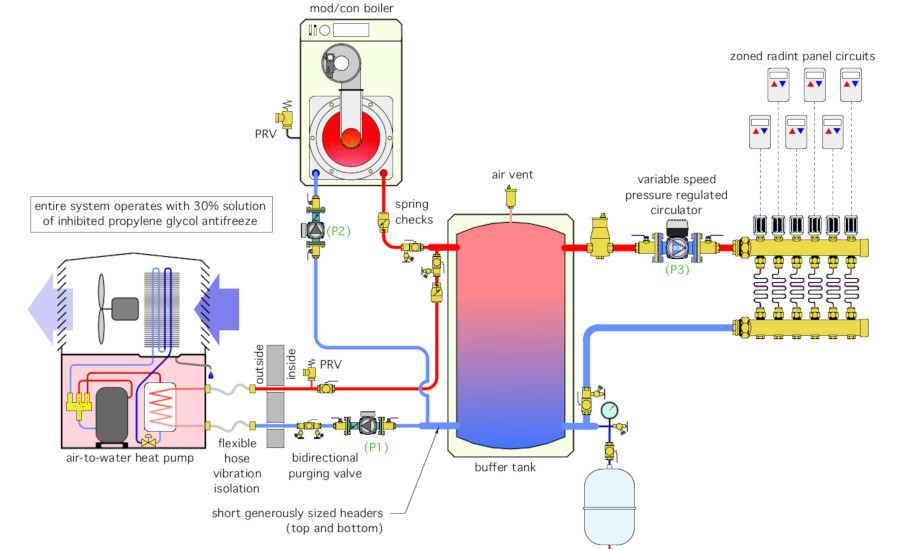 Both heat sources are piped in parallel to the buffer tank. Depending on the control strategy, either heat source could operate independently, or they could operate simultaneously if needed. Either heat source can be isolated if necessary. Because they are combined at the short generously sized tank headers, the buffer tank provide hydraulic separation of circulators (P1) and (P2). Circulator (P3) is a variable speed circulator that’s set for constant differential pressure. Its speed automatically ramps up and down as the manifold valve actuators open and close based on zone demand. This circulator is also hydraulically separated from the other circulators by the buffer tank. Each heat source has a pressure relief valve that would not be isolated from that heat source if the isolation valves for the heat source are closed. The two spring-load check valves prevent reverse circulation through either heat source and stop reverse thermosiphoning from the tank through either heat source. The entire system operates with an antifreeze solution sufficient to prevent freezing of the heat pump during a prolonged power outage in cold weather.

Please read here to view The Glitch and Fix: April 2019 in pdf form.

The Glitch and Fix: I'll do it anyway

The Glitch: Pipe it just like any other boiler

The Glitch and Fix: Keep the cost down