Imagine yourself as a service technician. You’ve just been dispatched to a no-heat call in the early morning hours of a cold winter day. You know nothing about the system that you’re about to meet.

You arrive and are escorted to the basement by the homeowner, who’s obviously very concerned about how quickly you can restore comfort to his family.As you step off the basement stairs you see a boiler, several circulators, zone valves, lots of piping and a lineup of assorted controllers. Maybe something similar to Figure 1.

While looking over this assembly, you hear a relay click, see some LEDs flashing on one of the controllers, and hear the boiler fire, stay on for 30 seconds, and then shut off.

The owner is standing there expecting you to quickly identify the problem and fix it. How do you explain that even as a heating professional you don’t know how this system is supposed to operate?

The homeowner emphasizes that neither he nor anyone else has made changes to the system that could possibly have caused the problem. He goes on to tell you that he has only lived in the house for four years and has no idea of who installed the system. He insists that the boiler has been “serviced” each fall by a local company that supplies propane. You take a closer look at the boiler but there are no indications of what service work was performed. 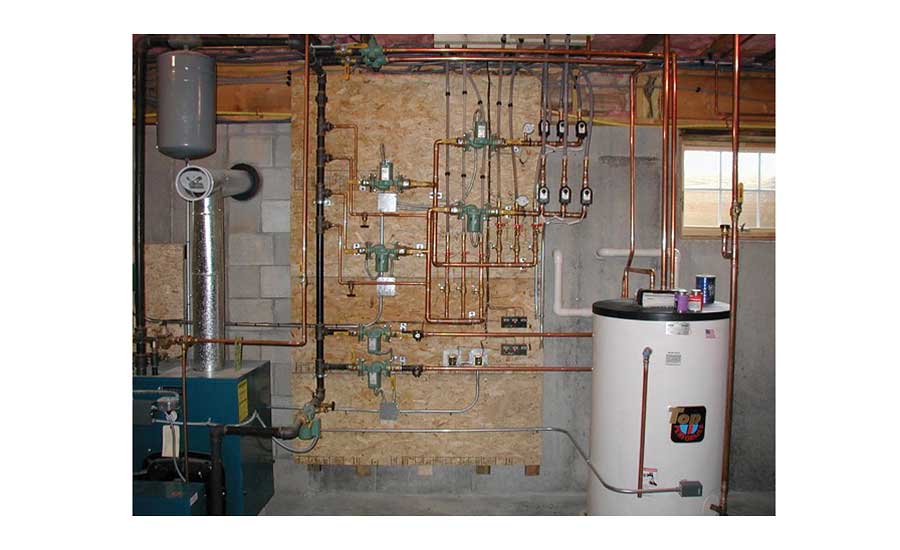 You walk around the area looking for any information that might shed light on how the system was designed — or what the original control settings were — but there’s no documentation anywhere. You start to worry that any control adjustments you might make at this point could make the present situation even worse.

What lies ahead are several hours of trying to figure out what the original designer had in mind. You’re trying to determine how the system should operate when everything is normal. Only then will you be able to begin diagnosing what’s wrong.

If only the heating “professional” who came before you had left some kind of information, rather than a rat’s nest of wiring and layer over layer of piping.

It could have been different

This scenario is not one that any service technician wants to be in. It gives the appearance, at least to the owner, that they and perhaps the company they work for are incompetent.

Although most building owners expect that their heating or cooling systems will eventually require some service, they don’t understand why any reasonably competent service technician shouldn’t be able to quickly identify and fix the problem(s). They’re used to well-trained service techs repairing their vehicles, their refrigerator, and their computers.

From the homeowner’s perspective, why is it necessary for you to spend hours “reconstructing” the original intended operation of their system? Why should the owner be expected to pay for that time?

Situations like this often lead to a rapid spread of negative attitudes as the owner and his family describe their frustrations to others. They’re likely to rant about how their hydronic system is complex, prone to problems, and difficult to service. Such conversations create lasting bad impressions among people that, at some point, will probably influence future purchasing decisions on heating systems.

In today’s market, nearly all manufacturers provide information on the proper installation and servicing of the components they sell. This information is often shipped with the product and is usually also available online. However, a hydronic system is a combination of many individual components — in many cases, a very unique combination. There are no manufacturers that currently sell complete hydronic systems along with associated installation, commissioning and servicing instructions.

From the homeowner’s perspective, why is it necessary for you to spend hours “reconstructing” the original intended operation of their system? Why should the owner be expected to pay for that time?

It falls to the designer to select the components needed in the system and communicate how those components are to be assembled into a complete system. The designer also must ensure compatibility between all selected components. The challenge is to create a stable, efficient and reliable system that is often an assembly of several hundred individual components. This is a task some individuals savor while others view it as far less important than maximizing the profit associated with the installation.

It is also the designer’s professional responsibility to clearly communicate exactly how the selected hardware is to be installed and properly commissioned. The very best design is of marginal value when it’s only “stored” in the designer’s mind.

The level of detail used in documenting the system can make the difference between thousands of dollar worth of hardware that works harmoniously and efficiently as a complete system, or an assembly of hardware that never achieves it performance potential, creates frequent service calls, and repeatedly frustrates all parties involved.

Beyond its use during installation and servicing, good system documentation adds significant value to the project. It demonstrates knowledge, professionalism, commitment to proper installation, and lasting value for a purchase that costs thousands of dollars. Well-prepared documentation sets heating professional who offers it apart from competitors that don’t care enough or know enough to provide it.

Opinions vary on what constitutes proper documentation. Some think that a binder stuffed full of the installation instructions for all the major hardware in the system is sufficient. Their reasoning is that when a piece of hardware breaks, the information on it is in the binder. While that information may indeed be of some value, it’s for a component, and not the system. It doesn’t necessarily help identify the problem.

For example, a system experiences chronic issues with air in the piping. Is it caused by an air vent, an expansion tank, or a circulator? It could be any of these, or a combination of all three. All these components could be functioning as they were intended to, however the way these components were installed, and how they interact with each other could be the cause of the problem.

I suggest that the following materials represent acceptable, but not necessarily optimal, system documentation:

Additional items that complement the above documentation include:

After reading what I’ve suggested for proper documentation, you’re probably thinking that creating such materials is time consuming and expensive. When drawings were produced with T-squares and triangles, it did take several hours to produce accurate and properly cross referenced drawings. Today, however, that process can go much faster using software that is widely available and relatively inexpensive. We’ll get into that in Part 2, so stay tuned.