With an installation area of nearly 200,000 square feet, Viega Climate Mat is having a huge impact on a large job near Sacramento, California. The California Military Department building is a new build in Rancho Cordova. When completed, the building will bring together a variety of demilitarized departments and organizations under one roof.

A total of 344 Climate Mats, ranging from 20 feet to 200 feet in length, are being used in the two-story building. Each of the mats is five feet wide, so a single roll can cover as much as 1,000 square feet. The installers have been blown away by the time savings.

The building is 232,000 square feet, and 198,022 square feet of that has Climate Mat for heating and cooling. Because of the massive size of the project, it was split into nine sections (some larger than others, depending on the shape and location) to be completed individually. At times, Holton says his crews have been able to do between 10,000 and 15,000 square feet a day — something that would never be completed in that timeframe if doing it by hand. He estimated that it takes 20 to 30 minutes to roll out each mat. To complete the radiant system, there are about 10 loops to hook up per manifold, and a total of 92 stainless manifolds on the project.

“I’d say laying the mat is about three times as fast as hand-laying the tube,” Holton says. “The labor savings are extensive. I can’t imagine how much [Climate Mat] has saved us. We would totally be upside down on this project otherwise.”

What’s even more impressive is none of Holton’s crew had done any radiant installation before. Holton himself had done a couple of smaller projects, but he hadn’t used Climate Mat.

“I’ve even had some of the other crew help us. They just pick it up and run with it, because it’s so simple. There’s no big learning curve,” he says. 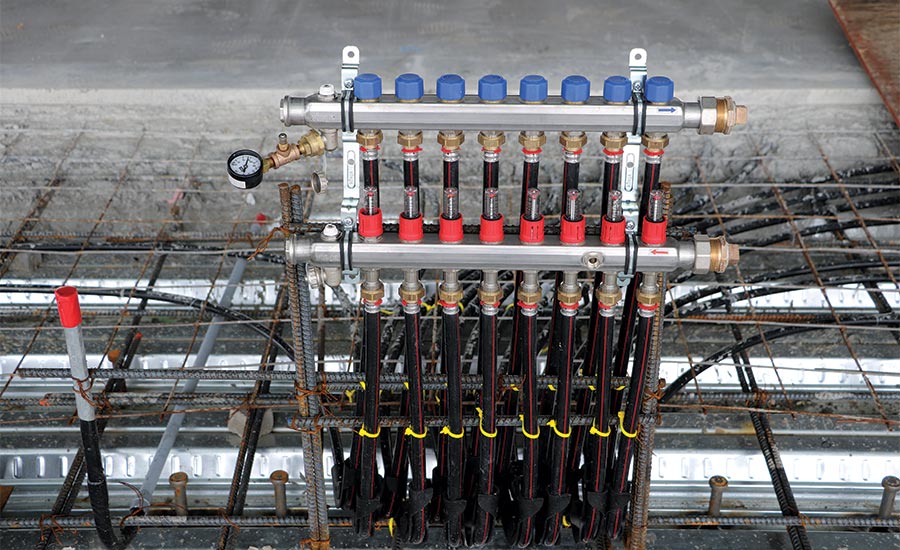 The manifold is where all the tubes from the Climate Mat connect and control temperature.

Although Holton wasn’t involved with the original design of the building or choosing products, he says Viega’s Climate Mats were chosen as a time-saver — and it’s paying off. Unfamiliar with Climate Mat to start, he watched a Viega YouTube video on the product and said he was amazed at how simple it looked.

“I’ve been really impressed with the durability, too,” he says. “I was nervous when we first started, but it’s flexible yet durable.”

He says he was also impressed with Viega’s Design Services team, which was very involved with this large-scale project from the beginning.

“It’s been one of the best things, Viega’s customer service,” Holton says. “We haven’t had to wait a whole day to get a response back to an email if we have an issue or a question.”

Brett Austin, manager of Viega’s Design Services team, says that although this was the largest Climate Mat installation Viega has worked on, everything went smoothly and quickly, thanks to great teamwork by all the professionals involved.

“We held initial meetings with the architect, engineer and contractor, and things took off quickly from there. We worked closely with them to make sure we met all of their needs,” he says. “From Viega’s side, we had many people contribute to the success of this project — from customer service to the production line — and everyone really shined.”

Original plans slated the building to be a Zero Net Energy Project, and the projected calculations show it to be possible. A Zero Net Energy building creates renewable energy onsite that is equal to (or greater than) the energy used by the building on an annual basis. Builders also hope the site will qualify for LEED Gold.

Kristen White is the former public relations and communications manager for Viega.