Use modern hydronic hardware to create a customized system.

One of the benefits of modern hydronic heating is the ability to use multiple types of heat emitters in the same system. A common example is a heated floor slab in a basement combined with fin-tube baseboard on the main living level(s) above. When the fin-tube baseboard is sized around “traditional” design water temperatures (170° F to 200°), the system is going to need a mixing device to lower the water temperature supplied to the floor heating circuits.

Over the years, we’ve designed many systems with mixing devices to create multiple supply water temperatures for different portions of the distribution system. In general these systems have worked well, but mixing assemblies definitely add to the system’s cost and complexity. This should lead hydronic heating pros to consider if, in some applications, multiple types of heat emitters could be operated from a single supply water temperature.

We recently designed such a project, for “discerning” clients (my daughter Heidi and son-in-law Andy). They had definite requirements for how heat would be delivered to each area of their new home.

On the main living level, they wanted floor heating for the kitchen, dining room and two bathrooms. They also wanted floor heating in the slab of a breezeway that connects the house to the garage. The bedrooms and living room floors would be finished with padded carpet, which, from a practical perspective, ruled out floor heating. The modern hydronics alternative — use individually controlled panel radiators in these areas.

This combination of heat emitters were supplied from a geothermal water-to-water heat pump, the performance of which is strongly influenced by the water temperature leaving the condenser. The lower the load water temperature can be, while still maintaining comfort in the house, the higher the heat pump’s coefficient of performance (COP), and the higher its heating capacity. The heat pump used in the system was capable of producing water temperatures up to about 125°, but lower is always better when it comes to COP.

We decided to use a tube and plate radiant panel construction under the subfloor of the kitchen, dining room and bathrooms. The 1/2-inch PEX-AL-PEX tubing was spaced 8 inches apart. Then 5-inch by 24-inch aluminum plates where fit over the tubing and tightly stapled to the underside of the subfloor. Six inch thick fiberglass batts where installed direct-ly under the tubing and plates. The basement space beneath these areas was fully heated.

The floors in the kitchen and dining areas would be finished with 1/2-inch thick engineered hardwood. The floors in the bathrooms would be covered with ceramic tile over 5/16-inch thick Ditra XL anti-fracture membrane. The floor areas in the bathrooms were small enough that a single tubing circuit could easily accommodate the entire heated floor area. The finishing touch was a towel warmer in the master bathroom.

The breezeway is an area where snow and rain will be “tracked” in from outside, and thus a floor that can rapidly dry is desirable. This area also has a relatively high ratio of exposed thermal envelope area per square foot of heated floor area. There would also be some “cubbies” on the floor to store outside clothing, which would partially inhibit upward heat transfer from the floor.

The upward heat flux at design load was about 45 Btu/h/ft2. To handle this, we spaced the tubing at 6-inch centers and decided we could operate this circuit in parallel with (and thus at the same supply water temperature) as the underside tube and plate circuits in the kitchen and dining room areas.

All the heat emitters described above are served by a homerun distribution system using 1/2-inch PEX-AL-PEX tubing. At design load conditions (-10° outside), all emitters will operate with a calculated supply water temperature of 115°.

Do This, Do That

Next came the control requirements. Heidi and Andy wanted a simple “mode” switch with heat, off and cool settings. When that switch is set for heating, the geothermal heat pump maintains warm water in the buffer tank, ready to flow to any active heat emitter.

The kitchen, dining room and living room are one large open space. As such, it made no sense to try to independently control temperature at each heat emitter. The floor heating in the kitchen and dining room areas would operate at the same time as the two panel radiators in the living room. The breezeway circuit would also be operating in parallel with these emitters. 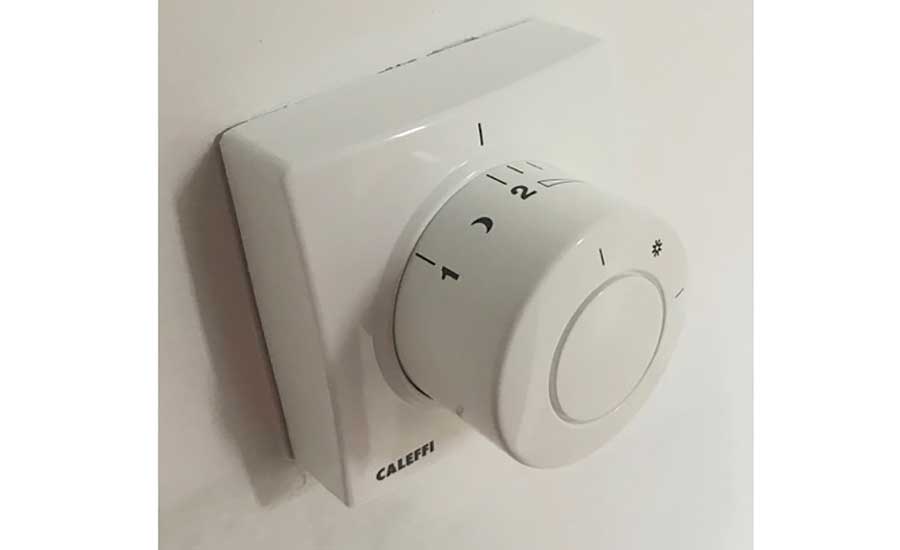 We combined the three floor heating circuits with the two homerun circuits for the panel radiators. All these circuits begin and end at a single manifold station. That manifold station is supplied through a 3/4-inch zone valve tied to the thermostat in the living room.

The panel radiators in the three bedrooms each respond to a non-electric thermostatic radiator valve integrated into each radiator.

The floor heating in one bathroom is also regulated by a thermostatic valve that’s cut into the supply side of the single floor heating circuit and located under the floor. It can be accessed through a small panel in the basement ceiling. A stainless steel capillary tube runs from this valve to a wall mounted knob (see Figure 1), which is used to sense and regulate room temperature just like a non-electric thermostatic valve on a radiator.

The master bathroom floor is also heated by a single circuit. This circuit first connects through the towel warmer and then continues on under the floor. Flow in this circuit is regulated by another non-electric thermostatically controlled underfloor valve connected to a wall-mounted knob by a capillary tube.

The overall topology of this distribution system is shown in Figure 2. 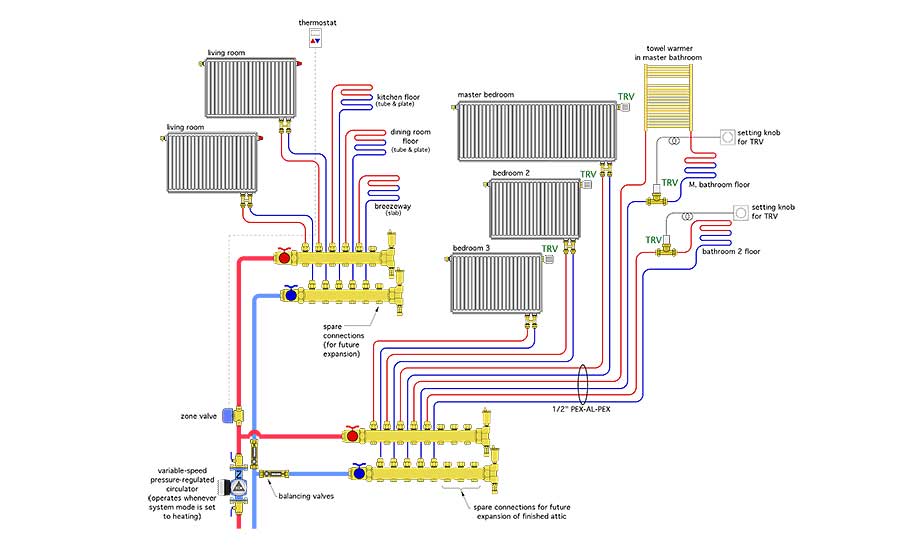 Balancing valves with integral flow meters are installed in both main branches of the distribution system. Flow is provided by a single Taco 0018e variable speed pressure regulated circulator that’s “active” whenever the mode selection switch for the system is set to heating. The input power to this circulator varies from 4 to 44 Watts depending on speed.

This circulator automatically adjusts its speed in response to the opening and closing of the zone valve on one manifold station, or any of the non-electric thermostatic valves supplied through the other manifold station (see Figure 1).

This system is currently maintaining comfortable conditions in all areas using an average supply water temperature of only 100°. The heat pump turns on when the buffer tank temperature drops to 95° and off when that temperature reaches 105°.

Based on manufacturer’s ratings, the heat pump, operating under these load side conditions, and with fluid returning from the horizontal geothermal loop at 50°, will have an average COP of 3.1 (excluding the power draw of the two high efficiency circulators used on the heat pump, which total to about 250 watts). If the circulator Wattage is included, the “net” COP is about 2.97.

You may be wondering why we didn’t use outdoor reset control for the tank temperature, which would allow for lower water temperatures and higher COPs under partial load conditions. The reason we stayed with the 95° to 105° temperature range was to allow domestic hot water preheating using the thermal mass of the 119 gallon buffer tank.

Whenever there’s a draw for hot water of 0.7 gpm or higher, a flow switch activates a small circulator that routes heated water from the top of the buffer tank through a 5-inch x 12-inch x 40-plate stainless steel heat exchanger.

Cold domestic water makes a single counterflow pass though the other side of this heat exchanger. The preheated domestic water flows to the cold water inlet on a 40-gallon electric water heater for a “top off” in temperature. The preheating piping components are shown in Figure 3. 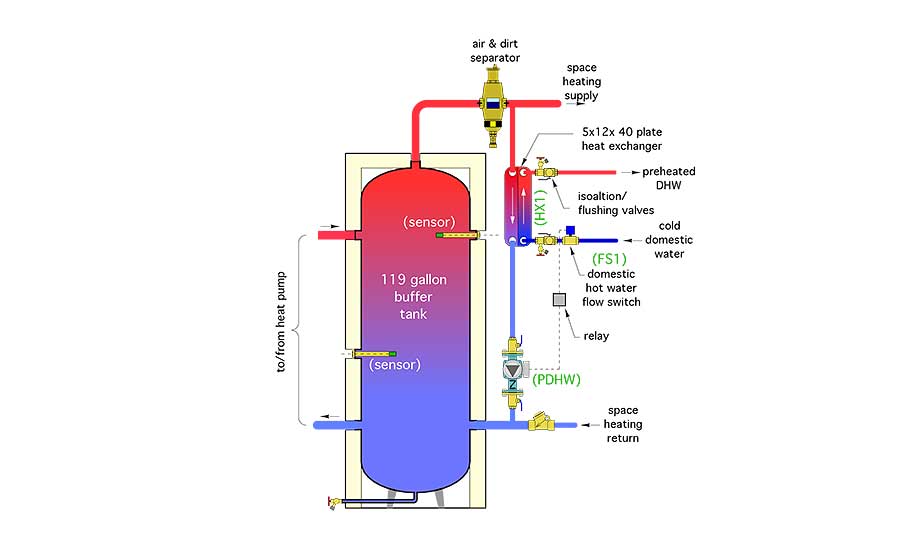 This distribution system, though unique to meet specific owner requirements and building details, was assembled from off-the-shelf hardware.

The tube and plate floor heating, the heated slab in the breezeway, the panel radiators and the towel warmer, in combination with the design heating loads in the spaces these emitters serve, allowed for a single supply water temperature eliminating the need for mixing. That temperature also ensured that the geothermal heat pump would operate at relatively favorable conditions.

As of this writing, the system is operating and the house is very comfortable. The system can respond to internal heat gains or comfort preferences, such as lowering bedroom temperature at night, while at the same time maintaining warm bathroom floors and luxurious dry towels.

The comfort offered by the individual “niceties” in this system could never be matched by ductless heat pumps or other types of forced air systems. It’s my desire that Heidi and Andy will enjoy that comfort thousands of times over the coming years.

Next month, I’ll get into more details on this system.