John Siegenthaler: How 'radiant' are your radiators?

I’ve written it before and I’ll write it again — panel radiators are one of my favorite hydronic heat emitters. I base this sentiment on several benefits. Here are a few to consider…

Panel radiators require far less wall space than fin-tube baseboard sized for equivalent heat output and operating conditions. This reduces restrictions on furniture placement and usually improves aesthetics. Kitchens and bathrooms are rooms where the wall space required for properly sized fin-tube baseboard is often not available. However, because panel radiators come in a wide variety of widths, heights and thicknesses, they can often be integrated into such limited wall spaces, and still provide the necessary heat output.

Here’s an example. At an average water temperature of 110° F, which is well within the performance range of modern hydronic heat pumps, a panel radiator that’s 24 inches tall, 48 inches wide and about 4 inches thick can release as much heat as 22 feet of typical residential fin-tube baseboard. Figure 1 shows this comparison to scale. Which option would you rather accommodate in a typical bedroom?

Most panel radiators contain very little water and relatively small amounts of metal. This results in low thermal mass and allows the panels to respond very quickly to variations in room air temperature or internal heat gains. The possibility of temperature overshooting in rooms with high internal heat gains from sunlight, lights, people or heat-generating equipment gains is far less likely relative to systems that use high thermal mass heat emitters such as older cast-iron radiators or heated floor slabs.

For example, it’s possible to design a homerun distribution system containing multiple panel radiators that can deliver 30,000 Btu/h, using an average water temperature of 110° F and using less than 10 watts of circulator input power. One possibility is shown in Figure 2. 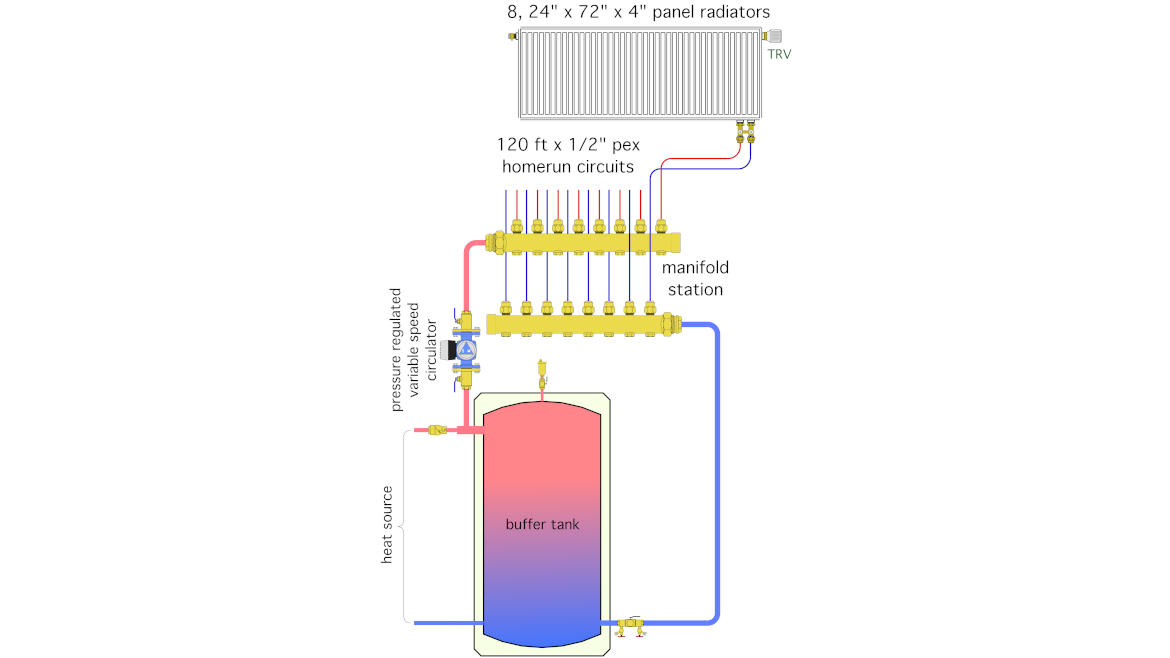 That rate of heat output could easily supply the design load for a modern low-energy house, using a small fraction of the electric power required by an equivalent forced air distribution system. The distribution efficiency of such a system is far above that of a ducted system, or for that matter, a multi-head ductless mini-split heat pump system. These stark differences should matter when reduced energy use is truly a design objective.

Panel radiators lend themselves to relatively simple installation in both new construction and especially in retrofits. If you can route a couple of 1/2-inch PEX tubes from the heat source to the location of the radiator, the rest is simple. Just drill two 3/4-inch holes up through the floor at 2-inch center-to-center spacing, install two spring-loaded “hanger brackets” on the wall, set the panel in place, and tighten the half-unions on the dual isolation valve to the PEX tubing. Figure 3 shows the piping under a typical panel radiator. 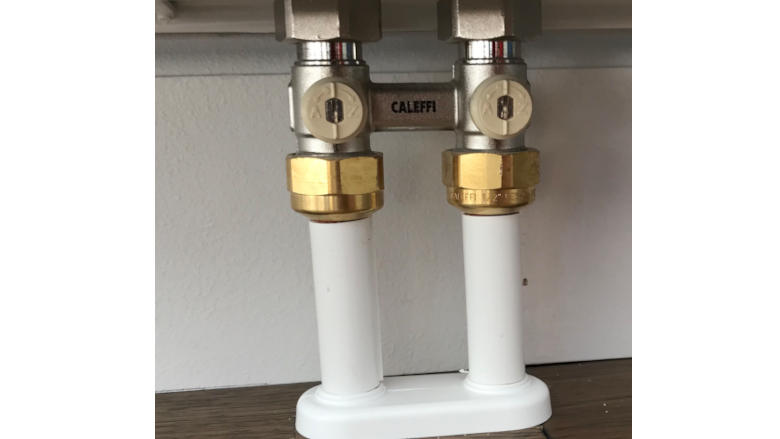 This brings us to benefit No. 6 — panel radiators release heat by convection and thermal radiation.

Convective output is useful when trying to create a rising “curtain” of warm air to wash against the inner surface of a large window. This counteracts the downward draft created by large cool interior surfaces on a cold winter night.

Radiant heat output can be thought of as the “icing on the thermal comfort cake.” It counteracts the dominant method by which the body releases heat produced by metabolism, and as such has a profound effect on comfort. Radiant output also helps increase the mean radiant temperature in rooms, which typically allows comfort to be maintained at slightly lower interior air temperatures.

The proportions of convective vs. radiant output depend on the physical configuration of the panel radiator, as well as the average water temperature at which the radiator operates.

Figure 4 shows three commonly available physical configurations of panel radiators, categorized as the number of “water plates” and the number of rows of fins. 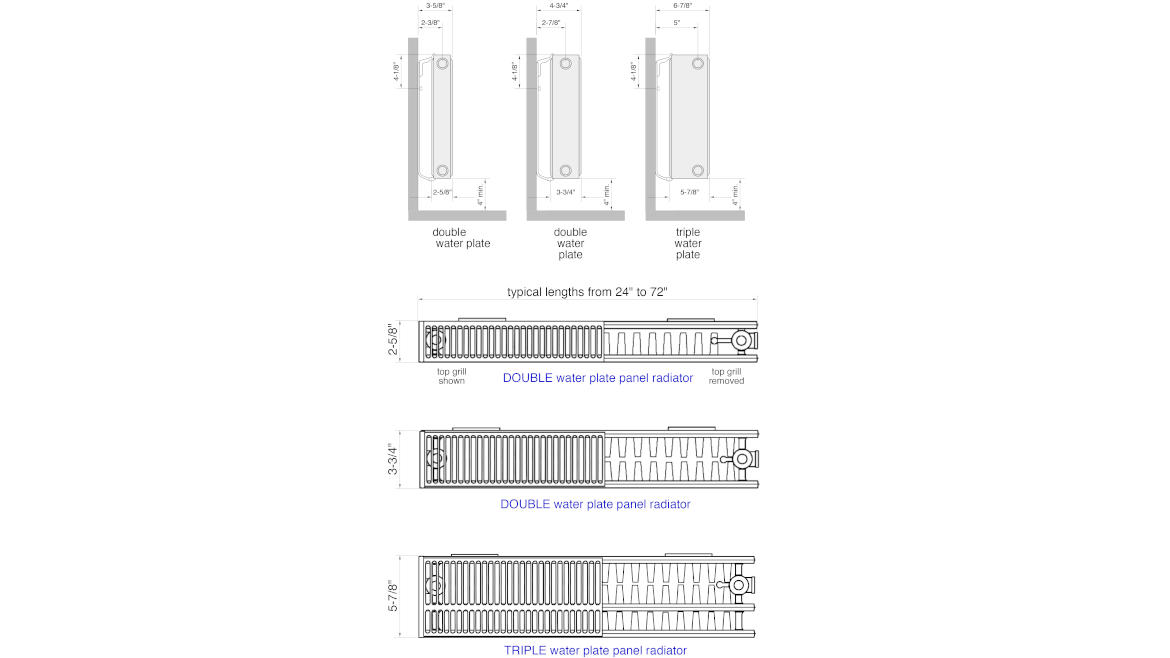 On double water plate radiators, the plates form the flat front and rear surfaces of the radiator.  They are pressure-tight chambers that contain water and have a high ratio of surface area to volume.  The front water plate is responsible for most of the radiant heat output from the panel.

Figure 5 shows the percentage of radiant heat output for a range of panel configurations and plotted against the difference between average water temperature in the panel and room air temperature. 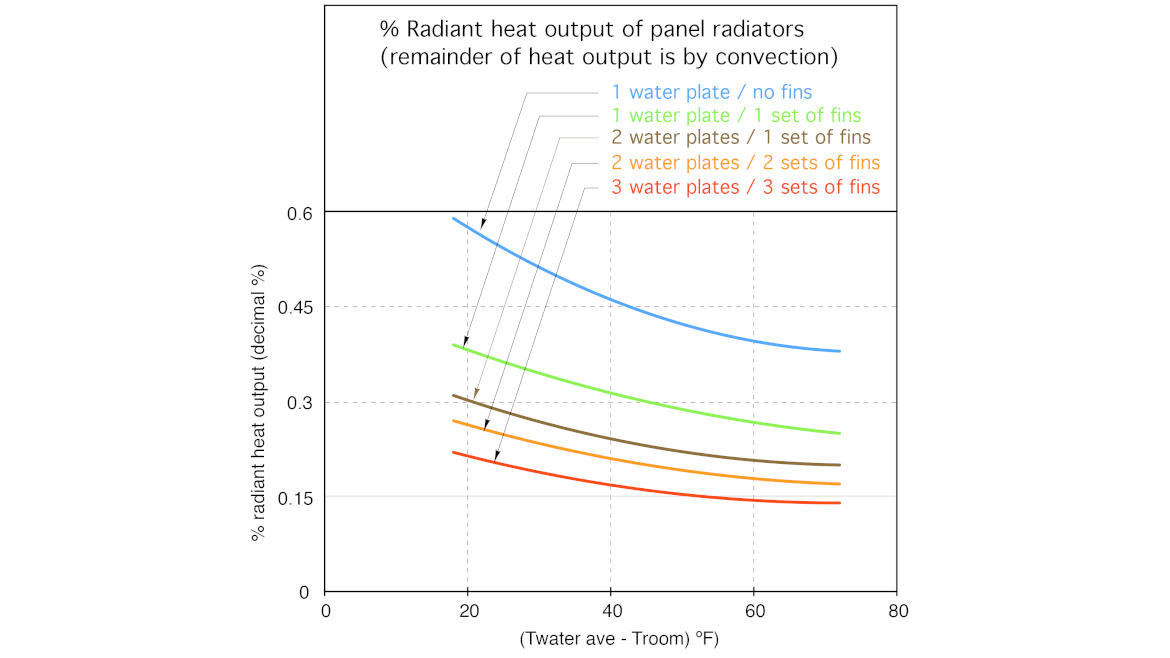 The highest percentage of radiant heat output (almost 60%) is from the “finless” panel operating at an average water temperature about 20° F above room air temperature.

The lowest percentage of radiant heat output comes from a panel with three water plates, three rows of fins and operating at an average water temperature about 70° F above room air temperature.

Based on the comfort benefits of radiant heating, it would seem that single water plate panels with no fins is always the preferred choice. However, each panel also has to be sized based on required heat output and available wall space. It’s often necessary to select panels with two water plates and at least one row of fins to accommodate the latter constraints.

I’ve been delighted with the performance of panel radiators in many of the systems I’ve designed over the years. They allow a wide range of design flexibility, either as an “all-radiator” system, or combined with other heat emitters such as floor, ceiling or radiant wall panels. Panel radiators have a well-established history and continue to represent state-of-the-art technology when combined with modern hydronic heat sources, and other modern hydronics hardware. They’re definitely a resource to leverage in modern system design.