Mechanical Contractor of the Year

Started by Col. James Smith and George Oby back in 1898, Smith & Oby just may be the oldest mechanical contracting firm in Ohio right now, according to President and CEO Mike Brandt. The company is now privately owned with a few shareholders. Throughout its long, storied history, Brandt is only the ninth company CEO.

Smith & Oby is dedicated to both expert craftsmanship and customer satisfaction, with a reputation for overall performance excellence. It has also stayed on the leading edge of technology in order to maintain focus on customer expectations, which is why the company has been named Plumbing & Mechanical’s 2019 Mechanical Contractor of the Year.

Smith & Oby started as a small plumbing contracting business in Canton, Ohio, then moved to Cleveland when it was incorporated in 1898. In the early 1900s, the company specialized in building many mansions in the Cleveland area, gradually moving into healthcare work in the 1920s. 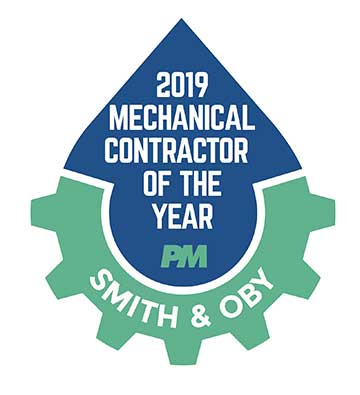 Started by Col. James Smith and George Oby back in 1898, Smith & Oby is Plumbing & Mechanical’s 2019 Mechanical Contractor of the Year.

“There were a lot of larger healthcare projects back in 1920s,” Brandt says. “In 1922, Smith & Oby did the first pipe welding project in the country. It was an Ohio-built telephone company. It was their claim to fame. Some may dispute that, but that’s what our history shows.”

Today, Smith & Oby primarily does commercial HVAC and plumbing work, with well over half of its revenue generated through healthcare projects. The company also does education facilities. In 2012, Smith & Oby purchased DSO Mechanical, a contracting firm in Charleston, West Virginia, specializing in the same healthcare and education markets.

Once you come, you never leave

“Staffing has been pretty consistent,” Brandt says. “The biggest change has been our BIM and engineering department has grown a lot because that’s the way the industry is moving. So that’s where we’ve grown the most staffing-wise. We’ve grown tremendously over the last 10 years. We used to have two employees in that department 10 years ago, and now we’re up to 12. We’re also growing our service division as part of our future plan.”

“We do a lot here,” Brandt notes. “That’s why our retention is so good. We take care of our people. We feel it’s important to retain and recruit by offering good benefits.”

Brandt, a 36-year veteran of Smith & Oby, got his start as a pipefitter apprentice.

“I went to college for a year and decided it wasn’t my path,” Brandt says. “My father was a pipefitter by trade. During my younger days, I would go with him to work in the summer. I liked it. But I thought you had to go to college, so I did. I actually got into the pipefitters apprenticeship program here in Cleveland back in 1983 with Pipefitters Local 120. I started with Smith & Oby. After I completed my apprenticeship, they made me a foreman on a project. At the age of 29, they asked me to buy stock in the company because they didn’t want to lose me. And I just kept moving up the ladder.”

Brandt notes that in today’s world, it is unusual to spend a whole career at one company, but Smith & Oby has many such long-term employees.

Ted Macfarlane is one such example. Macfarlane decided he had enough working for a public accounting firm and decided he wanted a controller-type position with a family run company. He ended up at Smith & Oby and is still there 27 years later as its chief financial officer.

“I wasn’t looking for a construction job as much as I was looking to work for a company like Smith & Oby,” he says. “It’s just exactly what I was hoping to find. It’s a mid-sized company, so there’s a lot of work going on. It’s still challenging to me as a CPA. I find it challenging, but also, there’s a sense here that we’re all important. Everybody’s job counts. Everybody here is a person, not a number and it’s just a great atmosphere to work in.”

Macfarlane notes that he looks at the same two people outside his office as when he started with the company.

“I’m still sort of the new guy,” he says. “It’s not a family business, but it feels like one. You feel like you’re working for your family. It’s a nice, relaxed environment. We all work hard, have the same goal in mind and that’s why I’m still here.”

“I found out college wasn’t for me and my father was a pipefitter, so that’s the route I chose,” he says. “I was fortunate enough to get in with Smith & Oby, and I’ve never left. I like it here because there were a lot of opportunities for me and I took advantage of it. After my apprenticeship, they gave me the opportunity to become a foreman. And I wanted to keep challenging myself, so they kept giving me larger and larger jobs. Now, I’ve moved up the ladder and I have my nose in every one of our construction jobs and all the field guys work under my direction.”

“They love it here because they are treated well,” he says. “Very rarely do we have somebody that quits to take another job with another contractor. As long as our workflow stays the way it is, they’re happy to stay here. They’ve had opportunities to go on overtime jobs and stuff like that to make a little bit more money, but they choose not to do that. They like the type of work that we do and the people that we have in our group.”

Venus Mathis got her start with the company 29 years ago when she answered an agency ad for a receptionist. Now she handles payroll for the business.

“It was a long time ago, but I had young children at the time,” she explains. “I took a year off, and when I decided to back to work and went on the interview, I was impressed. I’ve stayed here all this time because it’s challenging and I enjoy it. The company is goal-driven, but very family-oriented. They make it comfortable for you to have a family life. You have some flexibility and that’s really what made me take the job. Believe it or not, that long ago, that’s what made me decide to take the job.”

Smith & Oby has no difficulty standing out from the competition. It markets itself as a full-service mechanical contractor, completing all HVAC, plumbing, piping and sheet metal in-house. It also has its own service division.

“The service division does start up and maintains the building once we’re complete,” Brandt says. “And as I mentioned previously, we have our own BIM and engineering department as well as pipe and sheet metal fabrication shops. We invested in those 10 to 15 years ago, and that gives us the opportunity to help dictate schedules, so we don’t have to rely on other contractors to fabricate pipe or sheet metal for us. A lot of companies subcontract their BIM and fabrication work. I guess that’s the biggest differential. We’re a full service contractor. We don’t rely on anybody to get the work done. In our industry, it’s going that way, but in our market, we’re one of the only ones in Cleveland. When we go for an interview, that’s how we differentiate ourselves from others. We can do it all.”

Brandt is heavily involved in industry organization and associations and encourages his employees to also get involved. Smith & Oby belongs to MCA of Cleveland, MSCA, SMACNA and MCAA – in fact, Brandt is the immediate past president of the latter.

“Being involved with these organizations gives us opportunities for educational resources and networking,” he says. “Being involved is important for the success of our company. Right now, we have numerous individuals sitting on association committees. And it gives us the opportunity to help shape the future of our industry. I’ve sat on numerous committees and boards. It brings tremendous return both personally and for the company as a whole. I feel you get more out of it than you put into it.

“It’s important for us to be involved because we don’t want to sit back, wait and watch; we want to be part of shaping our industry for the future,” Brandt continues. “We try to get as many of our people involved in different committees as possible so we stay involved.”

Like every contractor around the country, Smith & Oby is battling the ongoing labor shortage. The company utilizes apprenticeship programs as much as possible, Brandt notes.

“I’m a chairman of our apprenticeship program for pipefitters, so we use the program to bring in future leaders in the industry,” he says. “We’ve also, had some luck working with unions and organizing skilled labor, that’s mainly in our service division.”

Additionally, with the help of MCAA, the company brings in students from Kent State University’s construction management program as interns.

“We bring them into the industry and teach them about mechanical contracting,” Brandt says. “After graduation, we bring them on as full time employees. I’ve had about four of them who have gone through the internship and joined the company after graduation. That’s worked pretty well for us.”

As far as the future goes, Brandt intends to keep Smith & Oby profitable and growing by remaining the contractor of choice in Northeast Ohio.

“As long as we do that, many opportunities will be available,” he says. “One of the largest opportunities for growth is our service side. We’ve already grown more than 80% in service over the past three years.

“I just love this industry,” Brandt continues. “This is a relationship business and I really enjoy making new ones and building on existing relationships. It’s all about being involved and giving back. I wouldn’t be where I am today if I hadn’t gotten involved early on, and its benefitted me both personally and professionally. I learned so much getting involved early – that’s why I stress it so much to others. Get involved and learn.”