This website requires certain cookies to work and uses other cookies to help you have the best experience. By visiting this website, certain cookies have already been set, which you may delete and block. By closing this message or continuing to use our site, you agree to the use of cookies. Visit our updated privacy and cookie policy to learn more.
Home » Let it snow, but please keep the rain
ColumnistsPlumbing NewsWater QualityJulius Ballanco: Plumbing Primer

Let it snow, but please keep the rain

Julius Ballanco P.E., CPD
KEYWORDS drains / plumbers and pipefitters
Order Reprints
No Comments
By now, you may have seen an article or news release about the American Society of Plumbing Engineers Research Foundationreport on storm drainage. For the past few months, this research report has been a hot topic of discussion. 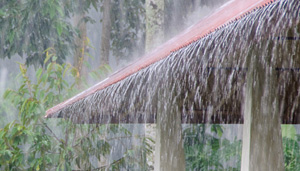 I admit that the author of this research report is yours truly. I took the hard test results from the research and tried to make sense out of them. The old saying in engineering is, “Numbers and facts don’t lie, it is the interpretation you have to watch out for.”

The testing of 60 roof drains was done by IAPMO R&T Laboratories in Ontario, Calif. The lab built a roof mock-up in which it could test the flow rates through a roof drain during a heavy rainstorm. This research got started when an increase was reported in the number of failures from roof storm-drainage systems.

Before I go too far, a failure does not mean that the roof collapsed, although there have been a number of collapsed roofs. Other failures include: fittings blowing apart inside the building; water backing up on the balcony decks at lower levels; and manholes blowing off in the street or sidewalk. There are other types failures, but you get the idea.

When I received the data and had to interpret it, my first impression was, “This is mind blowing.” I was really freaked out.

What became immediately obvious to me is that the way we have been sizing storm drainage systems for the last 80 years has been wrong. That’s right, we have been doing it wrong since they first added sizing requirements to the plumbing codes.

The problem most people have is that the sizing methodology is hidden within cryptic plumbing code tables. When you read the tables, the sizing is based on the area of the roof and the rainfall rate. It seems easy enough, but you never know how much water is designed to flow in the storm drainage pipe.

Unlike sanitary drainage piping, the storm drainage sizing method is based on full flow, not half the full flow. Hence, twice as much water can flow down the pipe when compared to a sanitary drainage system. The stacks are designed for one-third full flow, which is considered the maximum flow rate for nonerratic open channel flow. Simply stated, it means the pressure doesn’t increase significantly in the pipe. If it was pressurized flow, the pressure would increase 0.433 psi per ft. When you mention 7 in. of water column pressure, that is nothing.

One of the things missing in this entire equation for sizing a storm drainage system is how much water flows through the roof drain. This never enters into the calculation or the plumbing code sizing tables.

As you can imagine, the more water ponding at the roof drain, the greater the flow rate. At minimal ponding rates, the flow rate is minimal.

During most storms, rainfall is very light. You are dealing with rain falling at a rate of perhaps 1/2 in. per hour. Any storm drainage system should easily handle this low rainfall rate.

The plumbing code requires the system to handle a 100-year storm of one hour intensity, which is a  method of reporting rainfall intensity by the National Weather Bureau. A 100-year, one hour-storm is nasty. Yes, it is only supposed to occur every 100 years but that isn’t always the case.

A new term that you may have heard is “microburst.” These are very intense storms that occur for a short period of time, dumping rainfall at a very high rate. I investigated one storm when 2 in. of rain fell in about 20 minutes.

What you find in the ASPE RF research report is that most roof drains can handle these higher flow rates. The problem is the roof drains overload the piping system during heavy rain storms. That can be as bad as overloading the roof with water.

Plumbing contractors have been asking for simplified test results. If I had to simplify, I would say that you will see smaller roof drains connected to larger pipe. For steeper-sloped roofs, you may see larger roof drains with larger pipe. Again, it will depend on the design of the roof.

I encourage you to download the 121-page ASPE RF research report. It includes many charts and graphs, so it is easy reading. The report is available for download from the ASPE website at www.aspe.org/researchfoundation. In the report you will find that roof drains are not consistent between manufacturers. Manufacturer A’s drains will not match the performance requirements of Manufacturer F’s drains.

Everyone keeps asking who is Manufacturer A, Manufacturer B, etc. That you will never know — unless the manufacturer tells you. Part of the agreement of testing the drains was to report the results blindly. Hence, no manufacturer is identified in the report.

If you are doing a large roof area, I would question the engineer who did the design of the storm drainage system. Don’t be caught with an undersized system. If the engineer doesn’t know about the changes, educate him and give him a copy of the report.

For design-build contractors, I would recommend you start modifying the way you design storm drainage systems. Look for the plumbing codes to change to the new sizing concepts in the near future. I also would suspect that the roof drain manufacturers will start to publish the flow rates through their roof drains for a given height of ponding.

Julius Ballanco: Is the product listed?

Julius Ballanco, P.E., CPD, F-ASPE, is president of J.B. Engineering and Code Consulting, P.C. in Munster, Ind. He can be reached at by email at jbengineer@aol.com.

Rain, Rain, can I use you again?

The 38,000 square foot Summit Complex proved challenging, and required prefabrication of anything possible at a lower elevation.

Dan Holohan: When luck fails you

Banging pipes: What the pros should know

Jobsite efficiency at the forefront of new PHVAC tool design

Matt Michel: 12 essential principles about the business side of plumbing