The Glitch + The Fix: Pellet particulars

Because the price of fuel oil has increased dramatically over the last several months, an installer with lots of experience in installing conventional oil-fired boilers is asked to install a pellet-fired boiler. The boiler will supply a low-temperature floor heating system with a design output of 200,000 Btu/r. The installer understands that pellet boilers need thermal storage tanks, but assumes that many of the other installation details will be the same as for the oil-fired systems he’s worked with. The system he installs is shown in Figure 1. Can you look it over and diagnose what some of the problems might be? Can you propose a better design that would eliminate these problems? 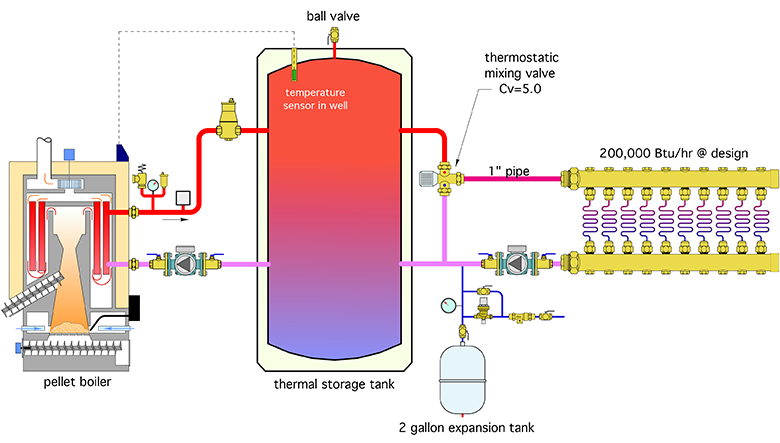 A couple of other observations are in order before moving to the fix.

A single temperature sensor at the top of the tank, along with a setpoint and differential in not the optimal way to operate a pellet boiler. A better scenario is to turn on the pellet boiler when an upper tank sensor drops to some minimum value, and keep the boiler running until a lower tank temperature sensor reaches some relatively high temperature. This helps to “stack” more heat into the tank during each boiler operating cycle. It also lengthens the boiler on-cycles to improve efficiency and decrease particulate emissions.

Figure 2 shows a design that addresses and corrects for the issues listed above. 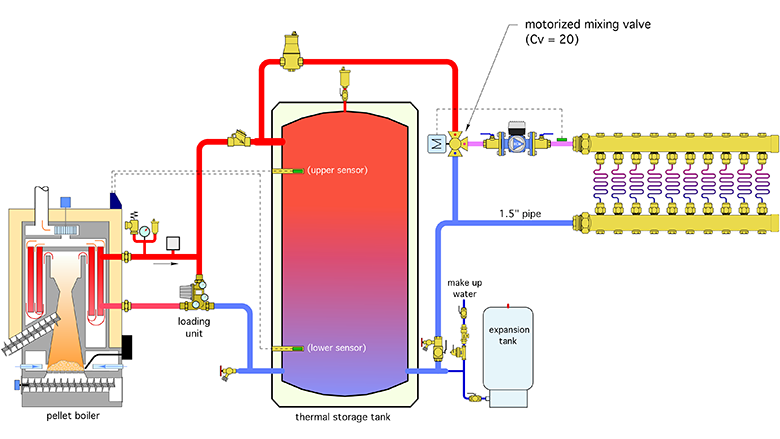 The loading center combines a circulator and thermostatic mixing valve.  The latter keeps the return flow to the pellet boiler above dewpoint whenever possible.

A swing check valve has been added at the upper side inlet of the tank to prevent reverse thermosiphon flow through  boiler when it’s off.

A motorized mixing valve with a Cv of 20 provides minimal pressure drop and accurate regulation of supply water temperature. It could be operated in either setpoint or outdoor reset mode.  The latter is preferred since it allows the tank to drop to lower temperatures during mild weather, which increases subsequent on-cycle time of the pellet boiler.

The thermal storage tank is piped in a “3-pipe” configuration which allows the hottest water from the boiler to flow directly to the load when both the load and boiler are operating at the same time. The side connections on the tank are much closer to the top and bottom of the tank.

Upper and lower temperature sensors are used to control the firing of the pellet boiler.

A float-type air vent and service valve are added to the top of the tank.