Things to consider before planning your piping layout.

A zone is any area of a building for which indoor air temperature is controlled by a single thermostat (or other type of temperature controller). A zone can be as small as a single room, or it may be as large as an entire building. Multi-zone systems have the potential to provide two important benefits not available in single-zone systems, namely:

Multi-zone hydronic systems are easy to create, much easier than their forced-air counterparts. Several hardware options exist for implementing zoning in different types of distribution systems. However, before attempting to layout a zoned distribution system, it’s important to evaluate how zoning can best be implemented in the building. The goal is to maximize the benefits of zoning while keeping the system affordable, energy efficient, reliable and as simple as possible at the same time.

In some cases, hydronic zoning has been “oversold.” For example, potential clients — and even some heating professionals — sometimes think the more zones a system has, the better it is designed. This is not necessarily true. Just because it is possible to create a separate zone for every room does not mean it is the best choice. In some cases, the extra piping and control hardware necessary for room-by-room zoning adds complexity and cost without returning tangible benefits. Dividing a system into an excessive number of zones may even create operational problems such as heat source short-cycling. It can also add to system maintenance requirements, again without returning any benefit to the owner.

Here are several factors designers should consider when deciding how to best implement zoning.

No occupied space can undergo a drop in temperature of several degrees over 1 to 2 minutes simply by stopping heat input. Similarly, no practical heating system can instantly raise the temperature of an occupied space by several degrees. The time required to cool down or warm up a zone is significantly affected by the thermal mass of the heat emitter(s) and the building itself. The greater the thermal mass of the heating system and building components, the slower the decrease in indoor temperature when heat input to the zone stops. This is illustrated in Figure 1. 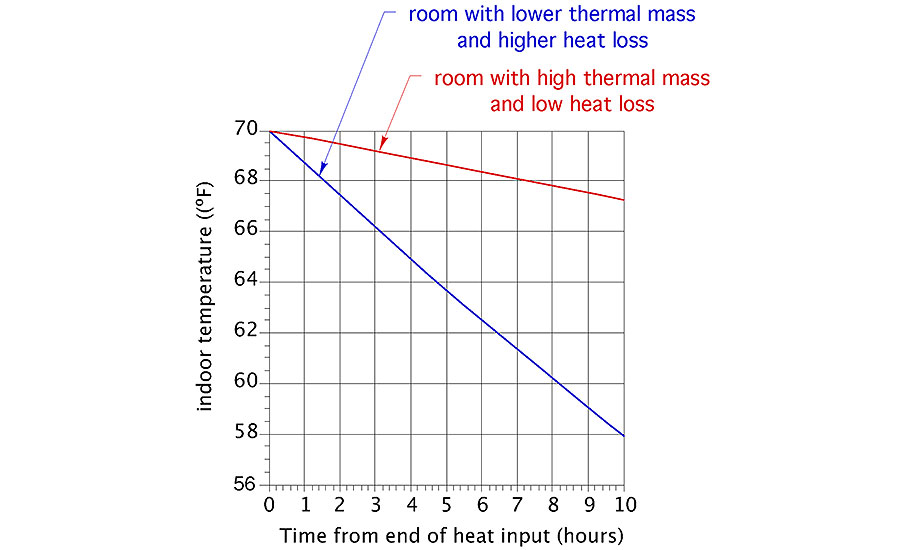 A very well-insulated room (or an entire building) with high thermal mass might only experience a temperature drop of 3° to 5° F over a cold midwinter nighttime lasting eight to 10 hours, even with its heating system completely off. If the occupants reduced the thermostat setting from 70° to 60° at night, the inside air temperature would not decrease to the reduced setpoint before morning. The energy savings potential of such a situation is very limited. If the thermostat were turned down 10° or even 20°, the results would be the same.

The thermal mass of the heat emitter also affects the recovery period when the setback ends. Low thermal mass heat emitters, such as finned-tube convectors, can usually restore a room that has been set back 10° to normal comfort in perhaps 15 to 30 minutes. High thermal mass systems, such as a heated concrete slab-on-grade floor, can take several hours to bring a space back to normal comfort temperature following a prolonged setback period. This is illustrated in Figure 2, which shows the simulated heating of both medium-mass and high-mass radiant floor panels, starting at an initial temperature of 60°, and having a sustained heat input rate of 60,000 Btu/h. 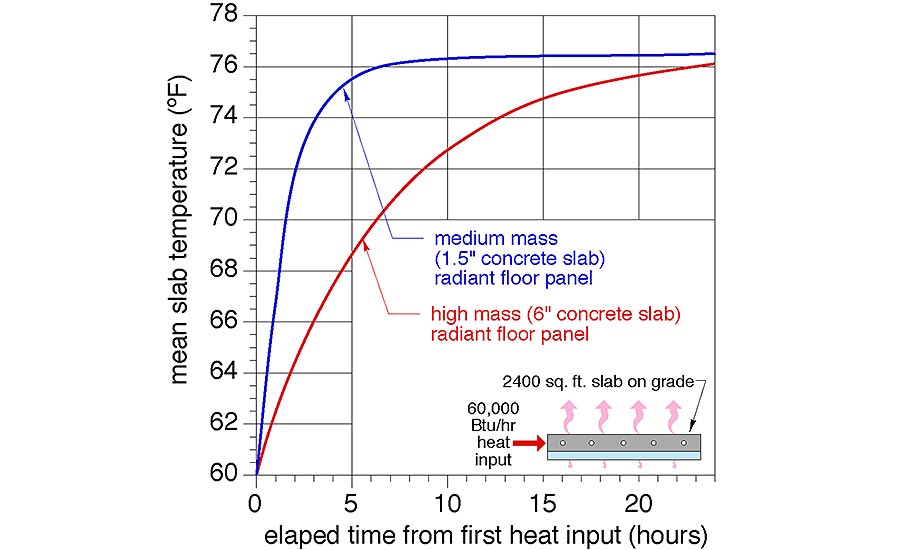 It’s important not to use heat emitters with significantly different thermal mass in the same zone when that zone will operate with frequent changes in setpoint temperature. Because their response times during both cool down and warm up are so different, neither type of heat emitter is likely to produce acceptable comfort during the transition periods between stable setpoint temperatures.

It’s also important to realize that the energy conservation potential of a high thermal mass-zoned system is very dependent on the duration of any reduced thermostat setting. If a zone can be maintained at a reduced temperature for several days, the energy conservation potential can be significant. However, attempting to create significant temperature changes on a daily basis in zones with high thermal mass heat emitters is futile. The energy savings will be very small, and the potential for temperature overshoot and undershoot will be significant. This characteristic should be explained to eventual owners who may not understand how high-mass systems respond to changes in the thermostat settings.

Another factor affecting zoning performance is inter-zone heat transfer. This refers to heat transfer through interior partitions as the building attempts to equalize temperature differences from one room to another. For example, if a particular room is kept at 65° while an adjacent room is kept at 75°, heat will flow from the warmer to the cooler room through the wall separating them. This partially defeats attempts to maintain temperature differences by zoning. The greater the thermal resistance of the exterior envelope of the building, the harder it is to maintain significant temperature differences between rooms separated by uninsulated interior partitions.

Another consideration that helps determine the cost effectiveness of zoning is the willingness of the occupants to regulate the system. It might seem obvious that an owner who is willing to pay more for an extensively zoned system would also be willing to regulate it. However, experience has proven that this is not always true, especially when nonprogrammable thermostats are used. Given modern lifestyles people often forget to regulate their heating systems.

Different rooms within a single zone (e.g., controlled by a single thermostat) and supplied with the same water temperature can still be maintained at different temperatures by adjusting the flow rate through individual heat emitters, assuming these rooms are not all served by a series piping circuit. Flow balancing is usually adequate when the goal is to maintain several rooms at different (but stable) temperatures.

Room-by-room zoning is justified in situations where several rooms are to have both different and frequently changing air temperatures. It can also be justified when the added cost of room-by-room zoning is relatively small. A good example of the latter is when panel radiators, each equipped with thermostatic valve actuators and piped into either a homerun or “1-pipe” distribution system, are used as heat emitters. These distinctions should be discussed with eventual owners before committing several hundred dollars for extensive zoning controls that may seldom be used.

Rooms with large south-facing windows may, at times, be totally heated by solar heat gains. Rooms in the same building that do not receive solar gain may still require heat input. Well-planned zoning separates rooms with likely solar heat gain from those without such gains. It also accommodates the fact that the rooms receiving solar heat gain change over the course of the day as the sun moves across the sky.

It’s also important to use heat emitters with low thermal mass in areas subject to large and highly variable heat gain from the sun or other internal heat sources. The low-mass heat emitters can quickly start and stop heat input as necessary. This is especially important in modern buildings having very low rates of heat loss.

Many people prefer to sleep in cool bedrooms. Good zoning design allows for this possibility. It’s common to zone a residential system so one or more bedrooms are controlled as a single zone. Another common strategy is to create one zone for the master bedroom, with a separate zone for the master bathroom. This allows the bathroom to remain comfortable even when the bedroom is cool.

Exercise rooms are also good candidates for separate zoning, as are rooms that are frequently unoccupied (guest rooms, hobby rooms, etc.). Rooms where occupants have moderate to high activity levels should be zoned separately from rooms with sedentary occupants.

It’s unnecessary to maintain normal human thermal comfort conditions in spaces that are infrequently occupied. Examples of such spaces include basements, garages, guest quarters and workshops. Garages, if heated, are usually maintained at air temperatures of 45° to perhaps 60°, and again are usually set up as a separate zone. In cold climates, the garage zone is usually designed to operate with antifreeze. This allows the garage zone to be completely turned off, if desired, without the risk of freezing.

Entry vestibules with exterior doors and doors into fully heated spaces are good candidates for separate zoning. In some cases, the goal is to maintain the vestibule at higher temperatures to help buffer interior spaces from cold air gusts when the exterior door is opened. When floor heating is used in such areas, the floor surface temperature is often maintained several degrees above that of other interior areas to help dry tracked-in moisture.

Rooms with minimal exterior exposure will have small heating loads relative to their floor area. When such rooms are controlled as separate zones, overheating can be minimized. Rooms that have no surfaces exposed to the outside typically do not need heat emitters.