Back to hydronics basics

Nine years ago this month I retired from the faculty at Mohawk Valley Community College in Utica, N.Y. It was the end of 27 years of teaching everything from drafting to engineering dynamics and — you guessed it — hydronic heating.

One reminiscence of my time at MVCC always brings back smiles. It happened during my last few days at the college. I was sitting in my cubicle-with-a-door office thinking about how I would ever clean up what had been accumulating since Ronald Reagan took office.

There was a knock at the door.

“Hi, I’m Jack, and I teach psychology here at MVCC,” he said. “Would you mind if I ask you a really simple and stupid question?”

I smiled and welcomed Jack to sit down among the stacks of papers, books and other mostly outdated accumulations. Jack starting talking.

“I’m adding onto my house. My plumber said that my water heater produces so much extra heat that I can just run the water from it through tubing in the floor and heat the addition rather than waste the heat. It seems like I would still have to pay for that heat, but am I missing something?”

I explained that water heaters have a small niche in the hydronic heating market. They’re acceptable, to some people, in situations where a small addition needs heat, but the remainder of the building has something other than hydronic heating.

Jack followed up with another question, just to be sure: “But even in those cases the owner has to pay for the heat, right?”

That’s right — when it comes to a fuel-burning or electric heat source, there’s no such thing as surplus heat.

We went on to discuss how a boiler was specifically designed to supply space heating whereas a domestic water heater was not — how the efficiency of a modern boiler in converting fuel to heated water would be better than that of a standard tank-type water heater burning the same fuel.

In situations where a water heater did serve as the hydronic heat source, I stressed how the potable water in that heater needed to be separated from the water circulating through the space-heating system. A stainless steel heat exchanger along with a bronze or stainless circulator was needed.

The space heating distribution system would also need its own circulator along with an expansion tank, air separator, fill/purging valves and pressure relief valve. By the time all this additional hardware was purchased and installed, the “savings” associated with using the water heater as the hydronic heat source was either small or nonexistent.

Depending on the thermal efficiency and life expectancy of the water heater in a space heating application, the net life-cycle cost might even be higher than that associated with using a boiler.

After our conversation, the psychology professor left with a smile on his face. It was based on having been assured that extra Btu aren’t just waiting to be discovered and put to use. Score one for the shrink — his knowledge of basic science helped him sort through a situation that seemed too good to be true.

Knowledge of basic science does that. It helps you decide if your next flash of technical inspiration is really possible, or just something that might be accomplished on a movie set using special effects.

Time and again I come across questions and design sketches that could have benefited from a bit of scientific introspective, especially before thousands of dollars’ worth of hardware demonstrates that physics trumps inspiration every time.

To that end, I recommend you apply a few of the following basics to every hydronic system you work with:

It has to go somewhere; therefore, the following is always true for any device operating at a steady state condition: Energy in = energy out.

If the system is not operating at steady-state conditions, the equation becomes: Energy in = energy out + energy stored. Most heating systems seldom operate at steady state conditions, so there’s usually energy being absorbed or released from the thermal mass of the components in the system.

Temperature change is the evidence of these energy flows. If the temperature of an object is increasing, that object is absorbing energy faster than it’s releasing it. You can watch this on the temperature dial of most boilers when they first turn on.

If the temperature of an object is decreasing, it’s releasing energy faster than it’s taking on energy. Watch the water temperature indicator on a boiler after a large cold zone circuit has just turned on. It will drop as heat is temporarily removed from the boiler faster than the burner can replace it.

When the temperature of an object is steady, the rate of energy flow into and out of that device are equal.

These thermal-equilibrium water temperatures aren’t necessarily going to deliver the right amount of heat where it’s needed. They might not even allow the system to operate at safe conditions. The water flowing through the system doesn’t care about those things. It only cares about trying to achieve a balance between heat absorption and heat release.

Consider a hypothetical hydronic system in which a boiler, rated at 50,000 Btu/h output, was connected in a simple piping circuit containing 25 feet of residential finned-tube baseboard. Next, imagine you removed all the safety controls and valves, installed a circulator, filled the system with water and turned it on. What would happen?

Based on a few calculations, I determined that the average water temperature in the 25 feet of baseboard would have to be 397° to dissipate heat at 50,000 Btu/h.

Impossible, you say? Not necessarily (at least in concept). If the boiler and other components could handle a pressure of, say, 200 psi, this system could — and would — achieve thermal equilibrium at 397°. Would this be safe and fall within acceptable practice or code requirements? Absolutely not. Would it be where the system wants to operate? Absolutely.

Another example of how thermal equilibrium might show up is illustrated in Figure 1. 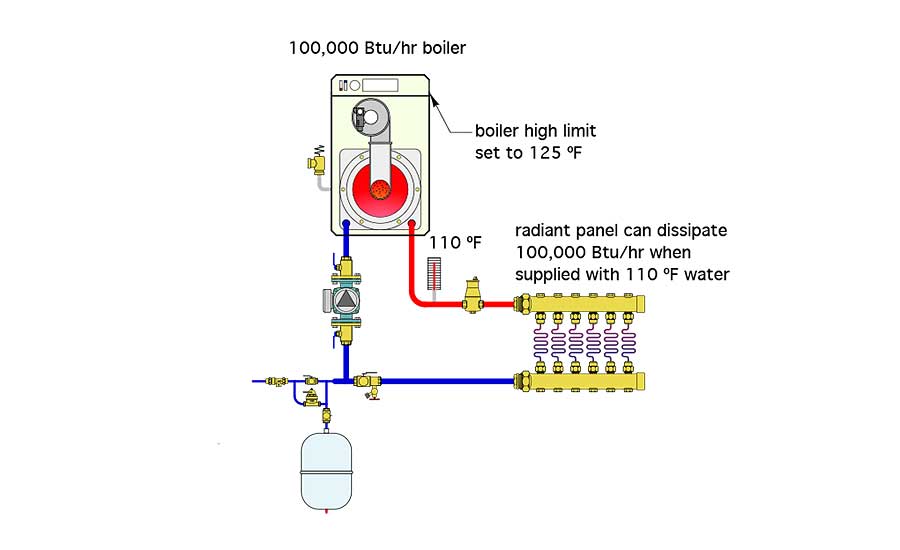 In this case, a boiler, rated at 100,000 Btu/h heat output has been connected directly to a radiant panel heating system. That heating system can dissipate 100,000 Btu/h into its building when supplied with 110° water. However, the installer doesn’t know this. Instead, he thinks the water temperature needs to be 125° and sets the temperature controller on the boiler for that value.

Assume the room thermostat controlling the boiler is set high to ensure the system keeps running. The boiler fires at full rate, and eventually the water temperature leaving the boiler stabilizes at 110°. The installer becomes frustrated because the boiler’s temperature controller is set for 125°, and it’s just not getting there. He can’t figure out what’s wrong with the boiler.

There’s nothing wrong with the boiler. This system simply settled into its thermal equilibrium condition at a supply temperature of 110°. There’s no need for the water to climb to a higher temperature since the boiler is inputting its maximum heat production rate (100,000 Btu/h), and all that heat input is being dissipated by the radiant panel systems. The water in the system doesn’t care about the temperature setting on the boiler — it only cares about balancing heat input rate with heat dissipation rate, and it’s perfectly content when the supply temperature from the boiler to the radiant panel reaches 110°.

Our task in designing hydronic systems is to recognize that:

So, just like my former colleague the psychology professor, stand back and see if the systems you design or troubleshoot comply with these basic (and relatively simple) scientific principles. Remember, thermodynamics isn’t just a good idea — it’s the law.

Wishing you and your family a blessed Christmas and Happy New Year.