One of the most important details is preventing heat migration from the primary loop into an inactive secondary circuit.

Weighted plug flow check valves are still available for several suppliers and can still be used for the above described purpose. However, many modern systems now use spring-loaded check valves to accomplish the same function. The light spring pressure within these valves holds the disk against its seat to prevent forward flow until the pressure differential reaches about 0.5 psi. The spring check valve can be a separate component or a cartridge inserted in the volute of small hydronic circulators. When used as a separate component, there should be at least 12 pipe diameters of straight pipe upstream of the check valve to reduce turbulence entering the valve. If not attenuated, turbulence can cause rattling sounds in some check valves that have metal-to-metal contact between the movable disk and its seat.

A weak thermosiphon flow can develop within the return side piping of a secondary circuit, even when a flow check or spring-loaded check valve is installed on the supply side of the circuit. Hotter water will slowly rise through the center portion of the pipe’s cross section, while water in contact with the pipe walls cools and descends. This effect is not as strong as forward thermosiphon flow, but it can still be annoying and ideally it should be prevented. 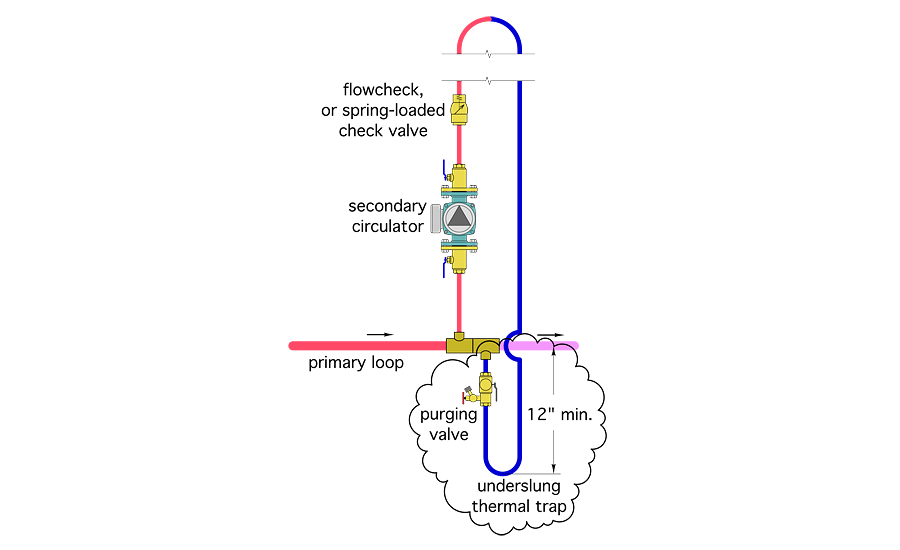 I first read about this in the 1990s. I was intrigued by the concept that hot water would not push downward due to its reduced density. It seemed a thermal trap would be less expensive to create relative to installing another flow check valve. It would be more hydrodynamically efficient (e.g., create less head loss than a flow check valve). Lower head loss is always preferred because it allows a given circulator to achieve a higher flow rate in a circuit — all other detail being the same.

I pondered the following: If a thermal trap could prevent heat migration on the return side of a secondary circuit, why couldn’t it do the same thing on the supply side? Why not use two thermal traps and completely eliminate the need for a cast-iron flow check valve in the circuit?

In addition to cost savings and lower head loss this would reduce iron-to-copper connections in the system, which is better from the standpoint of minimizing galvanic corrosion.  It would eliminate having to solder in two MPT x C (male pipe thread to copper) adapter fittings between the copper tubing and FPT body of the flow check valve.

Back in the 1990s, when primary/secondary piping was the darling of the hydronics trade, any incremental improvement in how such systems could be designed or installed would probably be well received. So, inspired by the potential benefits of dual thermal traps I designed a multiload primary/secondary system using them on all secondary circuits.

When that system went into operation, the anticipation of thinking I’d found a new and improved way to stop heat migration quickly turned into disappointing results.

My disappointment was followed by determination to figure out why this arrangement didn’t work as expected. It turns out the diagnosis was logical and — as the saying goes — hindsight is 20/20.

Take a look at the double underslung thermal traps in Figure 2. 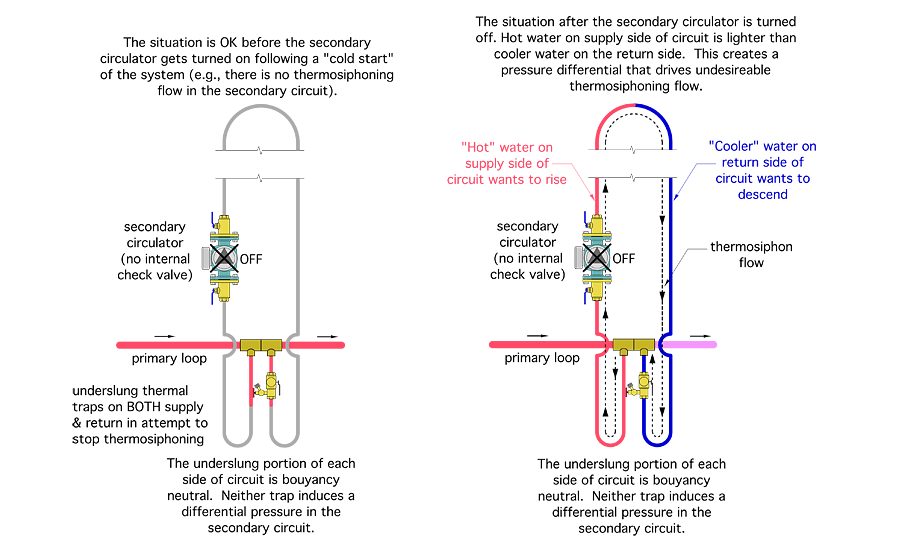 Unfortunately, this is not the case for the secondary piping above the primary loop. Hot water on the supply side has lower density than cooler water on the return side. The result is a self-perpetuating differential pressure that’s sufficient to carry heat well into the secondary circuit at times when there’s no demand for heat from that circuit. Overheating is the obvious result. This is especially true if one of the secondary circuits operates for domestic water heating during summer when none of the other loads served by the primary loop requires heat.

This article was originally titled “Double dipping” in the September 2016 print edition of Plumbing & Mechanical.