CO is the leading cause of poisoning in the U.S.

The students in the dormitory started complaining of headaches and nausea. When the number of students with the same symptoms kept rising, the administration knew something was wrong. The maintenance department dispatched a service technician to investigate. Before the technician arrived, the fire department arrived on the scene. They discovered elevated levels of carbon monoxide in the building. Higher CO levels were recorded in the mechanical room. The students were evacuated and many were sent to the hospital for evaluation. Luckily, there were no deaths. I was curious how something like this could happen.

The underground equipment room had two boilers, an air handling unit and a water heater. One wall featured an exhaust fan vented to the outside. The other wall had a makeup air unit sized to deliver combustion air for the burners and to replace the air removed by the exhaust fan. Typically, these should be electrically tied together, so both must operate simultaneously. In this case, they were not.

The makeup air fan tripped on a manual reset control and stopped running. The exhaust fan kept running. This caused the boiler room to enter a negative condition. Did you know it only takes about -0.02" w.c., to pull the flame or flue gases from an atmospheric burner? The exhaust fan pulled the flue gases from the boilers and water heater into the equipment room. Duct leaks on the return duct for the air handling unit pulled the flue gases into the air handling unit and sent them throughout the building.

The owner replaced the boilers, water heater, exhaust fan and makeup/combustion air fan. They also sealed all the return joints on the duct to eliminate any possibility of infiltration into the air handling unit. The engineer ensured the new makeup air system was electrically tied into the exhaust fan and gas-fired appliances to eliminate the possibility of a reoccurrence. 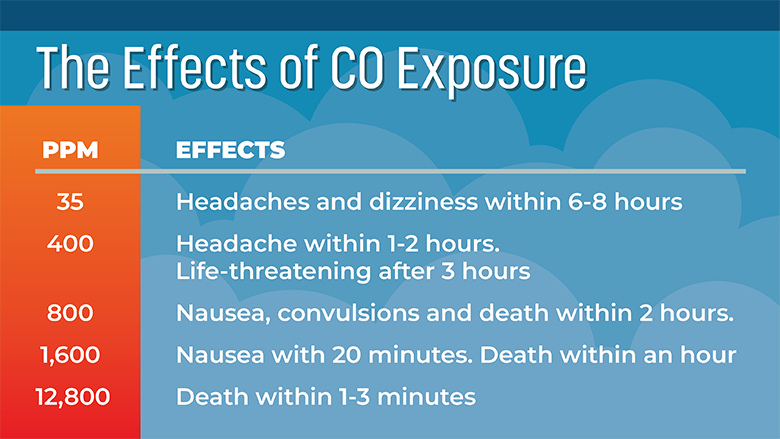 As I think about this incident, I am thankful the technician arrived after the fire department. If the tech had entered the boiler room without a carbon monoxide detector, he would have been unknowingly exposed to high levels of carbon monoxide. Life as a repair tech can be dangerous because they typically work alone. It may have been several hours before someone checked on the technician. Being exposed for that long could be life-threatening. It’s always a good idea to use a carbon monoxide detector when going into an equipment room.

We all know the dangers of carbon monoxide exposure, but I wanted to share some things you may not have known. Carbon monoxide is the leading cause of poisoning in the U.S. It results in about 50,000 hospital emergency room visits a year according to the Centers for Disease Control and Prevention. Around 170 people die yearly in the United States from CO produced by non-automotive products.

Life as a repair tech can be dangerous as they typically work alone. It may have been several hours before someone checked on the technician. Being exposed for that long could be life-threatening. It’s always a good idea to use a carbon monoxide detector when going into an equipment room.

Did you know that many people who have complained of "hauntings" have been found to have high levels of CO in their blood? One of the side effects of acute CO exposure is hallucinations. In addition, acute CO exposure could cause tachycardia, hypotension, malaise, fatigue, atrial fibrillation, delirium/psychosis, dizziness, short-term memory loss, confusion/depression, hyperglycemia, seizures and respiratory arrest.

Between 10 to 30% of those exposed to high levels of CO experience cognitive changes, personality changes, parkinsonism, dementia and psychosis for up to a year after the exposure.

Did you know that CO is flammable? During World War II, it was used as a vehicle fuel. CO can ignite very quickly and cause a fire to spread.

CO can be produced in ovens. Since 1926, stoves have been permitted to produce up to 800 parts per million of CO. Keeping a window open while baking is a good idea. Since CO is created because of incomplete combustion, many feel safer with an electric range than with a gas-fired range. While heating should not produce carbon monoxide in an electric oven, CO is sometimes created when food spilled inside the oven is burned.

CO detectors should be installed in every equipment room with fuel-fired appliances and should be replaced every seven to 10 years.

Ray Wohlfarth is the author of “Lessons Learned in a Boiler Room: A common-sense approach to servicing and installing commercial boilers.” In his spare time, he is president of Fire & Ice in Pittsburgh, Pa. Ray writes a monthly newsletter on commercial boilers. He can be reached at 412/343-4110.