This website requires certain cookies to work and uses other cookies to help you have the best experience. By visiting this website, certain cookies have already been set, which you may delete and block. By closing this message or continuing to use our site, you agree to the use of cookies. Visit our updated privacy and cookie policy to learn more.
Home » Truck of the Month: Air high fives for the win
Market SectorsTruck of the MonthPlumbing News

Truck of the Month: Air high fives for the win

After working for a plumbing company who wouldn’t give him a day off, Levi Torres and his wife, Cassi Torres, decided to start their own plumbing business in 2012. The couple wanted a company that supported its employees and served every customer with professionalism and respect, and High 5 Plumbing was born.

“It all started with a high five, literally,” notes Cassi Torres. “When Levi and I decided to start the company, we were going back and forth trying to decide on a name. I finally came up with one, and Levi said, ‘That’s a good one — high five!’ As soon as our hands connected, we completely forgot what the other name was because we knew it should be High 5 Plumbing.”

Levi Torres is a second generation plumber, working for his father while in high school. He received his apprentice card at 16 years old and has worked in the plumbing industry since. While he worked at other plumbing companies, it was the time with his father that taught him to excel at solving plumbing issues and most importantly, how to treat customers.

After a decade, High 5 Plumbing now has a second location in Littleton, Colorado. The company has grown to 50 employees and 20 fleet vehicles made up of 2019 Chevrolet Express and 2021 Ford Transit vans. For installs, the company uses a Chevrolet Express van with a Spartan box body.

“The new Transits are what our team prefers the most,” Cassi Torres says. “The combination of storage and comfort makes it popular with the High 5 Team.”

High 5 Plumbing’s truck wraps are bold and colorful, with eye-popping blue and yellow over a black and white background.

“We wanted a brighter look that was more eye-catching,” notes Cassi Torres. “We recognize that our trucks are moving billboards on wheels, so we want to make sure we catch the attention of drivers on the road.”

Given the fact that the company has heard countless stories of people giving “air” high fives at stop lights as the trucks service the Denver metro area, the Torres’s accomplished their goal.

“When Levi and I decided to start the company, we were going back and forth trying to decide on a name. I finally came up with one, and Levi said, ‘That’s a good one — high five!’ As soon as our hands connected, we completely forgot what the other name was because we knew it should be High 5 Plumbing.” – CASSI TORRES 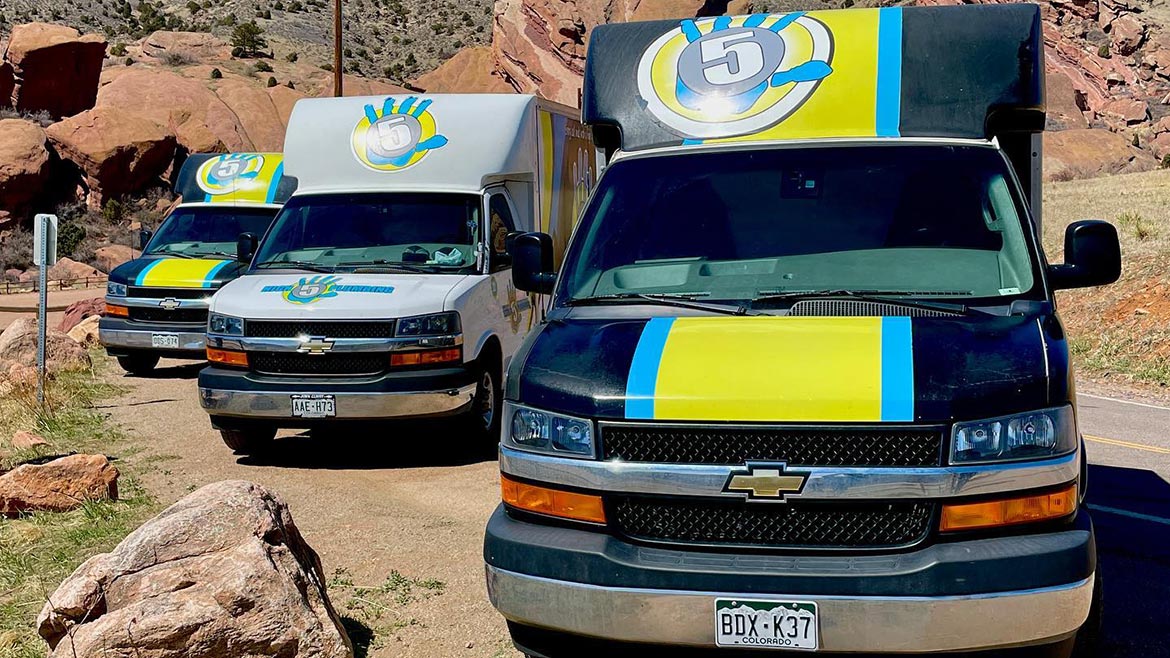 “When we decided on the name, I reached out to one of the most creative people I know, my older brother Joe Torres, who owns and operates Torres Builders in Southern Colorado,” Levi Torres adds. “We talked about the ideas I had and the goal I wanted to accomplish with the logo. I wanted it to be a sign of positivity, but I also wanted it to be powerful. We talked on the phone for about an hour. The first draft he sent me was exactly what I wanted it to be. The blue and yellow together created a very positive color scheme with the bold font. It turned out perfectly.”

Notably, the truck design focuses on the company’s brand, High 5, but also allows room for growth into other home service trades.

“We own the trademark for High 5 Electric, High 5 HVAC and High 5 Home Services,” Cassi Torres explains. “We did this so when we add other home service offerings in the future, we can keep the trucks similar to the brand.”

High 5 Plumbing also has two charity service trucks, one at each of its locations, that feature different truck wraps. At the Denver location, the truck has a Colorado flag themed wrap, while the Littleton location features the freedom truck, which was wrapped in red, white and blue to showcase the company’s support for the military. 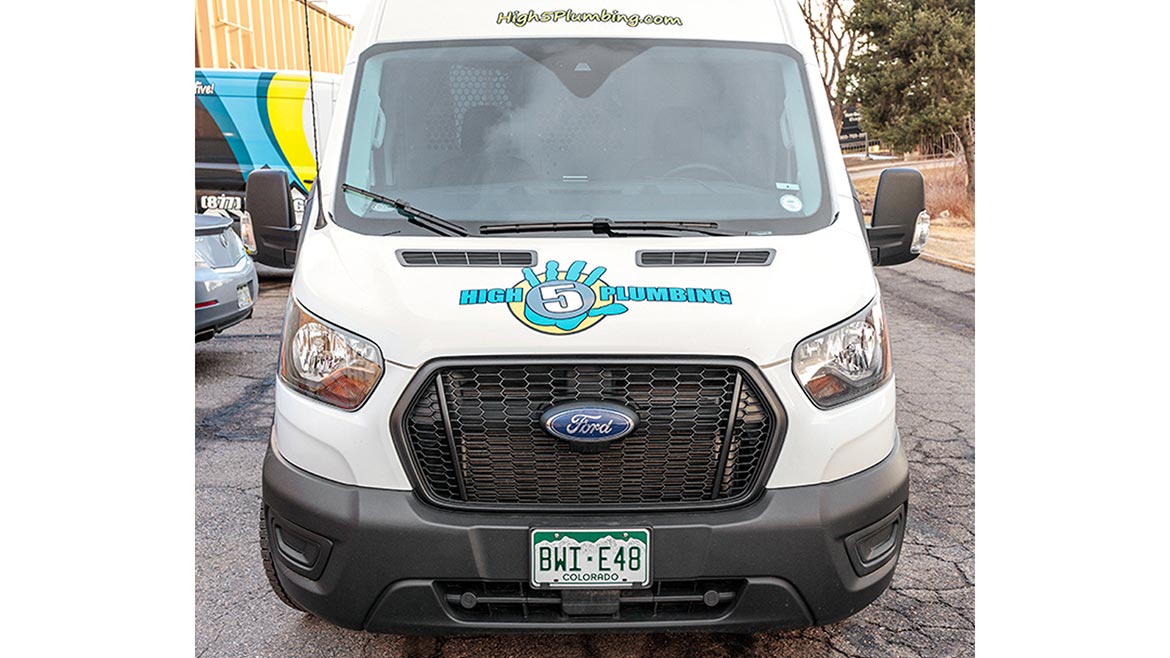 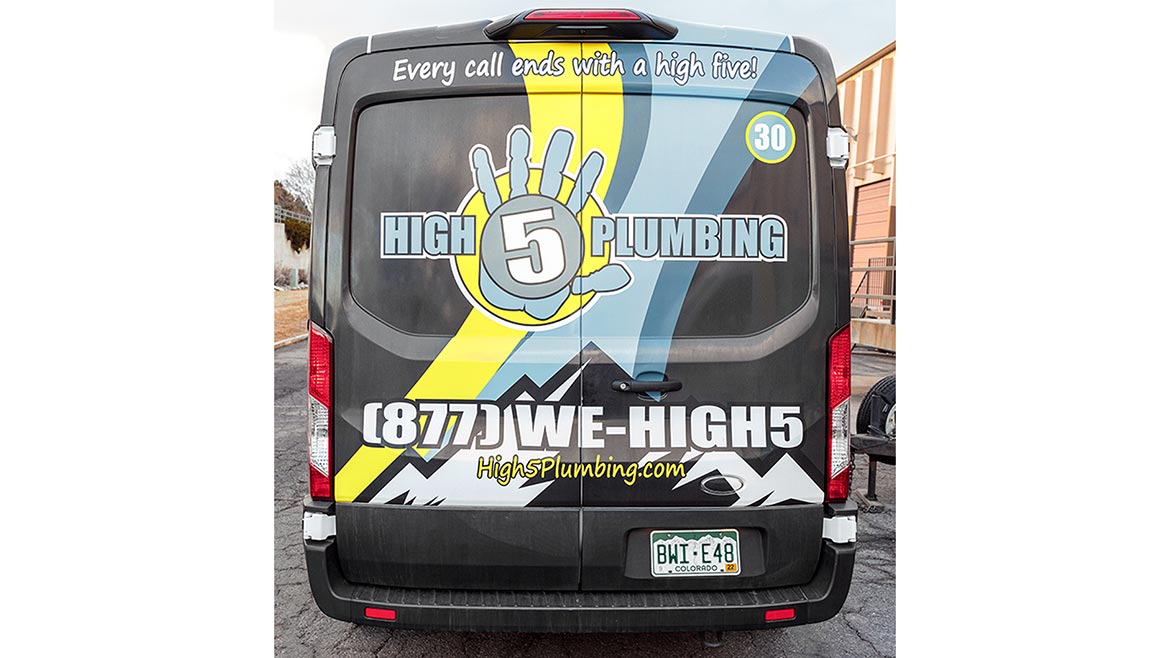 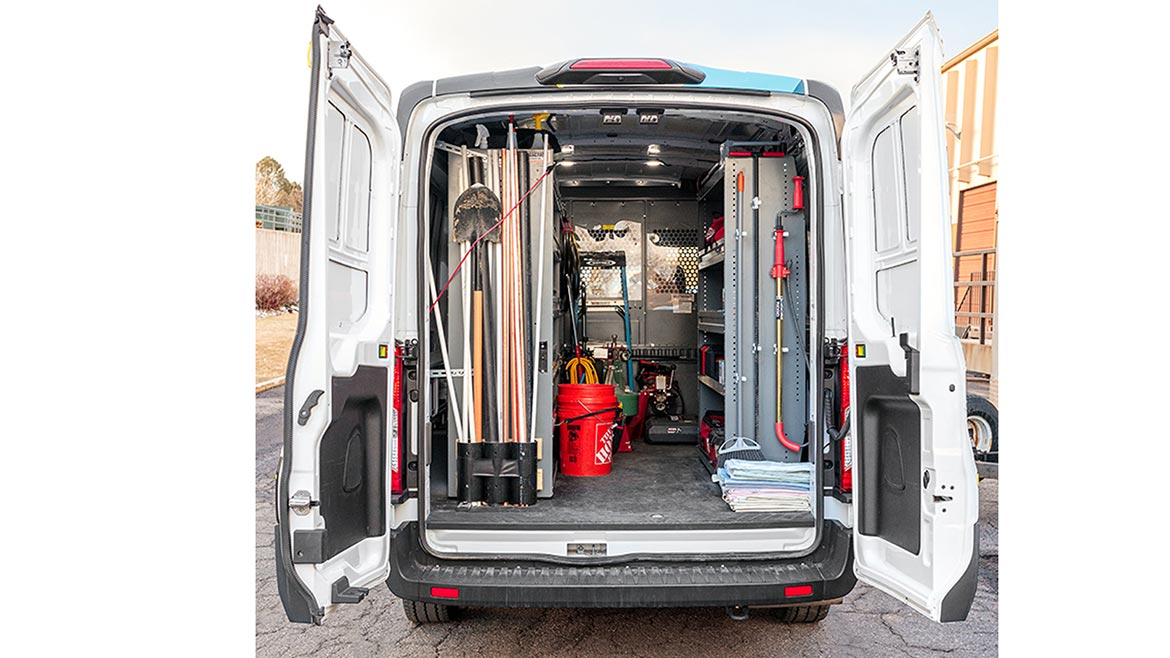 In addition to offering residential plumbing services, High 5 Plumbing emphasizes the need to give back to the community through its High 5 Cares program, where the company donates and volunteers for one local nonprofit every month.

“We are much more than just a plumbing company,” Cassi Torres says. “While many other companies possess similar abilities when it comes to plumbing work, we also emphasize the importance of giving back to the community. We understand that our company would be nothing without the community. That is why we created our High 5 Cares program. With this program, we sponsor a nonprofit each month that receives $500. In addition, the nonprofit also receives $10 for every High 5 Club Membership that’s sold during the month and receives 100% of the proceeds from the company’s High 5 clothing line. We also highlight the nonprofit on our social media platforms as well. This program allows us to give back to a community that has supported us over the last decade.”

Truck of the Month: The brand with the mystery man

Truck of the Month: Living the dream

Truck of the Month: A dream realized