This website requires certain cookies to work and uses other cookies to help you have the best experience. By visiting this website, certain cookies have already been set, which you may delete and block. By closing this message or continuing to use our site, you agree to the use of cookies. Visit our updated privacy and cookie policy to learn more.
Home » John Siegenthaler: Freedom of (fuel) choice
Radiant & HydronicsColumnistsRadiant & Hydronics ColumnsJohn Siegenthaler: Hydronics Workshop
Hydronics Workshop

I recently provided guidance on a unique residential retrofit project. The house, a modest 2,500 square-foot, two-story, was located in a semi-rural area near Albany, New York. It had been purchased by a young family about two years ago.

The previous owner had contracted with a local propane supplier to install a 500-gallon underground propane storage tank. The tank remained the property of the propane supplier, and was “leased” to the homeowner for $10 per year. Hardly a cost to be concerned over. However, the contract the previous homeowner had agreed to ensured only that supplier could add propane to the tank. As part of the pile of paperwork involved in purchasing the house, and perhaps unaware of the “fine print,” the new owners had agreed to extend that contract.

The propane was used to operate a mid-efficiency furnace for space heating, and a relatively old (pilot equipped) domestic water heater. It also supplied the kitchen stove and a fireplace. The latter was used very little.

Figure 1 shows the price of propane the new owners were paying over the last quarter of 2020, and the first half of 2021. 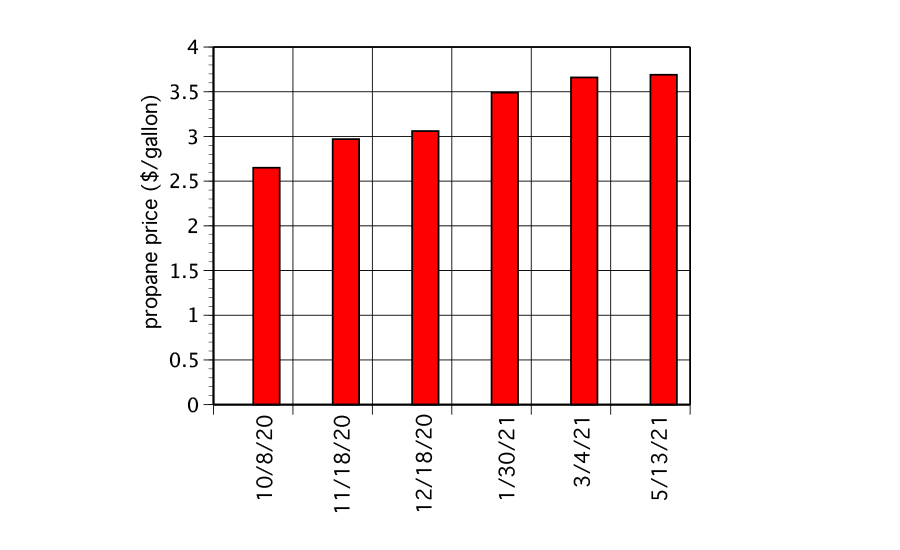 At an assumed seasonal efficiency of 89%, propane priced at $3.69/gallon equates to $45.19 per million Btu (MMBtu) delivered from the furnace. The home’s relatively old standing pilot domestic water heater probably had net efficiency in the range of 65% to 75%. At an assumed 70% efficiency, the heat for domestic water was costing about $57.46 per MMBtu. The bottom line was the young family was spending close to $4,000 per year for propane.

By comparison, the local cost of electricity during this time averaged about $0.125/KWh. If this electricity was converted directly to heat — such as through electric baseboard — it would cost about $36.63 per MMBtu delivered, significantly less than the unit price associated with the latest propane delivery.

From an energy cost standpoint this situation “begged” for a heat pump.

The owner had looked into the cost of installing a new air-to-air heat pump from a major manufacturer. It could provide space heating and cooling, but had no provision for domestic water heating.

Even though the house had an existing — and nicely-installed — forced air distribution system, I recommended an air-to-water heat pump. The propane furnace would be replaced with a new “low-temperature” air handler sized to dissipate the full heating output of the heat pump at a water supply temperature of about 105° F. This allowed the heat pump to operate with COPs comparable to those achievable from a low-temperature hydronic delivery system such as floor heating. This heat pump configuration also allows chilled water cooling through the same air handler.

The choice of air-to-water rather than air-to-air also allowed nearly 100% of the home’s domestic water heating load to be supplied by the heat pump. For the family of four, using an estimated 60 gallons of domestic hot water daily, this alone would save about $280 per year compared to electric resistance water heating, assuming that the heat pump operated with a seasonal average COP of 2.5. If the old propane water heater remained in operation, it would cost about $328 more per year (based on the recent delivered price for propane and an assumed 70% thermal efficiency) compared to heating the domestic water using the heat pump.

The air-to-water heat pump also allowed the system to be configured so that panel radiators (or other hydronic heat emitters) could be easily added to the system in the future. This was made possible by adding a manifold station to the system to accommodate up to five homerun distribution circuits. Imagine adding a towel warmer to the master bathroom, or a couple of panel radiators to keep the recreation room in the basement comfortably warm during long upstate New York winters. Both are very “sellable” upgrades that simply aren’t possible using ductless mini splits or central air-to-air heat pumps.

Although there are several air-to-water heat pumps that could have been used in this situation, we had an opportunity to try a newly released Enertech “Advantage” system. It consists of a monobloc outdoor unit paired to an indoor pumping and control module. Figure 2 shows the outdoor portion of the system. 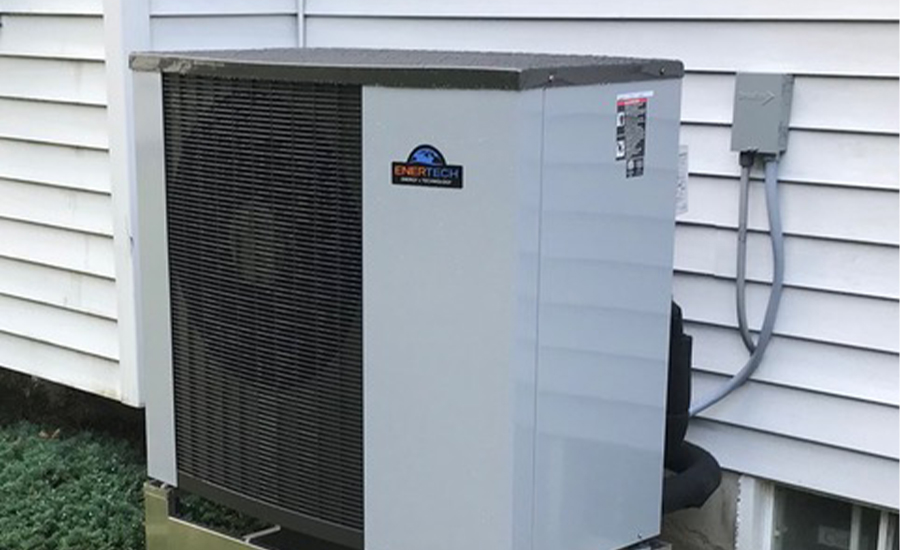 Figure 3 shows the indoor unit, along with the new B&D air handler and Turbomax water heater. 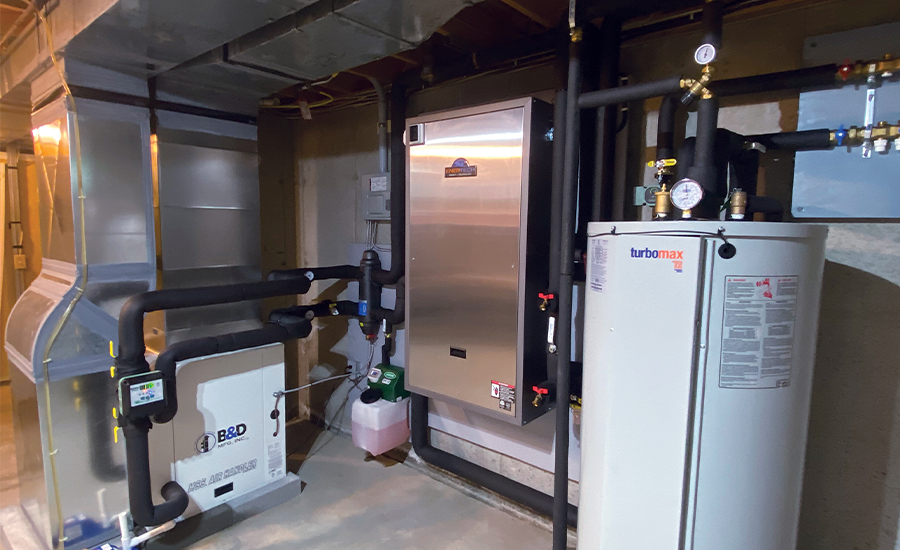 Enertech took a “systems approach” in developing this product. The objective was to pre-engineer and pre-assemble many of the components needed to provide coordinated space heating, cooling and domestic water heating. This reduces the chances of incorrect system piping or wiring. It also reduces the installation time relative to assembling a system of equivalent capabilities on site. 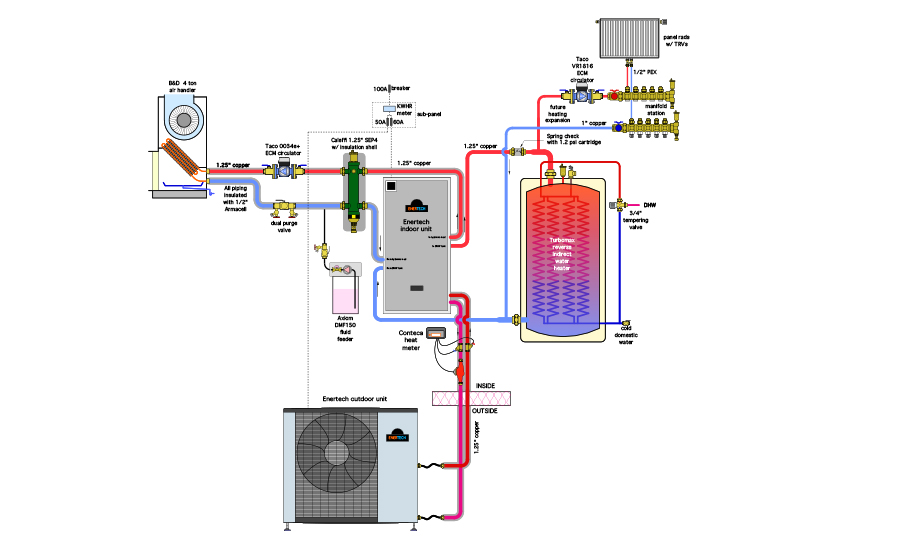 The system operates with a 30% solution of propylene glycol antifreeze. This protects the outdoor unit and adjacent piping in the event of a prolonged power outage during sub-freezing weather. An Axiom fluid feeder holds a small reserve of this fluid, and can automatically inject this fluid, when necessary, to maintain a system pressure in the range of 15 to 20 psi.

The hydraulic separator isolates a small variable-speed circulator within the indoor unit from the circulator (or multiple circulators) used in the hydronic distribution system. In this application, we used a Taco 0034e+ circulator, operating at a constant speed, to provide a 14-gpm flow rate through the coil of the air handler in both heating and cooling mode.

The controls within the indoor unit were set to prioritize domestic water heating over either space heating or cooling. A sensor within the reverse indirect tank communicates with the indoor module to determine when the tank needs heating. Motorized valves within the indoor unit then direct flow between the outdoor unit and the shell of the reverse indirect water heater to maintain its internal temperature near the setpoint, which can range up to 130°, even during cold weather. These controls also provide a “transition” mode between cooling and domestic water heating. This prevents hot fluid from passing through the air handler coil when cooling resumes following a period of domestic water heating. It also prevents chilled fluid from being injected into the indirect water heater at the start of a DHW cycle when the system has been operating in cooling. These are nice details that, while possible using dedicated field-installed controllers, would add cost, complexity and the possibility of improperly coordinated operation.

The indoor unit in this system was equipped with an internal 9 KW electric resistance heater. This heater operates in three stages, providing up to 30,700 Btu/h of supplemental heat input if needed for either space heating or domestic water heating. The indoor unit can also be configured without the electric heating elements, but with control logic to operate an existing or new supplemental boiler.

Although not required, we equipped the system with a Btu meter to determine the heating and cooling energy supplied from the outdoor unit. We also added a web-based monitoring system to record the total electrical energy supplied to the heat pump, air handler and circulator. By combining data from these instruments, it’s possible to determine the coefficient of performance of the heat pump over any time interval.

The indoor unit has the ability for wireless communication with the home’s router. In combination with an APP, the homeowner can monitor system operation and change some operating temperatures. With the appropriate permissions, the installer as well as the manufacturer can also monitor the system at a more detailed level. Service needs can be automatically reported by the system.

So much for all the technology in this system. One of the most compelling reasons for initiating this installation was reducing the family’s annual energy cost by an estimated $2,400 by eliminating the major propane loads (e.g., space heating and domestic water heating).

The link between good hardware selections and the professional installation shown in figures 1 and 2 is a meticulous mechanical contractor. This project was fortunate to have Terry Moag and Ben Melick, both from The Radiant Store in Troy, New York, as that link. Their passion for quality workmanship and interest in creating a state-of-the-art system was deeply appreciated.

At some point, the homeowner may add a grid-connect solar photovoltaic system to the house. It would be a perfect complement to the new heat pump.

There was some consideration to removing the underground propane storage tank and potentially purchasing a smaller above-ground tank to supply the kitchen stove and fireplace. However, the estimated cost of removal, which by contract must be covered by the homeowner, was about $2,700. For now, the tank remains, but be assured the homeowners will not be seeing the propane delivery truck in their driveway very often.