The major trend in the commercial boiler market, which will continue in 2021 and beyond, is the predominance of packaged boilers installed in multiple boiler cascade systems.

When these boilers are purchased, the heat exchanger, blower, burners and combustion system arrive at the jobsite preassembled and factory tested for proper operation. The contractor installs the near-boiler piping, the vent system, the electrical connections and configures the controls for proper multiple boiler operation.

All the boiler setup is done with internal controls so third-party outside control panels are not required. Most of these boilers are cascade-ready to connect to each other if you have anywhere from two to eight boilers in a boiler room.

The built-in cascade control system often times runs with a primary variable pump through one or more boilers and allows them to run at their minimum firing rate to enhance the overall efficiency of the boiler system. The preferred control scheme is parallel cascading instead of serial cascading. In serial cascading, the first boiler is fired up to 80% capacity, then the load is split to 40% each by bringing on boiler number two, then the two boilers are fired up to 80% capacity before firing boiler number three, and so on. But that’s not as energy efficient. With parallel cascading, the first boiler is fired to 30% to 40% before the second and third boilers are fired. The lower the firing rate, the higher the efficiency. The flue gases are kept in the boiler longer and more energy is extracted from them. A high turndown ratio and parallel cascading go hand in hand. 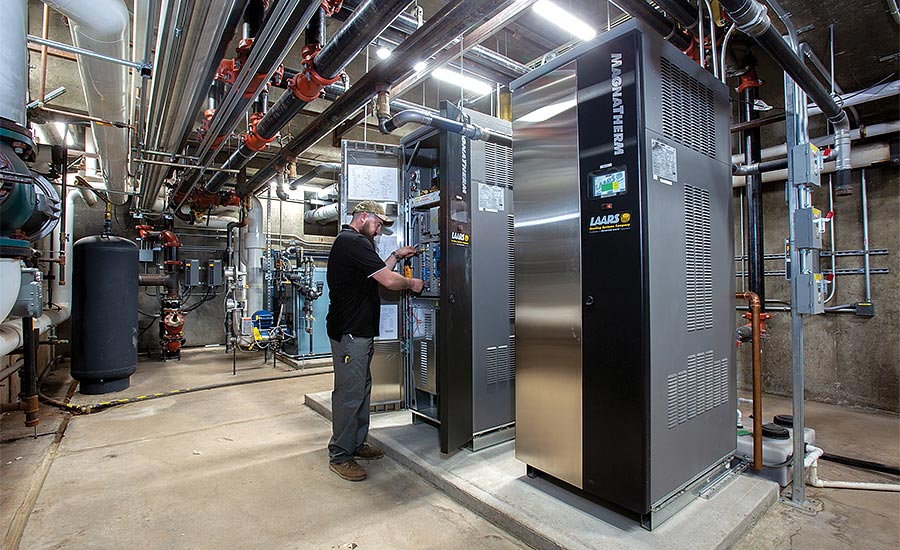 The goal in designing a high-efficiency multiple boiler cascade installation is to reduce the temperature of the return water as low as possible. Higher turndown ratios and parallel cascading are the keys to efficiency.

The goal in designing a high-efficiency boiler installation is to reduce the temperature of the return water as low as possible. To do so, engineers and mechanical contractors can employ a couple of techniques. If the boilers are serving both high temperature and low temperature zones in a system, such as a radiant floor that runs on low temperature supply water, the strategy is to not blend the return water from the low-temperature side in with the high-temperature return. The low temperature return should be piped directly to the boiler return. Or the specifier can oversize the radiation, such as using an oversized coil in the air handlers and designing them to deliver 120° F to 160° F water with a larger ∆T so the flow rate goes down. As the flow rate decreases, it takes less pump energy to push water around the system.

Outdoor reset is common for boiler plants to keep both the supply and return temperatures as low as possible. The boilers will condense as long as the return water temperature is below 135°. The boiler plant can supply 120° water on a mild day with a return water temperature of 90° to 100°. As it gets colder, the supply water temperature may increase up to 170° with a 40° ∆T, and that will achieve an 87% to 88% thermal efficiency. If the engineer can design the system to drive the temperature requirement down in one zone and, for example, get below 130° return in the system, it will condense. I’ve seen a large radiant slab floor in a Canadian storage facility with the boilers running at 120° supply temperature and an 80° return, and the condensate drain was pouring water, a sure sign of high-efficiency operation. Similar results were seen in a central bus station terminal with radiant floors, as well as in a seven-boiler snow- melt system in a ski lodge with snow melt for streets and sidewalks in a shopping area. 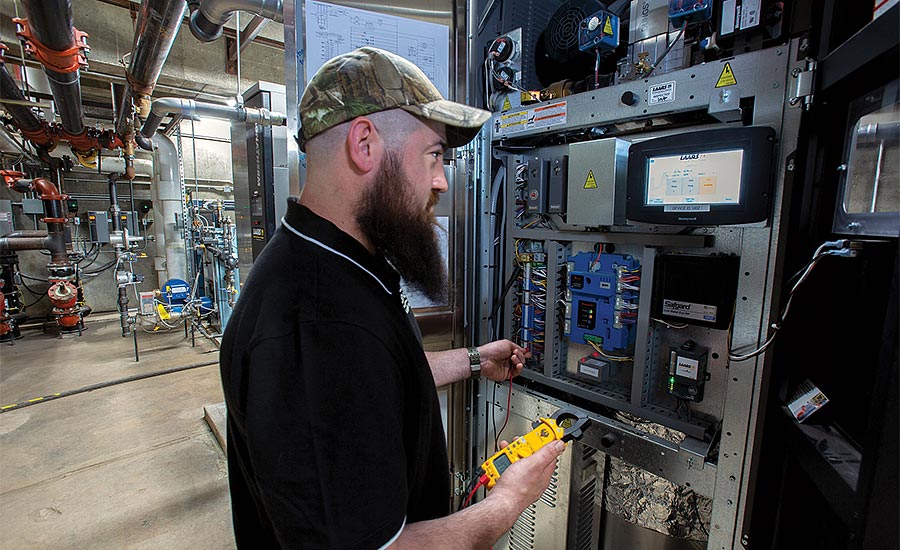 More recently, boiler manufacturers (including Laars Heating Systems) have increased the use of O2 sensors, which provide a feedback signal to the control system that senses the level of oxygen in the combustion chamber. The purpose of the O2 sensor is to limit excess oxygen within the combustion process in order to enhance the overall efficiency of the boiler so the boiler plant runs at peak efficiency regardless of the weather conditions. It also serves as an early warning for flue gas recirculation where, for example, the exhaust is not properly installed and some exhaust gases are pulled into the combustion air intake, or where combustion air is drawn from an area that might contain contaminants in the air intake, such as from a lint-filled commercial laundry exhaust that’s too close to the boiler intake.

A combustion control system using O2 trim control will fine-tune adjustments and can send a diagnostic signal so maintenance personnel can see there’s something going on that probably needs a service call. It enhances the reliability of the boiler plant. These plants have built-in redundancy so if one boiler shuts down, the rest of the plant continues to operate.

The high turndown ratios achievable with current boiler models, as high as 20:1, as well as control systems designed for parallel cascading, keep a boiler plant operating in the low-temperature sweet spot for condensing operation, and the use of variable-speed system pumps enhance the total installed efficiency savings via reduced pump energy consumption. Mechanical contractors can assemble boiler plants like this that offer long-term energy savings and reliability for their customers.

Using technology to boost the power of parallel pumping

High Efficiency Pumps: What makes a pump 'smart' and why are smart pumps so effective?