The unintended consequences of water treatment.

History of disinfection of water

Until the middle of the 19th century, we did not realize severe infectious diseases could be spread through drinking water. In 1854, Dr. John Snow used his scientific judgement to conclude a cholera outbreak might have spread through the local water supply, and he used chlorine in an attempt to disinfect the Broad Street Pump water supply in London.

From this first attempt, the concept of disinfection of water slowly evolved around the world. Regular use of chlorine to disinfect was first practiced in Hamburg, Germany, in 1893, and in Jersey City and Chicago in 1908.

The figure below shows how the incidence and death rates of typhoid fever, which was rampant in all countries but started declining steadily before completely disappearing by 1960. In addition, all waterborne infectious diseases went down drastically during this period. It is because of these successes that we can celebrate this as one of the greatest public health achievements of the 20th century. 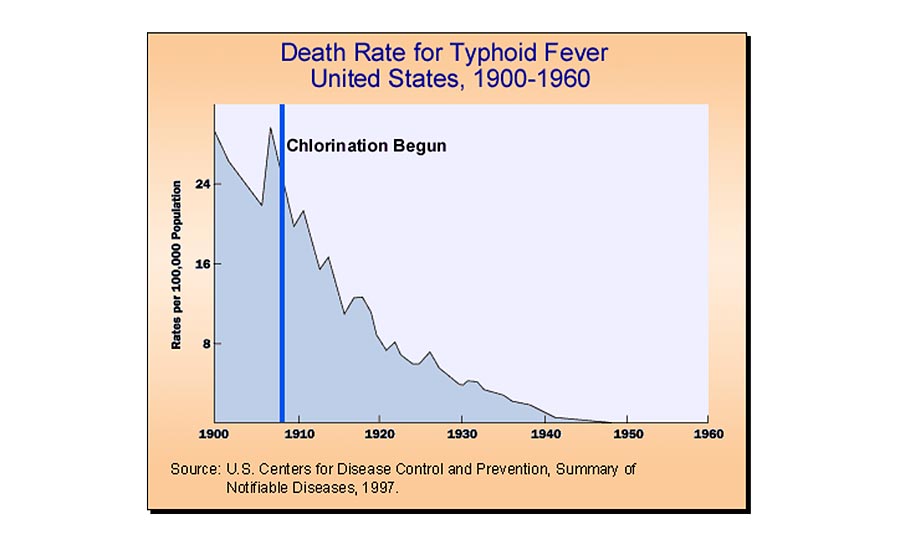 Sterilization of water, i.e. killing all living organisms, is not the goal of water treatment; instead, a multi-barrier approach is used to achieve the desired objectives. The goal of disinfection as a final step in this process is the elimination of the disease-causing microorganisms (pathogens) responsible for waterborne diseases. Even though there are many other disinfectants such as ozone, chlorine dioxide and UV used around the world, chlorination is the most widely used method for disinfecting water supplies in the United States.

All waters contain complex organic compounds that are formed from decomposing plant, animal and microbial material in soil and water. Total organic carbon (TOC) is often measured as an indicator of the total amount of these natural organic matter in waters. The presence of disinfection byproducts (DBPs) formed by the reaction of chlorine with such organic compounds in the water were identified, and possible health effects of DBPs were investigated beginning in 1970. Such investigations have shown that these DBPs are linked to:

However, these risks are often shown to be associated with some uncertainties. The U.S. Environmental Protection Agency has considered all of these studies showing such risks and uncertainties and established regulations to limit occurrence of DBPs in drinking water for a group of four total trihalomethanes (TTHMs), a group of five haloacetic acids (HAA5), and the individual byproducts chlorite and bromate. The maximum contaminant levels (MCL) for these DBPs are currently: TTHMs (0.080 mg/L), HAA5 (0.060 mg/L), chlorite (1.0 mg/L), bromate (0.010 mg/L). (Chlorates and bromates are of concern only when chlorine dioxide and ozone are used, respectively).

TTHMs and HAAs typically occur at higher concentrations than other known and unidentified disinfectant byproducts. The presence of TTHMs and HAA5 is representative of the occurrence of many other chlorinated DBPs; thus, a reduction in TTHMs and HAA5 generally considered indicative of a reduction of all types of DBPs.

These EPA regulations require water utilities to control levels of regulated DBPs in drinking water, and these water utilities assess if they need to make changes to comply with such updated EPA regulations. A subset of these utilities has decided to change their secondary disinfectant from chlorine to monochloramine. These water systems use chlorine to fully disinfect the water but add chloramine to the distributed waters. Monochloramine would thus produce lower concentrations of regulated DBPs because it is less reactive than chlorine with natural organic matter over a long time of contact in water in the pipes. However, water treated with monochloramine may contain different unregulated DBPs than chlorinated water. The EPA and other organizations continue to research unregulated disinfection byproducts.

Only the 11 chemicals of concern are regulated by EPA, but about 700 DBPs have been identified. Over the years, research studies have shown that at least a few DBPs are more toxic even when they occur at lower concentrations than these regulated ones in drinking water. These are families of chemicals called haloketones and haloaldehydes that can lead to concerns. Specifically, bromo and iodo compounds which can be formed when bromides and iodides are present in the source water.

All of these unresolved questions are creating new concerns in the scientific community. The EPA, upon its regularly required six-year review, has concluded it would evaluate any newly available data, information and technologies to determine if any regulatory revisions are needed to the DBP regulations currently in place.

Disinfection of water is an essential and required step to prevent waterborne microbiological diseases, but the production of DBPs as an unintended consequence is of significant concern to the health of the consuming population. Upcoming review and decisions by EPA can lead to better regulations and improved quality of drinking water in the United States.

P. “Regu” Regunathan, Ph.D., has been part of the water treatment industry for more than 52 years. He has served as vice president of R&D and operations, and later as president of Everpure, a subsidiary of Culligan International. He then was appointed as senior vice president of science and technology of Culligan Water Technologies, and later U.S. Filter Consumer Group. He currently owns a company providing consulting services to businesses and organizations, including Water Quality Association.

Water Wisdom: Are you prepared for TDS Creep?

EPA to revise the Reduction of Lead in Drinking Water Act