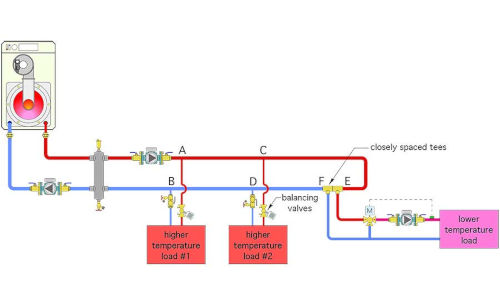 Although the closely-spaced tees at points E and F in Figure 1 will provide hydraulic separation between circulators (P2) and (P3), the overall piping arrangement is going to create some undesirable conditions.

The piping on the right side of the hydraulic separator is neither a “2-pipe” system, nor a primary/secondary system. Trying to morph these two piping topologies together is not a good idea.

The maximum differential pressure available to drive flow through the higher temperature load No. 1 will be the pressure differential developed between points A and B due to the head loss around the “loop” serving the closely-spaced tees.

If the piping path around the “loop” is short, there won’t be much differential pressure. Furthermore, these pressure differentials will also change depending on which of the two high temperature loads is active. It’s not a stable situation.

A more stable situation can be created by eliminating the “loop” portion of the piping, and creating a “crossover” for the lower temperature load, as shown in Figure 2. 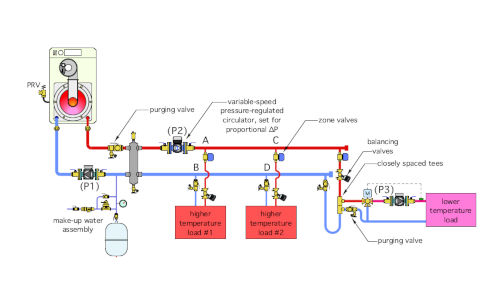 The overall piping topology is now a “2-pipe” header system. All three loads connect across the headers.  This is no more “primary loop.” All three load branches have a balancing valve to properly proportion flow rate between them.

Circulator (P2) has been converted to a variable-speed pressure-regulated circulator operating in proportional differential pressure mode. This mode will keep the differential pressure across each branch relatively stable regardless of which branches are operating. It will also significantly reduce the pumping energy required by the system.

The closely-spaced tees in the crossover for the low temperature load provide hydraulic separation between circulators (P2) and (P3).

Other glitches that have been corrected:

Download The Glitch and Fix: February 2020 in pdf form.