Failure of one part of a hydronic radiant system can cause the entire row to fall.

As a designer/installer of any hydronic radiant system (especially one that incorporates hydro-air, old preexisting standing cast iron radiators and an indirect water heater), you have dozens of steps involved that are not unlike setting up a winding row of dominoes. Failure of one or more can cause the entire row to fall, and with that goes the customer’s faith and trust in you. The advanced training I received from the RPA (Radiant Panel Association, now Radiant Professionals Alliance), has been instrumental in conducting forensic analysis of hydronic and electric radiant systems that failed to meet the promise of extremely comfortable, reliable and healthy heating/cooling systems. This case, however, threw me a curve ball!

The owner complained about the following things: 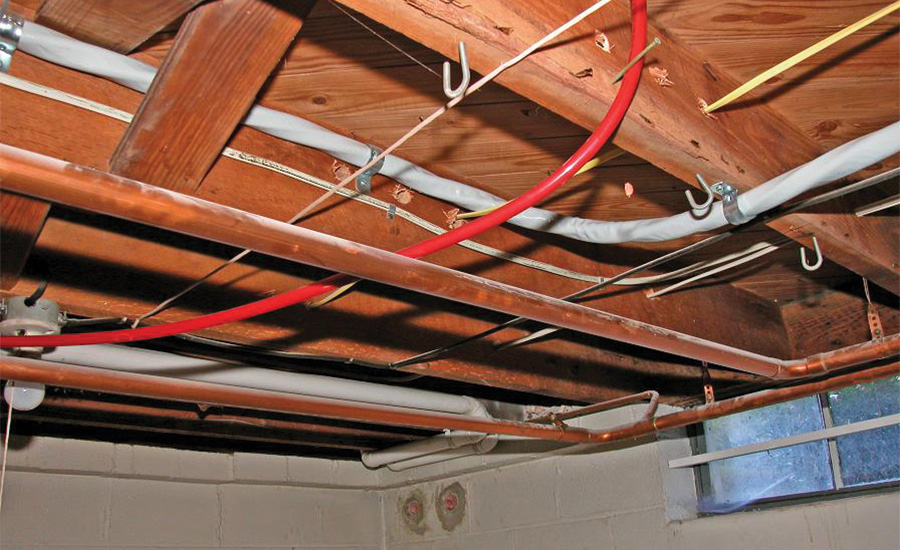 Rubbing against the floor joist and nail will eventually create a leak after rubbing through the PEX.

My observations were as follows: 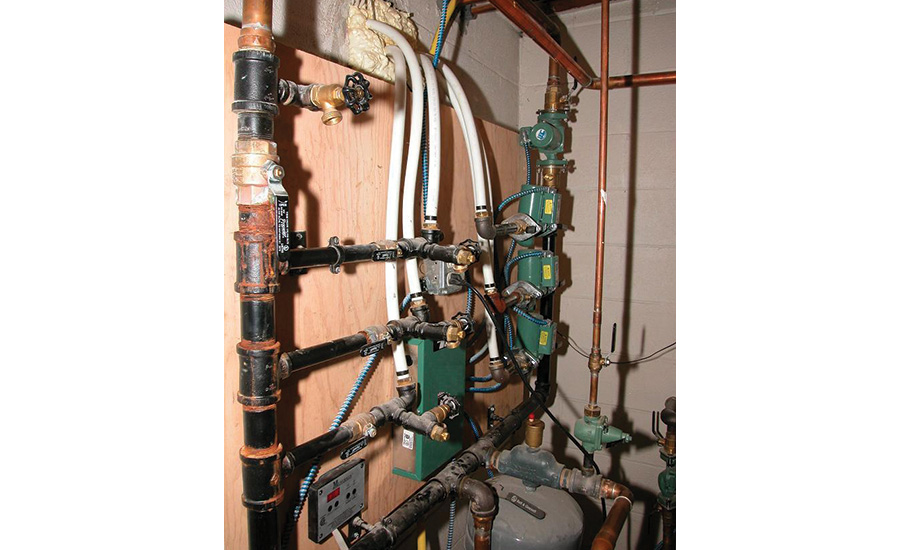 The top circulator's electrical enclosure is also incorrect because it is facing the wall and cannot be readily accessed. Simply fix by removing the four screws and turning the motor 180 degrees so that the electrical access cover can be easily removed to gain access to the wiring.

In the basement mechanical area, the first thing that caught my attention were the three Taco 007 circulators standing on their heads and a number of active leaks in the near boiler piping. Taco does not recommend installing its circulators in this position unless the system fluid pressure can be maintained at a minimum of 20 psi — at the circulator. While all four circulators will be operating at pressures well below 20 psi, the three head-standing circulators will have the potential to experience any, or all, of the following conditions: 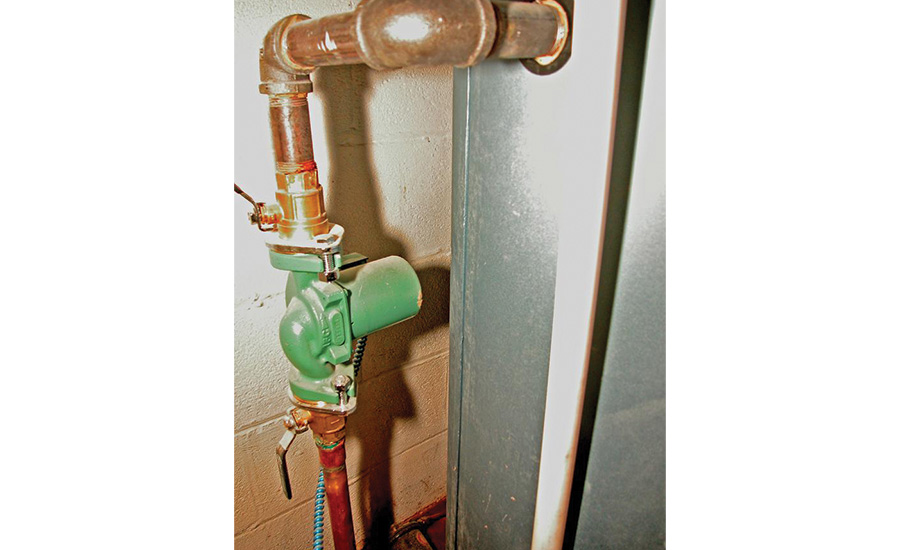 Without utilizing the outdoor reset control, the modcon was programmed for a maximum temperature setpoint of 175°/195° F. If enough Btu can be shed while pumping water through that zone’s heat emitters, the boiler would be able to modulate its firing-rate and remain on — much like cruise control. During the course of running the modcon while data-logging its performance, the upper limit delivery temperature remained at 181.7° while the burner modulated its speed to match the heat-output. No noise was heard other than an initial expansion ticking at the concrete block wall’s sleeve.

Having found no zone or solenoid valves in any of the exposed piping or any other obvious source for generating noises, it was necessary to look for something out of the ordinary. Water has great capacity to store and transport heat energy. However, there are limits beyond which water cannot accept any more heat energy without undergoing a phase change from liquid to vapor. In a sealed vessel, superheating water above its normal 212° F boiling point can occur. A violent phase change will occur if the pressure suddenly drops or additional heat energy is added that exceeds the saturation temperature. 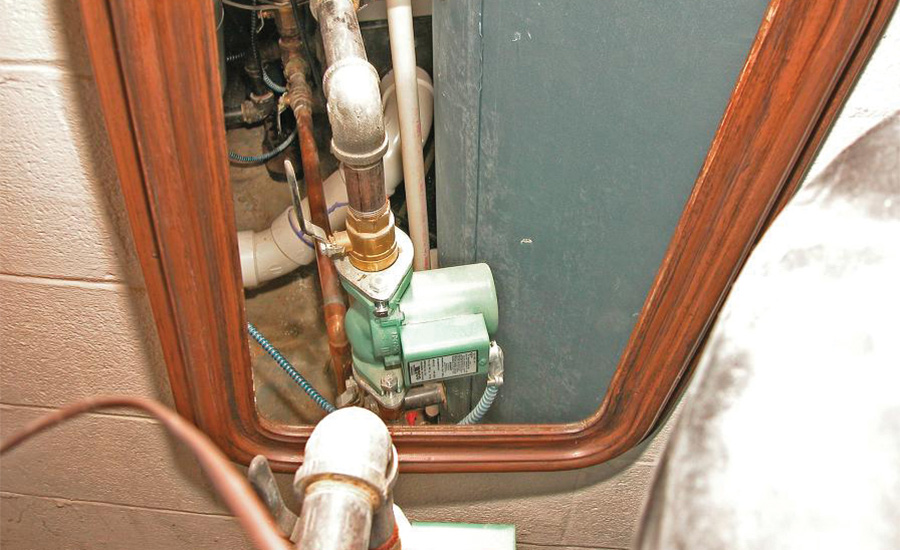 Remove the screws and reorient motor and electrical for proper access.

Saturation temperatures vary and are dependent upon system pressure. The higher the pressure, the higher the corresponding temperature before water will reach its saturation temperature and go through a sudden phase change. The heat energy required for raising water to, or above, its saturation temperature can be induced mechanically or derived from a fuel source. The circulators in this system are commonly referred to as “wet rotor” as their shaft is hollow, which allows the system fluid (water) to fill the chamber surrounding the stator in order to cool and lubricate the circulator. There is a considerable amount of mechanical heat energy given off by the induction-style motor and absorbed by the surrounding water. There is a potential for saturation temperatures to build within the head-standing pump canisters. Colder weather leads to longer run-times for the circulators and will create additional heat to be generated within the rotor can. If the saturation temperature is exceeded, a sudden change of state from liquid to vapor will occur. The steam-vapor created would surge into the passing stream of hydronic fluid and immediately find itself surrounded by cooler water, where it would collapse inward and create a noise as described. This reaction would, in turn, cause a portion of water to be drawn back into the chamber where the reaction could build and reoccur.

The engineers at Taco agreed this was a real possibility and the circulators were replaced and installed on the horizontal, which resolved the mysterious middle-of-the-night shotgun blasts. Due to hydro-air being involved, limited outdoor reset was added to reduce fuel usage. The PVC exhaust line was given proper support and fall to eliminate bellies while the combustion air was relocated and installed per guidelines. The correct circulators were installed for the modcon and indirect water heater. The piping was replaced and made leakfree. The heating zones were balanced to eliminate cold spots and mini-splits were recommended to supplement the existing AC system. A wye strainer was also added to catch system debris and an acid neutralizer cartridge added to protect the cast-iron drain lines.

Dominoes were reset and remained vertical.

Dave Yates began his career in the PHCP-PVF trades in 1972 with F. W. Behler, a third-generation plumbing/ HVAC firm he purchased in 1985. Besides running F.W. Behler, writing articles for industry trade publications and speaking at events, Yates also is an experienced teacher in the hydronics industry, serving as an adjunct professor and on the Technical Advisory Board for the Thaddeus Stevens College of Technology. He can be reached at dyates@fwbehler.com.

Dave Yates: The doctor is in

Dave Yates: Oh, my aching back!