In 1884, John Willison Danforth founded a residential and commercial heating company in Buffalo, New York. During the First World War, his company served as the general contractor to the U.S. Navy Bureau of Yards and Docks, and during WWII, the company contributed to the war effort by constructing aircraft-manufacturing plants.

Since then, the John W. Danforth Co. has continued to grow into new areas and fields; currently, it has facilities in the Buffalo, Rochester, Albany and Syracuse, New York, areas and provides a wide variety of services related to commercial and industrial plumbing, HVACR, testing and balancing, installation, and maintenance. 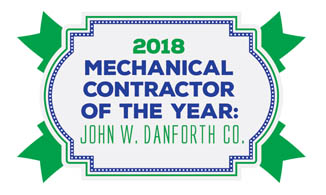 Founded in 1884 in Buffalo, New York, the John W. Danforth Co. is Plumbing & Mechanical’s 2018 Mechanical Contractor of the Year.

The company’s commitment to performing only the highest-quality work, as well as its commitment to its employees and community, have earned John W. Danforth Co. the title of PM’s 2018 Mechanical Contractor of the Year.

Perhaps the biggest contributor to Danforth’s continued success is the company’s ongoing commitment to its employees. The company uses its vision, mission, and core values to guide the company’s growth and empower its team members.

“We are an ESOP,” Danforth President Robert Beck says. “We’re all owners. We all take pride in our work, and pride in Danforth, and really the true power of Danforth is in our people.”

But ESOP has another meaning at Danforth — it represents the company’s core values of Employees, Safety, Ownership, and Profitability.

“The vision and mission are something that we really push hard, from the top down. Attitude is a reflection of leadership, and we really promote that at all levels — all the way down to the apprentice on the job site — of really continuing to deliver those industry-leading experiences every day.”

The company’s vision, in a nutshell, is to build meaningful relationships while providing industry-leading experiences for its customers.

“From our union labor partners that are so, so much a part of Danforth and have been so much a part of Danforth for the 134 years being signatory with the UA Plumbers and Pipefitters, followed by the SMART Sheet Metal workers, these are key components to our success in our culture,” Beck says. “As well as the MCAA — we are a charter member. There’s only a few of us left in the MCAA that were charter members.

“That’s our vision — to continue building those meaningful relationships, both internally with each other and externally with our customers and business partners, and to continue that journey.”

In keeping with its relationship-centric culture, Danforth works closely with its local unions, including Sheet Metal Workers Local 71, which supplies Danforth with apprentices.

“We take on 15 to 20 interns every summer. We try to stagger those interns from sophomore to seniors, and it gives the person a chance to get to know Danforth and our industry,” Beck says. “It’s become a really a strong feeder program to our entry-level positions. We have really had great success in turning those interns that we end up hiring into our leadership going from mid-level to upper level to now, we’re getting close to having those guys become our senior level managers in leadership.”

Paul Crist, Local 71 business representative and secretary of the apprenticeship committee, says Danforth has been an invaluable partner to the union.

“It is not uncommon for me to speak with someone from Danforth on a weekly basis on different issues,” Crist says. “We work closely with our SMACNA Contractors Association and Danforth, and Danforth is active on all our committees and has trustees participating in all our trust funds, including the apprenticeship, pension and health funds.”

Crist describes Local 71’s relationship with Danforth as “strong” and says they both “respect and appreciate” each other.

“We are in this industry together,” Crist says. “Danforth is a great company — great for our members, great for our community. They are always involved in several charitable causes in our area, they really treat their employees as a family, and they always go above and beyond what’s required.”

Whereas most 130-plus-year-old companies are likely to have had many different CEOs over the years, Danforth is different. The company has only had six CEOs — from just three different families — in its history. Danforth’s consistently strong leadership has played a large role in creating and maintaining both the company culture as well as the company’s reputation for being an elite contractor with an impeccable safety record.

“The Reilly family has been such a huge part of the last 40 years of Danforth,” Beck says. “Wayne Reilly was the president and CEO, and now Kevin ‘Duke’ Reilly is CEO. They’ve all participated and helped create that culture of building relationships, partnering with our industry partners and the union trades, and really setting the foundation for folks like me and the next generation of leaders to build upon.

[Danforth] is always willing to work with other trades and be a team player, and from an owner’s perspective, that’s really key for us.

Preston McDaniel, who worked closely with Danforth as senior director of construction at Global Foundries, says he is consistently impressed by how the company invests in its employees and clients.

“They’re really willing to learn and apply that learning in their business, and the biggest thing that Robert [Beck] is doing is investing in it,” McDaniel says. “It’s pretty hard to sit down with a contractor and convince them to spend millions of dollars investing in these resources, but Robert has been willing to step up and make those investments, and I think it shows in what they’re able to deliver to the customer, and that’s what matters to me.”

McDaniel also points to the impressive culture of safety Danforth has created over the years as another reason they stand out from the crowd.

“You can typically tell quickly if a contractor is committed to providing a safe culture for their employees, and you can tell Danforth has a culture of safety,” he says. “They make sure everybody goes home safe every single day. They provide the proper PPE [personal protective equipment] and resources, and they don’t cut corners to save a buck.

“They’ve been a big part of the safety culture for Global Foundries, and they’re really changing the culture here in the capital region [of New York] for construction safety. Robert provides that leadership. It resonate through their whole company, and that’s really important for our industry.”

Danforth is also willing to learn and invest in technologies that benefit not just the company but everyone involved in the project, from other subcontractors to the general contractor to the building owners themselves.

“We were doing some integrated project delivery and they were one of the trade partners selected for a couple of the projects,” McDaniel says. “They were selected as the primary mechanical contractor to complete a couple of mechanical projects. What stood out on that project was their tenacious drive for innovation and their use of 3-D technology to drive prefabrication offsite. They were willing to invest in the technology and the resources to put that technology to work.

“The company is always willing to work with other trades and be a team player, and from an owner’s perspective, that’s really key for us — having a group of trade partners that cooperate and enable each other to be successful.”

The John W. Danforth Co. attributes much of its success to its people and the relationships they have built over the years within the industry. But it is also a core part of Danforth’s mission to give back as much as they can to the communities in which their employees live, work and play.

In addition to its involvement in the Boys & Girls Club, the Buffalo Sabres Foundation, and the Make-A-Wish Foundation, Danforth also supports Kevin Guest House, which provides housing for families of patients receiving medical treatment in the Buffalo area.

“In Albany, in our office, they started a Danforth C.A.R.E. program that provides support to local K-12 schools and students,” Beck says. “They’ve taken it upon themselves to start driving and participating in giving back to the community, which I think is just fantastic.”

Danforth employees have also collected toys for children in need during the holidays, and CEO Kevin “Duke” Reilly himself has even played Santa Claus.

John Samar, executive vice president of Western New York Operations for Danforth, has been with the company for 21 years and says philanthropy has always been a part of the company culture.

“We’ve been a part of Hospice Care with the Leukemia and Lymphoma Society, and I’ve personally been on boards for two decades here with Danforth,” Samar says. “It is a key part of what we do. We try to do what we can. There’s always someone who needs help. The need is never-ending.”

The company aims to be good stewards of the areas in which its employees live and work.

“We have to mentor, lead and use our resources to try to help wherever we can, whether in fundraising or in training and connecting youths with unions and potential careers,” Samar says. “There are 5,000 kids that are part of the area Boys & Girls Club, and if we can make a difference in a dozen to two dozen of them, whether they get into an apprentice program or we can assist them with a scholarship to go to college, that’s just really meaningful and that’s where we need to be.”

What’s next for Danforth

“We’re really not chasing revenue,” he says. “We’d rather chase good customers and good profits. We pick and choose how and where to grow, whether that’s in our current geographic jurisdiction, and we just bolster and improve the services and the capacity to our current markets, or we venture into new markets where it follows our key strategies of where we can provide value to the marketplace and become a contractor of choice over time.”

Jen Anesi-Brombach was a Chief Editor of Plumbing & Mechanical.