John Siegenthaler: How to stage a renewable heat source with an auxiliary boiler

The control concept is simple: Draw heat from the renewable heat source, its associated thermal storage tank or both whenever it can supply the heating load, and when it can’t, supply the load from the auxiliary boiler. The renewable heat source becomes the “lead” stage for heat injection to the distribution system while the auxiliary boiler becomes the “lag” stage. A piping schematic that could be used for this concept is shown in Figure 1. 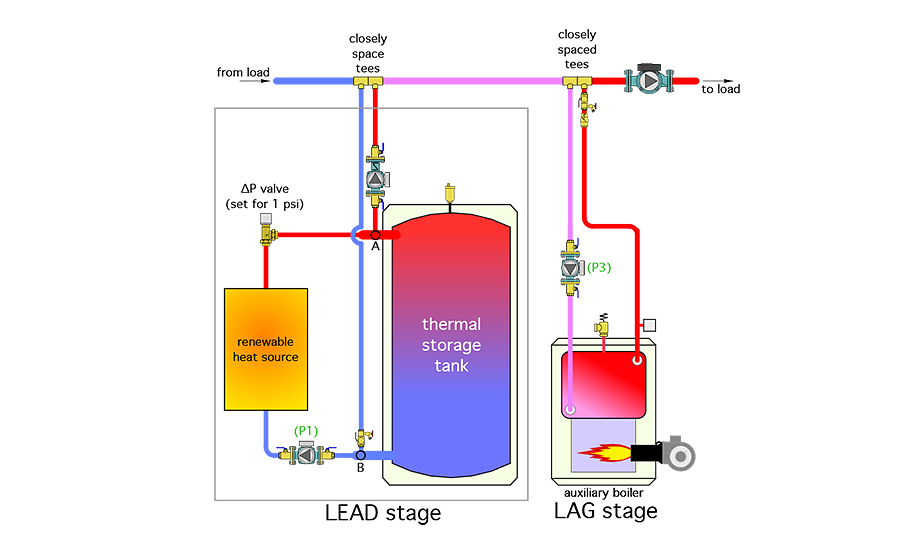 A set of closely spaced tees provides hydraulic separation between circulator (P2) and the load circulator. Circulators (P1) and (P2) are hydraulically separated by the very low pressure drop in the common piping between points A and B in Figure 1.

The auxiliary boiler is also coupled to the distribution system by a set of closely spaced tees located downstream of the other set. This placement is important because it allows the lead stage to contribute heat to the distribution system at a lower water temperature compared to what would be possible if the connecting order of the heat sources were reversed — for example, if the auxiliary boiler tees were placed upstream of the lead-stage tees.

The piping in Figure 1, while hydraulically capable of providing several useful functions, cannot do so without intelligent controls.

The first control function to be added determines when the auxiliary boiler needs to operate — assuming insufficient heat input from the lead stage. This is easily done using an inexpensive outdoor reset controller, as shown in Figure 2. 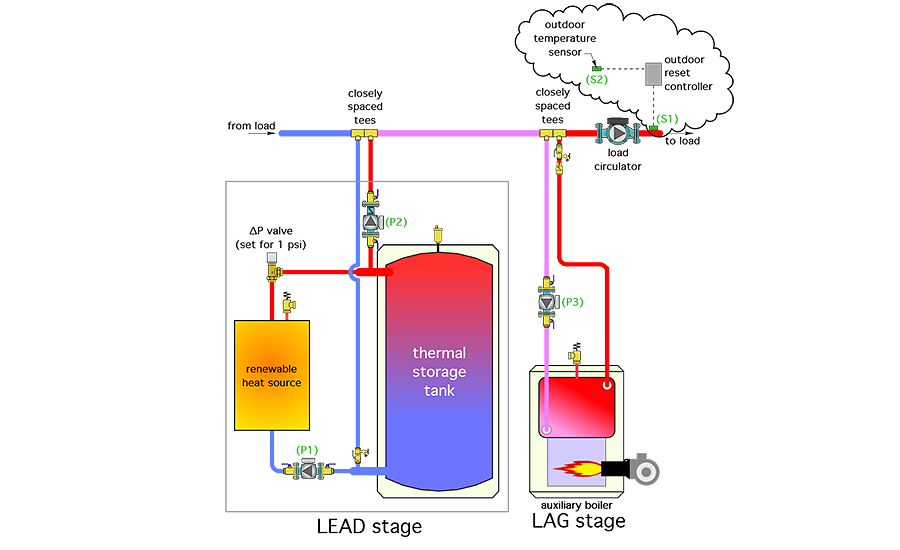 Assuming the load continues to demand heat, the auxiliary boiler and circulator (P3) remain on until the measured supply after temperature at sensor (S1) is slightly above the target temperature. This control action ensures adequate supply water to maintain comfort, but also doesn’t needlessly “overheat” the water supplied to the load. It also allows the auxiliary boiler to serve as the sole heat source if the lead stage (e.g. the renewable heat source, storage, circulator [P2], etc.) is down for service.

Another option is to install a thermostatic three-way anti-condensation valve on the auxiliary boiler to maintain the boiler’s inlet temperature high enough to prevent flue gas condensation, regardless how low the supply water temperature to the distribution system is controlled. Figure 3 shows how such a valve would be installed. 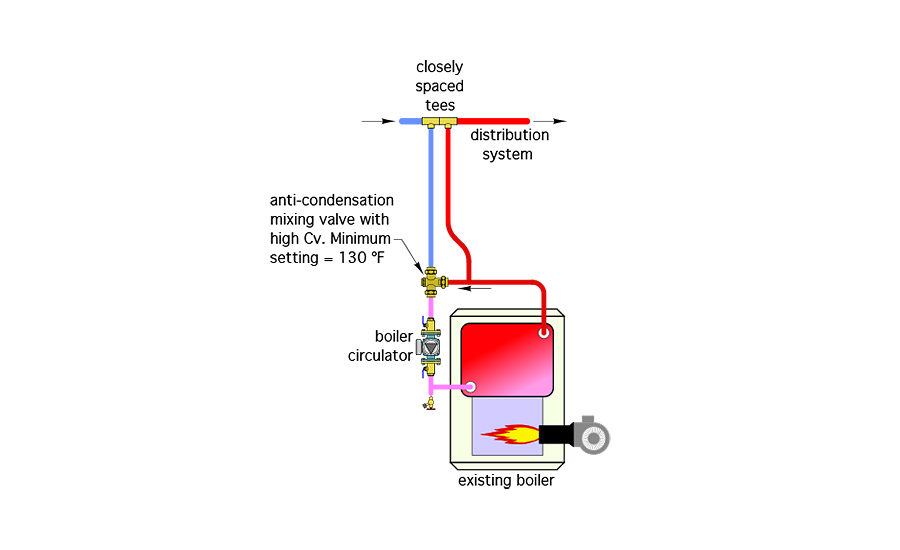 This is not desirable from a thermodynamic standpoint. It converts high-grade energy (fuel) into a low-grade energy (heat) before that energy is needed by the load. Energy in fuel can be stored for years without degradation. But the moment that energy is converted to heat, it’s a race against time — and heat transfer — to store it in hopes of eventually sending it to the load when needed. 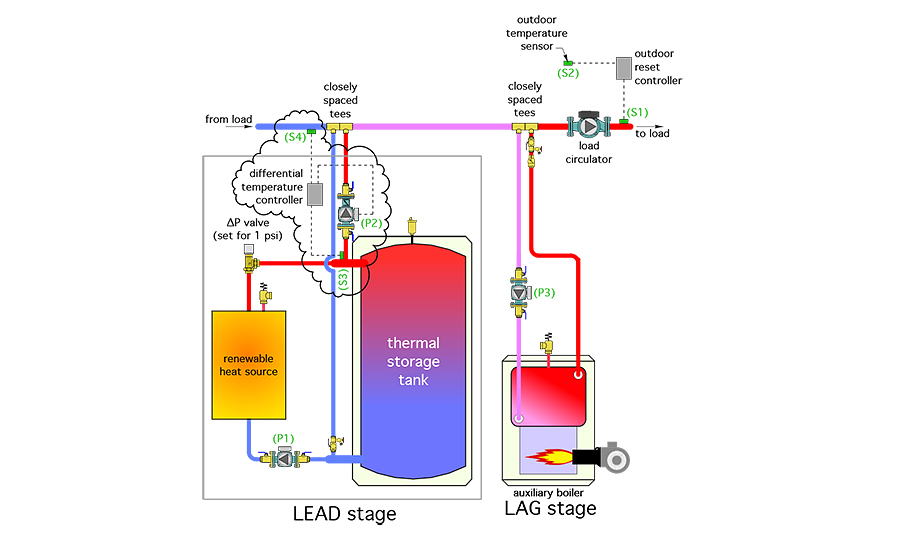 When there’s a call for heat from the load and the upper tank header is a few degrees warmer than the return side of the distribution system, circulator (P2) is allowed to operate. However, when this temperature difference decreases to a small value where the accuracy of the DTC cannot ensure that positive energy flow is occurring, circulator (P2) is turned off.

A suggested control criteria based on sensors (S3) and (S4) in Figure 4 would be: 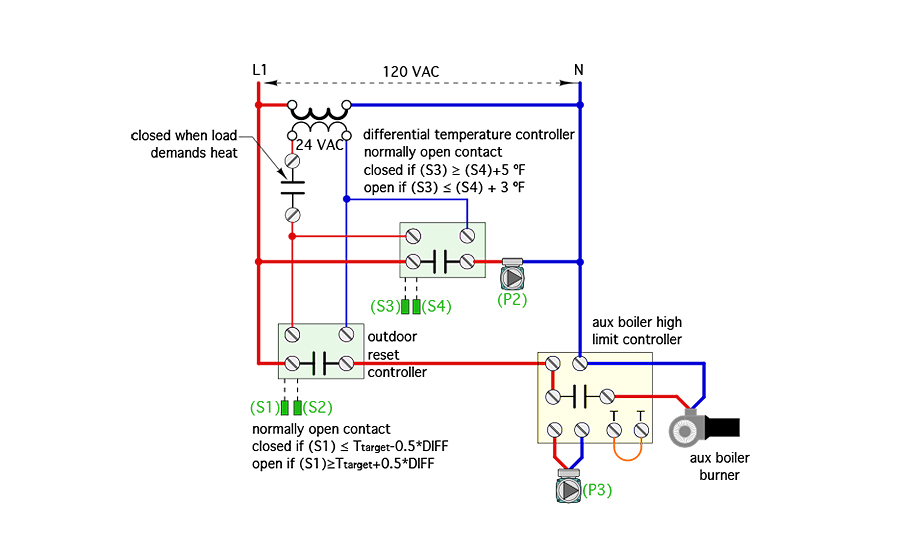 This combination of simple relatively low-cost controllers allows accurate staging of a renewable heat source with an auxiliary boiler. It ensures that comfort will be maintained regardless of the status of the renewable heat source while also allowing the latter to make a positive energy contribution to the load whenever possible. Perhaps you can find a way to integrate this piping and associated control logic into a future project.

This article was originally titled “Making a positive contribution” in the July 2018 print edition of Plumbing & Mechanical.

To read this article in pdf form, please see here.