The Glitch: Drawings have consequences

The schematic below was drawn based on my best “interpretation” of a marginally detailed CAD drawing from an engineer. The system shows two low mass conventional boilers with redundant circulators serving a 5 zone distribution system. Each boiler has a 3-way motorized mixing valve for anti-condensation control. Can you spot few details that are incorrect? What, if anything, would you recommend be changed on this drawing. 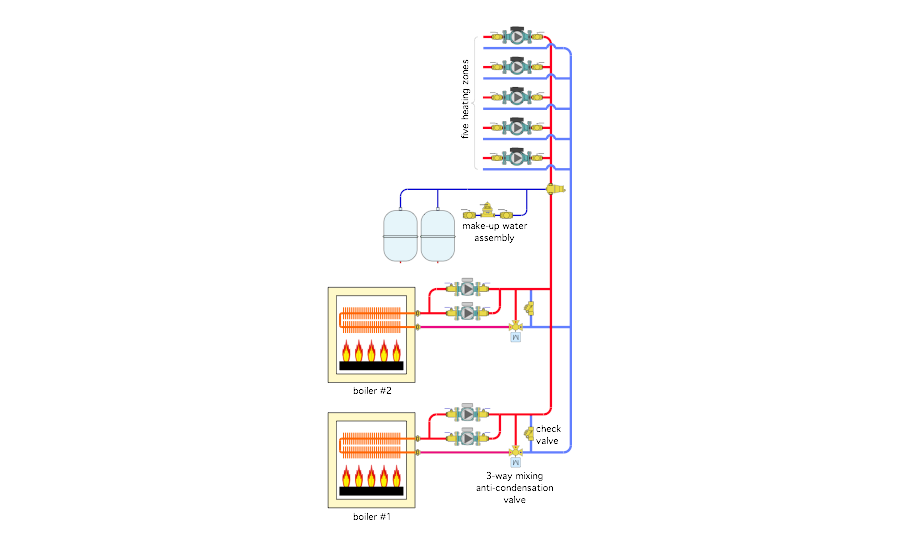 Drawings and specifications produced by engineers are typically part of the legal contract documents for a project. Errors or omissions can quickly lead to finger pointing and litigation. Project drawings along with specification are complex documents that need to cover thousands of details. It’s easy to make “minor” errors (I know because I’ve had PM readers spot some drawing errors that I made in past columns, and bring them to my attention).

It’s also reasonable to think that those installing the system would catch “minor” errors and do the right thing. Hopefully that occurs, but if it doesn’t the drawings and specifications will be carefully scrutinized by attorneys or their “hired guns” looking for any minutia that points to errors, code infractions, or omissions. To minimize this possibility it’s important to have project drawings and specifications reviewed by at least one other competent person before they are released.

In the original drawing there are several issues that are either errors or omissions:

There are several possible ways in which this system could be modified. One possibility is shown below. 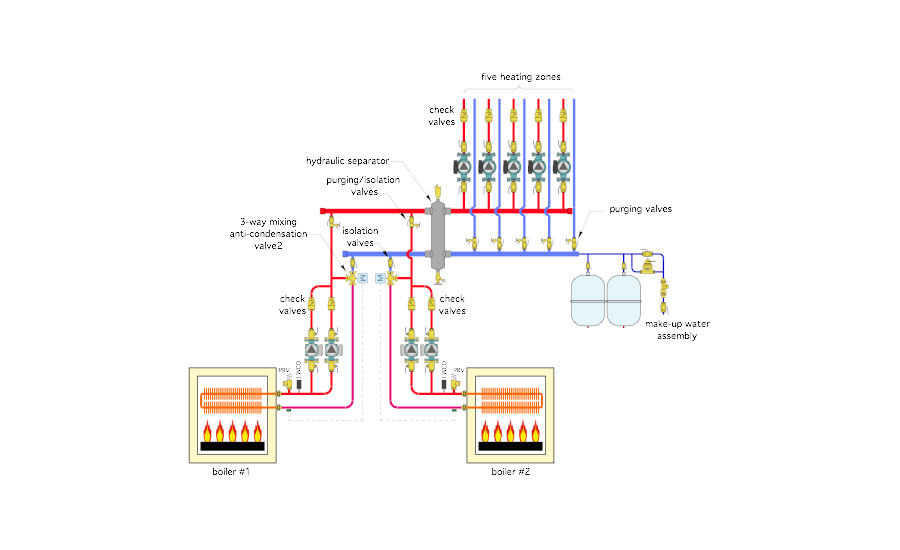 A low water cutoff, pressure relief valve have been added to each boiler. Each boiler circulator also has an associated check valve to prevent flow reversal the the inactive circulator when the other circulator is on. A 3-way motorized mixing valve is used to provide anti-condensation protection for each boiler. Isolation and purging valves have been installed on each boiler piping assembly to allow efficient bulk air removal and isolation of each boiler if necessary.

The boilers connect to short and generously sized headers that lead to a hydraulic separator. The latter isolates the pressure dynamics of the boiler circulators from those of the zone circulators. It also provide air separation and dirt separation.

Each zone circuit is now equipped with a check valve and purging valve.

The make-up water system includes a backflow preventer and fast fill bypass valve. It connects to the end of another short generously sized header that collects the return flow from the zones and routes it back to the hydraulic separator.

The Glitch and Fix: Lose the loop