AAVs in the UPC?

Proponents of air admittance valves want them added to the UPC code, but they face resistance from those who remain unconvinced.

A recent survey among readers of PM Engineer magazine revealed that 74 percent would consider the use of AAVs for venting systems, while 52 percent said they would use AAVs anywhere the code would allow. Currently, AAVs that comply to American Society of Sanitary Engineering (ASSE) 1050, 1051 and NSF Standard 14 are approved in the International Plumbing codes (IPC/IRC). But the Uniform Plumbing Code (UPC) only allows them under Section 301.2, Alternate Materials and Methods--and only when approved by the authority having jurisdiction. 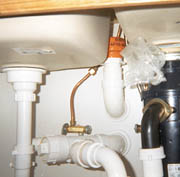 A typicall AAV installation in an island sink

Currently ASSE 1051 and NSF Standard 14 are American National Standards Institute (ANSI) standards. ASSE 1050 is currently under review for ANSI accreditation. Since an ANSI standard for AAV usage already exists, the UPC stands in conflict with other ANSI standards as long as AAVs are prohibited. This is one argument AAV proponents are using in their call for AAVs to be admitted fully into the UPC.

Jack Beuschel, president of AAV distributor Studor, Inc., a subsidiary of IPS Corporation, stands on the front line in this battle. "Studor has proposed code changes for the 2003 UPC for air admittance valves that comply to ASSE 1050 and 1051, as well as NSF Standard 14," he said. "The International Association of Plumbing and Mechanical Officials (IAPMO) Technical Committee (TC) denied our proposed code changes. So we appealed to the IAPMO Standards Council and the National Fire Protection Agency (NFPA) Standards Council, and the appeals were denied."

Beuschel also pointed out that the gravity-type AAVs--the type that comply to the ASSE performance standard 1051--are already approved for use in the NFPA Standard 501 for manufactured housing. "This is an important issue because IAPMO and NFPA intend to have the 2003 UPC accredited by ANSI. ASSE 1051, NSF 14 and NFPA 501 are all ANSI-accredited standards. Therefore, there would be a conflict with the UPC if ANSI accredits the code without including the standards for AAVs."

Tom Beckey, P.E. and vice president of engineering for Oatey (another AAV manufacturer), said the IAPMO technical committee and standards board should keep an open mind when it comes to introducing new products to the codes. "Every time you try to do something new there is some resistance to it," Beckey said. "IAPMO posted a challenge to the AAV crowd, stating their criteria for AAVs. We've been trying to address those concerns, so it's going back and forth. Up in Canada they are trying out AAVs on a limited scale for a set trial period, and I think that's a good approach. Any model code that's worth its salt would have some mechanism for trying out new products and ideas. How do you get new products into the UPC system if you don't allow trial periods or methods to find answers? There has to be a process established for getting new products into the system, and arbitrarily setting up barriers is not acceptable."

Richard Wagner, a P.E. with the Emcor Group, is nationally known for his code comparison work and his service on the National Standard Plumbing Code. Wagner said there is a lot of resistance to AAVs, but he sees the IAPMO Technical Committee becoming more open-minded. "I think AAVs have a place. We're talking about giving more options to the contractor; more ways to get the same job done. The committee is approving a lot more things than they used to. They're taking a more practical viewpoint of things."

The stack vent that would normally extend through the roof now penetrates the interior wall where an AAV will be installed.

Resistance to AAVs may be overstated, Wagner said. "They talk about failures and there were some failures due to material problems, and [manufacturers] will admit that. But a lot of the problems are overstated by people who just don't want them. It seems like every time there's an issue like this someone turns up and says 'We had a system and it failed terribly,' and they never have any positive proof of that; it's just a lot of hear-say."

So what's behind the resistance to AAVs? Arnie Rodio of Pace Setter Plumbing Corp. in Lancaster, Calif., sits on the IAPMO Technical Committee. Rodio explained his view of the opposition toward AAVs: "The main objection I have--and one that is basically voiced by most of the members of IAPMO--is that the system of vents you have right now [open pipe venting] is basically foolproof. There are no mechanical parts, there are open pipes to the atmosphere, and there is no problem with this system. With an AAV you're introducing a mechanical device; all mechanical devices fail at some point. There are buildings in L.A., Oakland, San Francisco that are plumbed the conventional way, over 100 year old, and they still don't have a problem. With AAVs, if there are backups they can foul them up; if the valves don't seal properly or they get worn or whatever--they can allow sewer gases into the wall cavities, the attic, wherever they're installed."

Rodio said using AAV venting systems is an unnecessary change to a system that already works just fine. "It's introducing a mechanical component into a system that has no problems," he said. "It's not a benefit to the system, the consumer or anybody. The only benefit to it is that you can eliminate quite a bit of vent piping. But the benefit to the consumer is not the concept of having less vent piping; the theory is that this makes it cheaper for a house to be built. What ends up happening is that you have a consumer with a waste-and-vent system that is more prone to failure, and is not as reliable as what is allowed now under the code. The open pipe venting system has at least a hundred years of a proven track record."

However, Beuschel pointed out that the gravity-type AAV is actually not a mechanical device. "The gravity-type AAV is not a mechanical device because it is not operated by a mechanism; it opens by negative pressure and it closes by gravity," he said. "These are not mechanical forces, they are natural forces. The fact that a product has a moving part does not make it 'mechanical.' Some people are mistakenly likening gravity-type AAVs to the old spring-loaded devices that open by negative pressure but close by a spring. The spring eventually rusts out and deteriorates, and the valve will not work properly. There is plenty of documentation available on the gravity-type method of AAV operation and it has been proven in the field that they are not only equivalent but offer many benefits versus open pipe venting."

Many UPC jurisdictions currently allow AAVs as an alternate material and method, including Arizona, Colorado, King County in Washington, as well as numerous jurisdictions in California, and "the valves are performing successfully," according to Beuschel. "Every manufactured product currently permitted in the UPC, including open pipe venting systems, eventually will fail. That's why you've got repair plumbers. Unless failures can be proven to be detrimental to the health and safety of the public, they should not be a criteria for approving a product. The fact that a product could fail is not a technical reason to judge whether a product should be in the code or not."

Beckey doesn't believe in a perfect venting system. "To say that open pipe venting systems are perfect is not true," he said. "There are always instances where the roof vents get clogged up."

The Value of AAVs

With all the resistance toward AAVs, contractors might be wondering what the product can do for them. Why should they consider using AAVs at all

Beuschel sees them as the natural evolution of venting systems. "The big advantage of AAVs to the contractor is simple," he said. "Innovative products that save labor and materials enable the contractor to complete more jobs in the same amount of time. When you increase efficiency, you keep costs down, and at the same time increase profits."

Beckey agrees. "AAVs eliminate a substantial amount of work on the venting system when you're installing a new house or doing a retrofit. They're reliable products that work well. It's a sustainable product in the fact that you're using less materials, and it increases the energy efficiency of your house because you don't have vent-stack penetration and heat loss."

As for AAV reliablity, a representative for one manufacturer said returns are very low: four units returned for every one million sold.

Looking for a Solution

At the last IAPMO Technical Committee meeting on April 28 in Reno, Studor requested a Tentative Interim Amendment (TIA) in accordance with the IAPMO consensus development process. The TIA would have permitted AAV installation in UPC jurisdictions until the publication of the 2006 Uniform Plumbing Code. This would have enabled jurisdictions that adopt the UPC to evaluate AAVs and reach a comfort level with the product without ammending the code. After the request at the meeting, it was sent out for public comment. The IAPMO Standards Council denied the TIA and Studor will file an appeal with the NFPA Standards Council.

"During the whole code development process the Technical Committee has not been able to come up with any technical reasons why this product should not be included in the code," Beuschel said. "That's why we requested the TIA."

But Rodio raised another important objection. "If AAVs are allowed into the codes, the other system [open pipe venting] will go away," he said. "Contractors will be forced to use AAVs. I'm not going to be able to go to a builder and say 'I know XYZ Plumbing's bid is three or four hundred dollars less than mine, but they're using air admittance valves and I'm not.' The builder doesn't care about that; the cheaper method is going to take prevalence. If AAVs are used, within two to three years every building going up will have them, and anybody doing construction will have to use them.

A master of compromise, Wagner has his own idea how to solve the AAV conflict. "My thought was to take this venting issue and put it in an appendix," he said. "If the UPC is ever going to be accepted on the East Coast, they've got to have the ability to do things the way they're used to doing it there. So it's a good idea to get an appendix that's more coordinated and easier to work with, and that would cover all the different venting methods, their restrictions and usage. That way if a jurisdiction doesn't want to adopt an appendix, they don't have to."

To learn more about IAPMO and its code development process, visit www.iapmo.org.