This winter may not have been as frigid as in previous years, but that doesn’t mean people weren’t cranking up the heat. Of course, it’s only when something goes wrong that people think twice about their heating systems.

But, for those who don’t have a safety net budgeted in, it can be quite difficult to come up with the money when things go wrong.

That is where Oil Heat Cares comes in. The not-for-profit foundation assists needy persons and organizations with the replacement of their oil heating appliances with help from oil companies, contractors or individuals who make monetary donations to OHC. Additionally, OESP chapters are major supporters of Oil Heat Cares and often volunteer their time to help with various projects.

“This year, OHC is off to a great start,” says Dave Bessette, OESP national past president and director of Oil Heat Cares. “We have more completed projects now than we did at the same time last year, and we [predict OHC will] complete 25 projects in 2017.

“Most of our projects come from OESP Chapter members,” he adds. “We would like to see Oil Heat Cares become better known in the industry and see more oil companies help their customers who are in need of heating equipment and cannot afford it for one reason or another.”

Every year, OESP hosts the Oil Heat Cares Ride fundraiser to raise money; the 2016 Ride took place in September 2016 during the Association’s Oil Heat Retreat in Cape May, N.J., and raised more than $8,000.

In 2017, the fundraiser will be held at the Eastern Energy Expo Convention and Trade Show on Monday, May 22, in Hershey, Pa. The event has motorcycle riders, bicyclists, runners and walkers all on different courses. Each participate secure pledges for their concerted effort in the event.

Griffith Energy and OESP completed an Oil Heat Cares installation in Thurmont, Md., for Sharon Cercone, who contacted the company when she started experiencing problems with her heating. Mike Hodge, regional service manager at Griffith and president of the Mid Atlantic Chapter, led the project. Hodge has been in the industry for 45 years, starting out as a tech moving into in management in 1983.

“We found her existing boiler had a crack in it and needed to be put out of service,” he says. “The only thing we could do there was replace the boiler.”

Hodge recommended a four-section Solaia boiler with a Riello burner. The boiler was purchased from Columbia Boiler. Hodge reached out to OHC, and they agreed to pay for the new boiler; Griffith Energy supplied the free labor to install it.

The techs who worked on the install were Dale May, field supervisor, and Tony Cassidy, service/installer. Hodge stopped by to introduce himself and said that Cercone was grateful for the generosity of OESP.

“She was overwhelmed and surprised someone would install this new boiler for her in her time of need,” Hodge says. “She actually hugged me and would not let go; she was very emotional.”

I’d like to express our many thanks and heartfelt gratitude for our new furnace. You’ll never know how much you’ve changed our lives. It has made all the difference in the world to us. 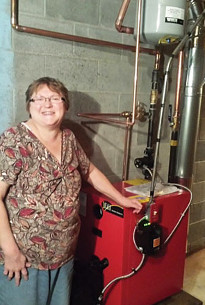 Credit: Homeowner Sharon Cercone is grateful for her new boiler and burner. In her letter, she thanks everyone involved. Photo courtesy of: Griffith Energy

There’s no way we could afford a new furnace with all of our other financial obligations. As I mentioned, my husband has been fighting a battle with Crohn’s disease since 2010 but after Humira injections we feel he’s in remission.

All of you at Griffith Oil are awesome. I’d like to mention Karen Duttera who I talk with often on the phone. She’s always so helpful and kind.

Also I’d like to mention the men who installed our new furnace; they were so nice and professional. Their work was top notch! They cleaned up after they were finished, explained how the new furnace and thermostat worked and also took away the old furnace. They did excellent work. Their names are Dale May and Tony Cassidy. You can be proud of these employees.

Bob Daros, co-owner of Heritage Fuel & Propane in Croton Falls, N.Y., and treasurer to WPH&CP, started in the industry as an oil driver in 1988. In 1992, he and his brother, Ted Daros, started Heritage Fuel when they were 22 and 21 years old, respectively, with a loan from their father and a gift from their grandmother.

In February 2017, he proposed a project to Oil Heat Cares in order to give back to someone who has been involved with the Croton Falls community most of her life.

“We discovered the leaking boiler doing an annual servicing,” Bob Daros says. “The boiler — which was 29 years old — developed a leak between the one and two sections and was leaking into the combustion chamber.”

Oil Heat Cares donated funds for the new boiler, and at a monthly meeting of WPH&CP, it was mentioned that small parts were going to be needed to complete the job. Components were donated by the following: Buddy Brant of Consolidated Supply, Bryan Gettler of Intercounty Supply, Tim Warnecki of Marplat, Jim Mahoney of Eastern Oil, Justin Romano of Guaranteed Home Improvement, and Bob and Ted Daros of Heritage Fuel.

Initially, the homeowner, Patricia Hitchcock — an 83-year-old who was born and raised in the house — had been made aware of the need for a new boiler by a Heritage Fuel serviceman. Being widowed for 28 years and on a fixed income, she was very concerned about how she was going to be able to afford a new boiler. She was a charter member of the North Salem Ambulance Corps and was an active member for more than 30 years. She was also the school nurse for many years and a private caregiver to many people in the area.

After discussing the situation, the Daros brothers came to the conclusion that they should apply for OHC consideration.

Currently a chapter representative on the OESP National Board of Directors, Jim Finan, past president and current member of OESP Garden State Chapter, has been involved with the Garden State Chapter of OESP for at least 30 years. He began as an associate member and then was elected to the executive board as an associate vice president; he was eventually elected president, holding various positions on the board after that.

Finan is a territory sales representative for Venco Sales of Huntington, N.Y., which he joined in July of 2008 after 28 years in the plumbing, heating and cooling wholesale distribution side of the business. The previous 15 years before joining Venco Sales he served as VP of the Hydronics Division of Ridgewood Corporation.

Finan became involved with this project after receiving a phone call from a local heating contractor, who was contacted by Herman and Carol Granitzski to look at their above-ground 275-gal. fuel oil tank.

“I met the contractor at the residence to inspect and assess a possible leak on the bottom of the 12-year-old tank,” Finan says. “After close inspection, it was determined that there was indeed a small leak. In my time at the job site, I had several conversations with the homeowners Herman and Carol — a sweet elderly couple on a limited budget.

“They were upset that they might not be able to afford a new tank and the installation costs. I also met with their son Dave, who happens to be a New Jersey State Trooper, and discussed the possibility of moving forward on the project through the Oil Heat Cares Program. I then brought the situation to our Garden State Chapter and then to [OESP national past president and director of Oil Heat Cares] Dave Bessette. We all agreed to move forward with the project.”

As per usual, volunteers to help with the project were quick to respond from the Garden State Chapter and beyond. Brian Cullity, vice president of sales and marketing for Granby Industries, was first to respond and gracious enough to donate a Granby 2-in-1 Double Wall Tank through their local wholesale distributor — John Provenzano, HVAC division manager at Aaron & Company of New Brunswick, N.J. — who was more than happy to deliver it to the job site.

“A big thank you to Rob Van Varick and his team, and Jim Froehlich of All American Oil Recovery, for a job well done,” Finan says. “They donated their time and manpower to complete the mission.”

The project involved removal and remediation of a 12-year-old, above-ground, 275-gal. steel single-wall oil tank; installation of the new above-ground oil tank with all necessary fittings and gauges; running of new oil lines, filters, etc.; and a rain shield for the new outside tank.

The only expense incurred by the Garden State Chapter was $101 for local permits.

The Granitzskis, along with their son Dave, couldn’t be happier with their new tank.

“We just don’t know what we would have done if not for OESP and the Oil Heat Cares Program,” Herman Granitzski says. “Everyone involved was fantastic, we can’t thank them enough.”

“That is what Oil Heat Cares is all about,” Finan says. “Bringing all the resources that the Oil and Energy Service Professionals have at their disposal — our membership, affiliated manufacturers and reps, and local wholesale distributors — in an effort to lend assistance to those people that are in dire straits and in need of our expertise.”

Bessette expresses his pride in the association as a whole and its generosity of spirit.

“Oil Heat Cares will continue to assist its customers and non-customers alike in their times of need,” he says. “It is my hope that other industries will look to our example and follow suit.”

Contractors can either submit a request for funds through the OHC web site, www.oilheatcares.com, or call Dave Bessette at 781-326-9500 to nominate a person or family who needs assistance.

This article was originally titled “OHC keeps the heat on” in the May 2017 print edition of Plumbing & Mechanical.

Truck of the Month: Giving It All You Got

Truck of the Month: 30 Years Strong

Truck of the Month: Love, honesty and plumbing

Nadia Askar is the former group multimedia editor for BNP Media’s Plumbing Group. She was responsible for leading the direction of the brand’s digital and social presence by ensuring the brand websites and social media outlets are consistently updated, and interacting with readers and followers.