Morris Beschloss
KEYWORDS plumbing industry
Order Reprints
No Comments
As the U.S. economy looks for traction in the second half of 2014, the clouds of disappointing consumer demand could overcome the dynamics of energy development, exports and the limited return of offshore production to America’s slowly recovering manufacturing capacity.

Within the past half century, the main dynamic of America’s gross domestic product world leadership has been generated by an all-time high population of 320 million. This is by far the outstanding growth record of the developed world, comprised of Western Europe (primarily Germany, France and the United Kingdom), Japan and, to a lesser extent, much of Southeast Asia, where consumer demand has awakened as a major factor in these nations’ growth.

But none have come close to the United States’ penchant for consumer products, comprised far beyond subsistence into the arena of luxury, once the habitat of only 1% of the economic upper class. This accelerated consumer demand factor continues to stay at a high 60% level, despite a population boom since the mid-20th century. This has doubled the consumer total, but did not relinquish the appetite for subsistence level as well as discretionary purchases, from which the fast growth population level shows little sign of budging. 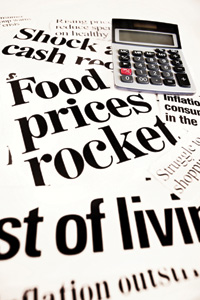 But with mid-year 2014 having passed, with post-Great Recession levels generating only modest economic gains and no significant unemployment improvement, the early surge for new automobiles, houses and the unequaled lifestyles not matched by other world leaders may not produce the expected hopes for a 2014 consumer demand rebound.

Although near-zero interest rates, subsidized by the Federal Reserve Board, have kept a seven-year disinflationary interest rate from generating a postrecession inflation comeback, the food and energy segment of the consumer price index is showing signs of a creeping upturn.

Although foodstuffs and gasoline give no indication of previous postrecession surges, the expectation of higher prices in life’s necessities is likely to dampen the purchasing capability of a consumer public beset by generally flat incomes. Also, the previously expected growth economy is now being met with lowered future expectations.

This could lead to a reverse in consumer confidence by the end of summer, causing previously exuberant consumer buying influences to cease. This will reduce annualized 2014 total GDP growth expectations, which are beginning to sag back to the 2% consumer price spending mark. With a nervous mid-term election awaiting, the early year optimism team could be in the process of losing its membership.

Initial public offerings have traditionally vaulted independent businesses into the mainstream of public investment involvement. This expedient, more than any other, has been responsible for generating medium-sized “independents” ($50 million-plus net worth) into substantial growth, especially in economic sectors that have displayed substantial expansion surges.

This has allowed an attraction of public investment funds into these businesses’ growth engines, without saddling them with imponderable debt that could strangle their balance sheets, eventually slowing growth and leading to distress business sales or, at worst, bankruptcy.

In past postrecession recoveries, such acceleration of “going public” has been a welcome tonic to such intermediate-sized business expansion. In most of these positive developments, management direction and usually substantial ownership have remained with the founder and/or subsequent employees that have been most qualified to keep running these businesses. This stratagem provided the stimulus of private business growth at a time of solid economic recovery.

Disappointingly, such a trend is currently lagging. Financial services, accounting and lending firm Cohn-Reznick says the United States is on track to do only 280 corporate IPOs in 2014. This is less than one-third of the total number researchers estimate should be completed during the year. This is based on the ongoing gross domestic product growth necessary to support the current broader economy’s expansion.

This contemporary IPO trend is particularly disappointing, given the easier access to loans, cost of loans necessary to stimulate IPO activity and attractive interest rates. These experts believe the country should be doing more than 900 IPOs based on the present size of the U.S. economy, of which, historically, 80% of such IPO transactions have been less than $80 million in size.

When attempting to analyze this disappointing lack of IPO intensity — especially in the areas of health care, technology and energy development — one can only conclude that the overall negative political climate, with its penchant for increased regulations and anti-business ownership attitudes, has persuaded many hundreds of prospective IPO candidates to remain with the current ownership status quo.

It also is the reason that incomparable amounts of monetary liquidity are festering on the bottom lines of middle-sized businesses’ balance sheets. It may indicate why the current U.S. equity markets and their established participators are exceeding growth expectation, instead of focusing on the new, expanded business growth formations of previous post-recession recovery epochs.

With an increasing number of multibillion dollar U.S. corporations gaining an expansive segment of their revenues outside of the American homeland, it may come as a surprise that in 2013, 1,000 of these companies reported $2.1 trillion of such earnings. This figure indicates a doubling since 2008, according to a report by Audit Analytics, a research firm in Sutton, Mass. Those foreign-based companies also represented a growing percentage of such companies’ total assets, up from 5.8% in 2008 to 8.7% last year.

According to U.S. accounting rules, these companies should provide public and private investors with an estimate in potential taxes if they were to bring these earnings back home. But as one would expect, these giant corporations are given an escape clause which excludes this provision if corporate boards find it impractical to determine a potential tax bill. Of the 10 companies identified in the Audit Analytics report with the largest amount of offshore earnings, only three disclose what their tax liabilities would be if the U.S. tax provisions were enforced on foreign revenue profits.

General Electric, at the top of the revenue heap, does not disclose, but indicates $110 billion of offshore earnings in 2013, according to financial statements, which represent 17% of its total assets.

Other big corporations choosing nondisclosure are Pfizer, with $69 billion in offshore earnings; Merck, with $57.1 billion; and IBM, with $52.3 billion. All these companies hide behind the provision of “unpredictability” of potential U.S. tax payments because the federal government has chosen not to impose such “stress” on these corporations. These titans justify their positions by claiming such increased overseas investment expenses are incurred in their chosen offshore domiciles.

While the pressure of increased disclosure does not seem to emanate from this vast investment community, top management knows their choice is one that meets with favor by the bulk of their investors.

The only deviation from the continued non-U.S. payment status quo came during the George W. Bush administration, which proffered a nonrepetitive one-year recycling term at a strongly discounted tax rate. This produced a huge amount of monetary support to the U.S. Treasury, beset at that time by foreign wars and widening Medicare expansion.

It is highly doubtful the current administration will take any steps to repeat such largesse, which would prove immensely unpopular with some of the biggest international U.S. companies.

STAY CONNECTED WITH US VIA SOCIAL MEDIA

The 2018 US economic outlook

Morris R. Beschloss is a veteran of the industrial PVF business and a longtime industry observer. His career in the industrial pipe, valves and fittings sector spans more than five decades.

Is the US economy poised for economic growth in 2017?

A look ahead at US economic growth in 2017

Are the trades returning to economic prominence?