It’s without question that technology has improved the mechanical world around us. From my smartphone, I can instantly see the health of hundreds of our boiler plants across the country. A building management system (BMS) can sense occupancy to control everything from lighting to the snowmelt systems. Water heaters can read the voltage through their powered anode rods to calculate the life left on the tank. While technological advances like these have allowed us to bend the rules of mechanical designs, we can’t fall into the trap of using technology to skate around fundamental engineering practices.

This leads me to the discussion of turndown. Turndown is simply the operational range of a device, i.e. maximum capacity divided by minimum capacity. A box fan that spins at 50% on its lowest speed has a 2:1 turndown (1 ÷ 0.5 = 2). For decades, a two-stage heating system able to turn down to 50% was considered “high-tech” because most were simply on/off. In fact, last year I upgraded my home’s HVAC and installed one of my company’s top-of-the-line 98% AFUE forced air natural gas furnaces with modulating 2.5:1 turndown, and it’s been amazing. On low fire and low fan speed, it’s whisper quiet. On shoulder season days, it cycles two or three times per hour, well within the six-cycle per-hour rule of thumb. It’s important to note my home’s R-value did not change, and the furnace is sized properly. Figure 1 compares the turndown ratio for five separate boilers. You can see the difference only affects the bottom end, and while a 10:1 to 25:1 sounds like a dramatic increase, when you do the math, it’s only a difference of 10% minimum fire vs. 4% minimum fire. 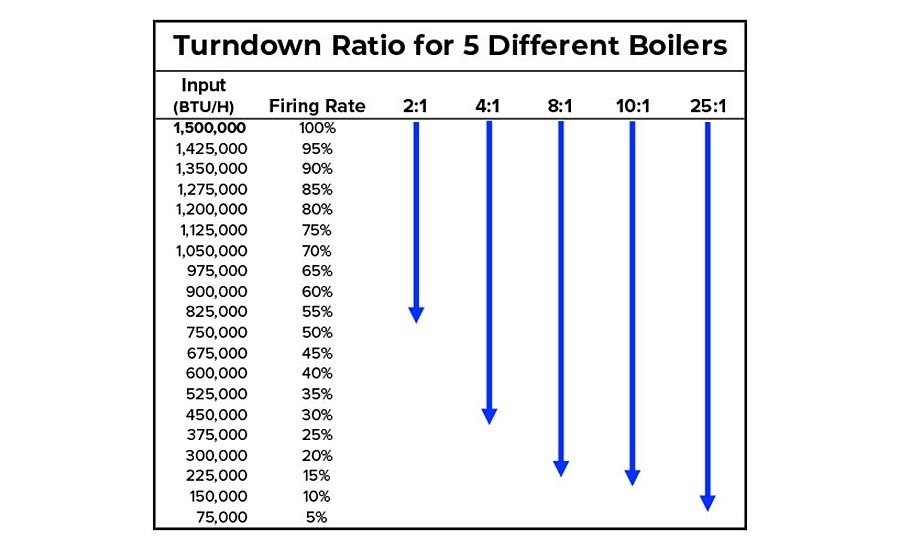 This brings us to the efficiency topic. Fifty years ago, there was not a major focus on thermally efficient building design, especially for commercial buildings. Boilers with 70% efficiency ratings were sized without CAD models and without heating load software, so the engineers had to make a lot of assumptions. The boilers were commissioned, and away they went for years and years. The boiler was hot, the occupants were warm and all was right with the world.

Fast forward 25 years through oil embargos and melting glaciers, and it became widely accepted that we need to be more responsible with the conservation of fuel and with fuel emissions. The federal government incentivized owners to make their buildings more energy efficient by doing things such as adding insulation, replacing doors and windows and, eventually, replacing those low-efficiency boilers.

With these updates, the buildings’ R-value increased by 40%, and the new boiler efficiency increased to 85%. What didn’t change though was the power rating of the new boiler. They simply replaced a 4,000 MBH input boiler with another 4,000 MBH input boiler because it wasn’t in the scope to pay for a new heat loss calculation, and most certainly, the designer wasn’t going to be the one to undersize the boiler and have cold customers. The result was a boiler extremely oversized even on the coldest design day, cycling 8 times per hour on average winter days, and on shoulder season days, it would short cycle terribly. The 2:1 turndown with the small load simply wasn’t enough to allow the boiler to run more than a couple minutes. Thus began the turndown race for the boiler manufacturers and their subsequent marketing push to mechanical engineering firms.

Over the years, we’ve found turndown is often incorrectly associated with efficiency. High turndown does not equal high efficiency. Figure 2 represents a typical condensing boiler efficiency curve vs. incoming water temperature shown at full fire and shown at a 4:1 turndown (25% fire). It is true that condensing boilers gain efficiency at lower firing rates, but those gains are marginal — below 25% fire. If you’re chasing high efficiency by operating a boiler at low firing rates, it can be very tricky because boiler output needs to match the building load. Would you quadruple the number of boilers so they can run together in parallel at 25% fire when one boiler running at full power would’ve met the demand? Does that 3% efficiency gain outweigh the losses associated with the pumps, blowers and wear and tear on the parallel boilers? 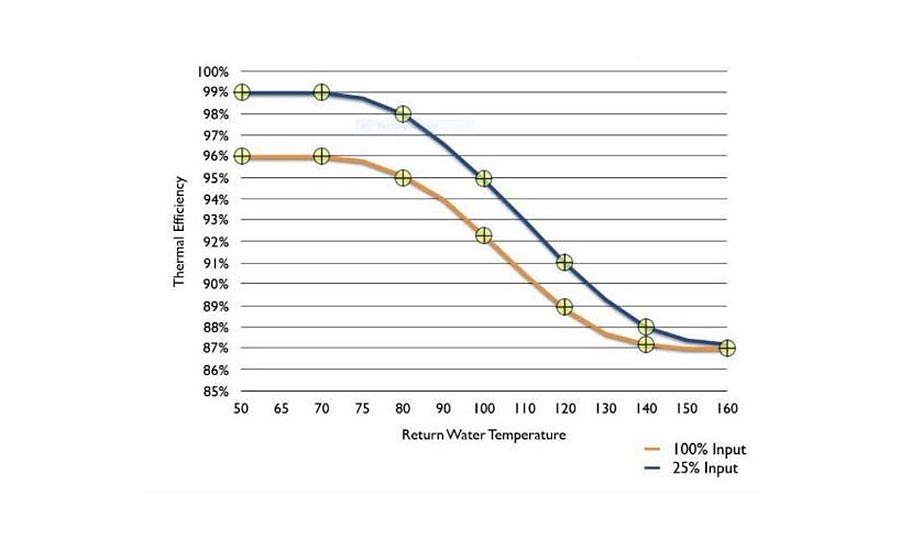 There are countless condensing high-efficiency boilers running today with very high turndown, such as 25:1 (4% minimum fire), which are running 160° F return water and resulting in poor efficiency. You can see at those temperatures, the efficiency is the same regardless of firing rate. In fact, at 160°, there isn’t any condensing of flue gasses happening whatsoever, so the more cost-effective solution is likely a mid-efficiency boiler. The good engineering practice here is to design the system to run at higher efficiency at any firing rate by optimizing outdoor reset, slowing pump flow rates and sizing emitters to achieve cooler return water temperatures.

So where is a high turndown boiler applicable? First of all, “high turndown” is a relative term. Good designers I know say 8:1 is the highest you’ll ever need, and sometimes, it’s the most a building would even tolerate. By turning down the firing rate, the flow rate will need to drop to maintain Delta-T or the Delta-T will drop to maintain flow rate or a combination of both.

If a building loop was designed for a maximum of 400 gpm, what would happen if flow was reduced by 96%? Or if zones were designed for a 40° Delta-T utilizing the cool return water for efficiency, but at minimum fire, they’re only seeing 2° Delta-T? What is the boiler efficiency, and will you have problems with valve hunting, sensor accuracy and cold zones? In general, turndown higher than 8:1 is a Band-Aid to keep a boiler from short-cycling (more than 6 times per hour) when it is grossly oversized for the actual heating load.

This chart in Figure 3 represents a case study done 10 years ago using boilers with a 4:1 turndown ratio. The building is a five-story city hall utilizing (3) 1,500 MBH boilers (minimum fire 375 MBH). The building heating and domestic hot water load is represented by the hours of runtime at every 100 MBH increment. The area shaded in yellow is below the 375 MBH threshold where one boiler is cycling off at least once per hour, totaling 509 hours. The area shaded in green represents boilers running continuously without cycling, totaling 7,696 hours. At minimum fire to meet the minimum load, the boiler would cycle around three times per hour, which is great. 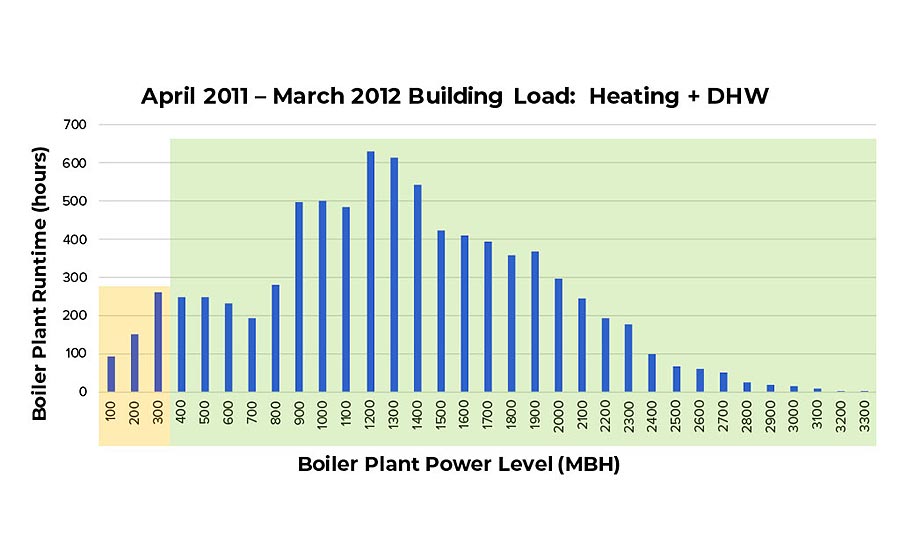 For comparison, a 10:1 turndown boiler would cycle about once per hour. Using a natural gas rate of $9.20/MCF, the cost of the fuel used during the yellow-shaded period is $1,060, compared to $95,670 during the green-shaded period. If efforts were made to reduce costs, relatively speaking, there’s nothing to gain on the low power periods when the boiler is cycling. In other words, boilers with higher turndown would not provide any realistic improvements in cost, efficiency or wear and tear.

It’s worth noting many of our products today have turndown well above 4:1, but the study shows how a properly sized system can operate beautifully throughout the year with a modest 25% minimum firing rate.

With all this mind, I wanted to leave you with a few tips to ensure you can maximize your turndown efforts. First, quality design work is timeless. Second, utilize resources such as representative agencies and manufacturers to minimize your assumptions. Just because a product specification sheet says it can do something doesn’t mean it’ll be happy doing so. And third, ensure you take the time to select the right tool for the job, and don’t use technology as a substitute for fundamental engineering practices.

Dan Goellner is regional manager for Raypak, a division of Rheem. Goellner holds a bachelor of science degree in mechanical engineering from the University of Missouri and a MBA from Webster University. He grew up working in the family HVAC business, and he has 19 years of professional experience with design, project management and sales in the commercial construction industry.