Safety and SIM: A hospital’s story

A snow and ice melting system clears the way for healthcare workers and patients at Adena Regional Medical Center.

Safety and swiftness are paramount for those who work within emergency medicine. When inclement weather strikes, it is crucial that healthcare professionals can perform their jobs efficiently without having to worry about the elements. Adena Regional Medical Center in Chillicothe, Ohio, recognized how snow and ice can threaten the safety of not only medical professionals, but patients as well. When the hospital decided to expand its emergency department, they considered safety by installing a hydronic-based snow and ice melting (SIM) system in a helipad, a walkway that leads to the emergency entrance and a walkway that leads to a patient entrance.

“Time is of the essence when the rescue squad brings in a sick patient,” says Jim Jones, Adena’s building systems supervisor. “Our nursing staff and the rescue squad work quickly to move patients from the ambulance or helipad into the building, so we want to create a safe working environment. A SIM system can provide a bit of assurance, as worries about falling on an icy or snowy surface while handling a patient are minimized.”

When building a SIM system for high-stakes environments, the design process is important. Jeff Weller and Mark Hunter from the mechanical contracting company, Weller’s Plumbing & Heating, teamed up with manufacturer’s representative Weber-Huff and PEX piping manufacturer REHAU to sketch out the design. The team specified four different zones of the SIM system, with three zones for the sidewalks, and one for the helipad. With a goal of having the highest Btu output with the least amount of pipe, they calculated that the design required a 10,500-square-foot heated area with 52 circuits and 7 manifolds. A snow melting capacity of more than 1,500,000 Btu/h was provided to the area using warm fluid circulating through 14,600 feet of 3/4-inch RAUPEX O2 barrier pipe.

While the SIM systems within the helipad and sidewalks both relied on RAUPEX pipe, the design and installation differed.

“The helipad needed extra concrete thickness since it supports a greater load of weight compared to the sidewalks,” says Weller, partner of Weller’s Plumbing & Heating. 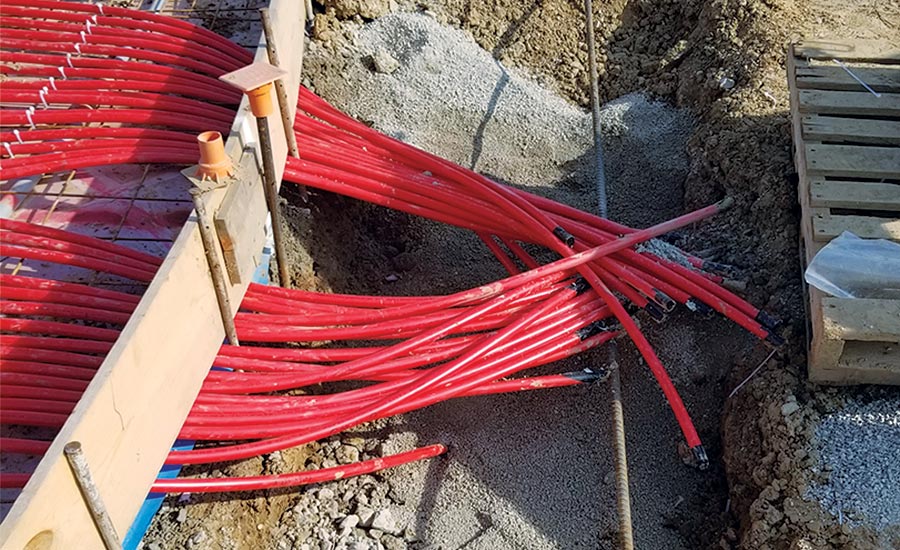 The RAUPEX piping is stubbed out of concrete forms around the helipad for a connection point to the PRO-BALANCE® manifolds in concrete vaults. Photo Courtesy of REHAU.

For the helipad, 12 inches of concrete were placed atop 2 inches of insulation board to prevent heat from sinking into the ground. While the PEX piping within the helipad was zip-tied to wire mesh, Creatherm boards were used to install the piping within the sidewalks. The boards were placed 5 to 6 inches below the concrete sidewalks, and from there the installers simply snapped the piping in place with pre-made building plastic diamonds inside the boards. In addition to ease of installation, the Creatherm boards also minimize heat loss by preventing heat from travelling into the ground below.

To further prevent heat loss, the manifolds were encased in concrete vaults underground. The team also used 820 feet of REHAU INSULPEX running from the basement to the manifolds. This pre-insulated PEXa pipe efficiently transfers warm fluid in underground applications, making it ideal for hydronic distribution. A concern the team had was evenly heating the space given the circular shape of the helipad and the curves of the sidewalks, but the flexibility of INSULPEX allowed the piping to easily match the contours.

Another challenge during installation was coordinating the routing of each circuit to its designated zone.

“Each circuit length was different,” says Weller. “You have to stay on your toes during installation so you don’t waste any pipe.”

In order to prevent waste and additional cost, the team used a coil schedule report provided by REHAU and a PEX uncoiler, which allows for faster, easier installation.

The team installed the SIM system in two phases and had it operating in time for winter 2019. Phase one entailed installing the system into the helipad and sidewalk leading from the helipad to the emergency entrance, while phase two concentrated on the patient entrance.

“The helipad SIM installation took about a-week-and-a-half, which included a 6-mm vapor barrier laid down on a compacted stone base,” Weller explains. “Then, the 2-inch EPS polystyrene boards were placed on top of the vapor barrier. The steel mesh was built up with rebar chairs in order for the 3/4-inch RAUPEX to be within 4 inches of the top of the helipad concrete.”

“We also tested the system to make sure it was leak-free,” Hunter, partner of Weller’s Plumbing & Heating, adds. “We started with 40% propylene glycol, but had to decrease it to 30% to improve the performance of the pumps.” The higher the propylene glycol percentage, the more viscous the solution is, which is harder on the system’s pumps. 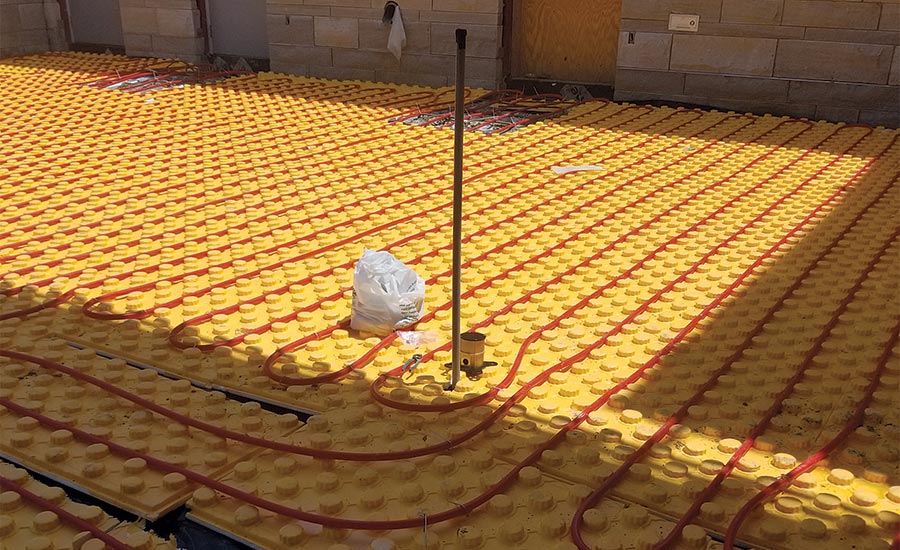 The snow slab sensor is protected during the concrete pour to ensure that it is exposed for the detection of precipitation and moisture once installation is complete. Photo courtesy of REHAU.

The overall expansion project, which increased the hospital’s square footage from 16,500 to 59,000, started in the fall of 2018 and ended in late 2019. Having operated the SIM system for only one winter, the hospital is confident about its future performance.

“In its first season of operation, the system ran flawlessly,” says Jones. “Over the years, I’ve worked with a lot of systems that didn’t function the way they were supposed to. The SIM system performed the way we hoped it would, keeping the sidewalks and helipad clear.”

The automated activation of the SIM system is another aspect of the application that Jones appreciates. “The user friendliness of the system surprised me,” Jones adds. “We don’t have to monitor it constantly, which is nice because we are already busy enough. It means a lot to have a system that runs as it should on its own.”

Connected to the hospital’s building automation control system, a Tekmar controller allows the hospital staff to see from their computers whether the system is running or not. The system controls data provided by outdoor sensors, which prompts the SIM system to operate only when snow and ice can accumulate.

“The snow slab sensor detects precipitation, while the ambient air sensor informs the system of the temperature,” explains Weller. When moisture and a low temperature are detected, the system prepares for melting, which eliminates the need for the hospital to anticipate inclement weather and schedule snow removal or salt treatments. Once the helipad and walkways are free of snow and ice, the system automatically shuts off. Keeping snow removal equipment and salt off of Adena’s helipad and sidewalks helps lessen concrete damage, saving the hospital money in the long run.

Aside from the SIM system, project highlights of the Adena emergency department expansion include all-private rooms, more exam rooms and treatment areas, a new enclosed café and improved entry and traffic patterns for patients, visitors and emergency vehicles. Limited emergency room capacity is no longer an issue with the expansion, promoting a better experience for patients and a better working environment for healthcare professionals. With the addition of a SIM system, the path to excellent patient care at Adena is clear, further contributing to the safety and wellbeing of both healthcare workers and patients.

Erin Slupe is a communications and marketing Intern at REHAU. A rising senior at Christopher Newport University, she is pursuing a bachelor’s degree in communication studies and psychology. For additional information, please contact rehau.mailbox@rehau.com