PMI CEO and Executive President Kerry Stackpole said the organization’s goal for the annual conference is to get its members up to speed on the latest information and regulations impacting the industry.

“We want to get them updated on what’s happening regulatory wise and what some of the new trends are,” he said. “For example, we talked about workforce development and how it’s changing along with innovative ideas like hosting a parents’ day at manufacturing companies to get parents to come and see opportunities for their own children beyond college or instead of college.”

One of the things PMI has done this year was refocusing the conference and naming it Manufacturing Success, Stackpole noted. 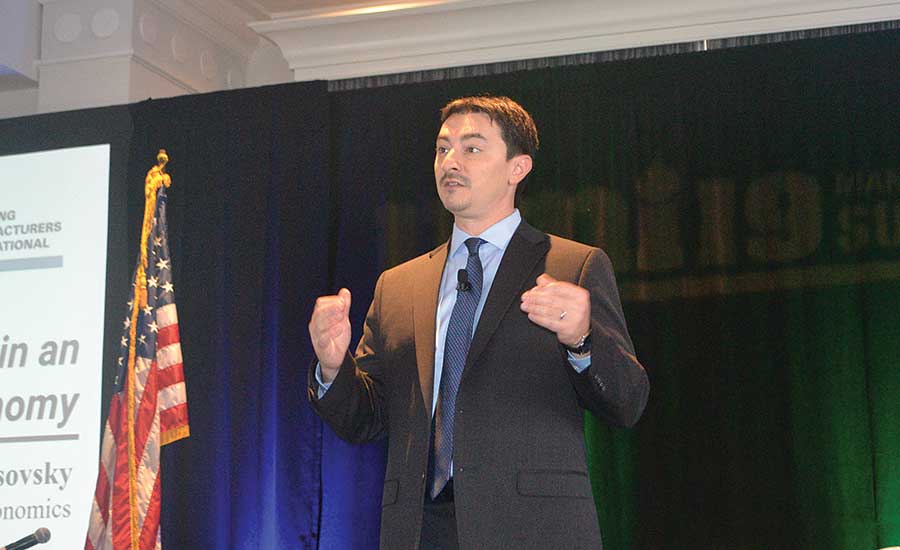 “We’re going as far as calling it the next Great Depression,” Chausovsky said. “What I mean by that is it’s not going to be like 2008-2009; it’s going to be more like the 1929 economic downturn. Now, it’s not guaranteed this is going to happen, but unless we change this behavior, unless we start thinking about how do we address some of the shortfalls in government spending, this is the likeliest of outcomes. We have about a decade to prepare ourselves. The government is not going to take care of you. You’ve got to put certain things into play to prepare yourself and your business for this calamity that is looming out there in the 2030s.”

Chausovsky’s advice for preparation ranged from living below means to learning new skills to make yourself more marketable in the job market to being ready to buy at the price cycle low.

“Recessions are amazing opportunities,” he said. “Think about those people who were positioned well going into the 2008-2009 downturn. What were they doing? They were buying — buying businesses, property and assets of all type. That’s the key. When economic depression does emerge, you have to be ready for it. You have to have cash ready to put to work when everyone else is running for the hills. It’s the same buy low, sell high mentality. The Great Depression, if it unfolds the way we are expecting, will be the biggest wealth creation opportunity of your entire life. But in order to take advantage of it, you have got to be prepared.” 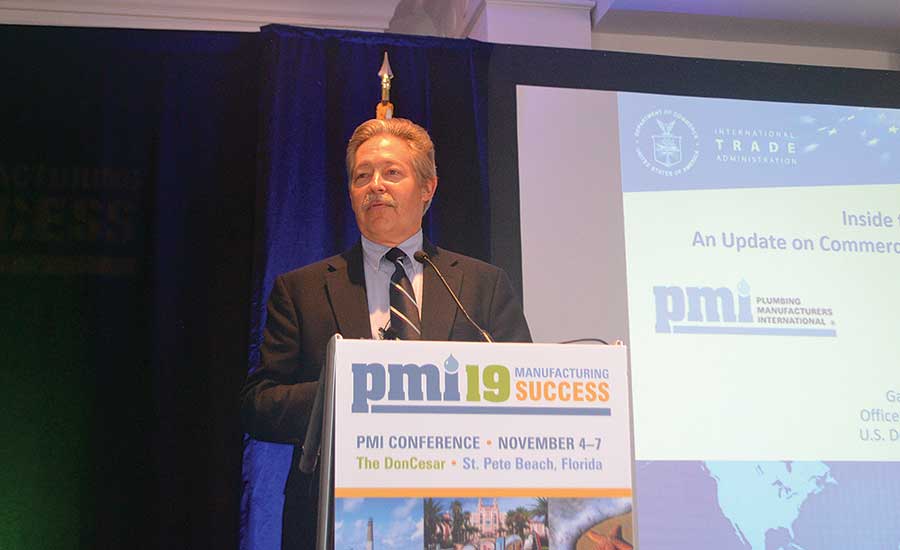 Gary Stanley of the U.S. Department of Commerce states that despite everything happening with trade and tariffs in the economy, plumbing products have seen a steady increase in exports over the last several years.

THE IMPACT OF TARIFFS

Stephanie Salmon, PMI government affairs consultant, presented an advocacy and government affairs update, during which she discussed the impact of tariffs on the United States. According to Salmon, as of August 2019, the tariffs imposed so far have cost United States corporations $34 billion. In August alone, Americans paid $6.5 billion in tariffs, a 48% increase from the same month last year.

“We know from looking at trade and tariffs that the additional imposition — I’ll call it taxes for lack of a better word — is certainly impacting manufacturers,” Stackpole said. “What’s going to happen is that’s going to impact the consumer. Our manufacturers are going to pay more, so they are going to have a higher priced product. Consumers are going to start thinking, ‘Maybe I should hold off on my remodeling,’ ‘maybe I don’t want to buy that new faucet,’ ‘maybe I don’t want to spend that money this time around.’ And you’re going to have reduced demand. The economy is already showing some softness, so I think this is a real risk.”

According to Chausovsky, the brunt of that impact from the tariffs will clearly fall on the consumer. Chausovsky cited an example of what happened with washing machines when the Whirlpool Corp. lobbied Congress in 2017, asking for tariffs on foreign companies. As a result, the U.S. government passed a 20% tariff on a certain amount of washing machines, and beyond that amount, it would be a 50% tariff in 2018.

“Over the course of that year, the average price of a washing machine basically went up about 12% to 15% to the tune of about $90 per washer,” Chausovsky said. “As a result, the U.S. government collected somewhere between $80 to $90 million in tariff fees from foreign imports of washing machines. At the same time, we saw a much bigger impact on the consumer. The interesting thing is the way we have been psychologically trained to think about pricing because we’ve been trained to think of equal pricing for washer and dryers. There was no tariff on dryers, but as prices for washers went up about 15%, those manufacturers were very happy to raise the price of the dryer as well. Over the course of 2018, we spent $1.5 billion of additional consumer funds on those types of products, even though the U.S. government only collected less than $100 million in tariffs. So you can see clearly where the brunt of that impact is being felt.”

Gary Stanley, director, Offices of Materials Industries, U.S. Department of Commerce, was quick to note the tariffs were not enacted on some whim, but after an extensive investigation on trade policy violations by China.

“There were five key findings,” Stanley explained. “The first one is China’s unfair technology transfer regime. Secondly, there are discriminating licensing restrictions for foreign participation in the market. Third, China’s outbound investment regime encourages Chinese companies to invest abroad while the government helps guide and facilitate those efforts. Fourth, the Chinese government conducts and supports cyber intrusions into U.S. commercial networks. Lastly, we know there is an ongoing problem with Chinese theft of intellectual property. So this was not done on some kind of whim.”

However, despite everything happening with overseas issues and challenges, Stanley noted the plumbing product sector has actually seen a steady increase in exports over the past several years, when almost every other sector has experienced a decline in exports. 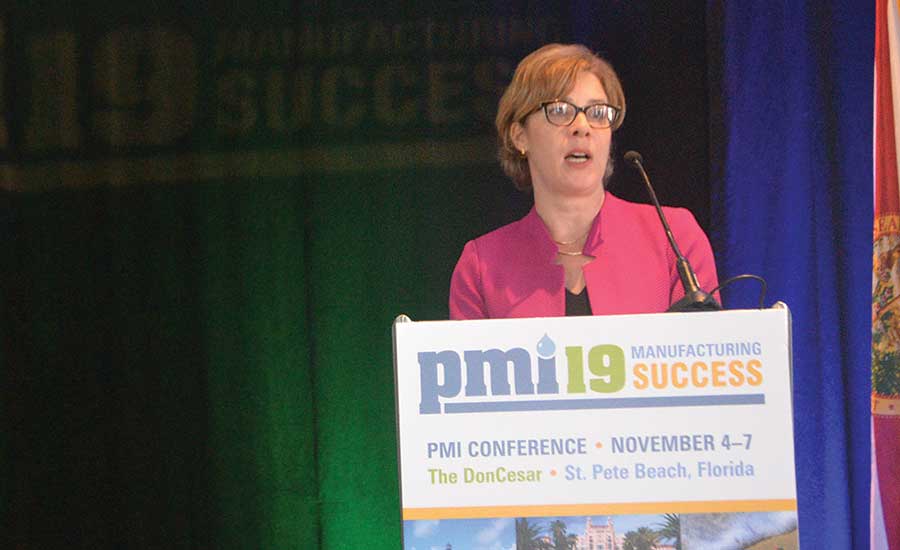 The California Consumer Privacy Act (CCPA), set to take effect Jan. 1, 2020, is a huge hammer that will impact the industry, Stackpole noted. The law will require a range of things plumbing manufacturers have to do interacting with consumers and collecting consumer information. PMI expects these privacy laws and additional regulation will spread on a state-by-state basis.

Joan Stewart, of Counsel, Wiley Rein, was on hand to present some of the new consumer data protection requirements. Stewart notes the CCPA grants the consumer a number of rights, including notice, right to access, right to deletion, right to opt-out (and children’s right to opt-in) and right to equal service/nondiscrimination.

“Our member companies really have to look closely at what information they collect from consumers, where it goes and who’s the repository,” Stackpole said. “It’s really a complex field.”