As population increases and water pressure is harder to control, thermal expansion has become a hot topic of discussion among contractors.

There seems to be some misconceptions and false assumptions surrounding thermal expansion and the use of expansion tanks, and we'd like to try to clear these up. The five W's (who, what, why, where and when) provide a good framework for this, with a "how" thrown in now and then for good measure. 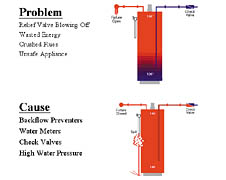 The "who" is you, of course. You want to have a good understanding of expansion tanks so you can recognize and solve thermal expansion problems for your clients.

What is Thermal Expansion?

When cold water is heated, the water expands. This thermal expansion occurs in all residential and commercial plumbing systems that have tank-type water heaters. Though usually not a problem, thermal expansion can lead to high water pressure and cause expensive problems. The main reason to have an expansion tank in a domestic water system is to prevent the damage from high water pressure, defined as anything over 80 psi.

In most cases, expanding water simply flows back into the main supply to the house. But thermal expansion is becoming more of a problem now because backflow preventers and pressure regulators are being used more frequently. As increased population has led to increased water demand, public water pressure has been more difficult to control. Building codes now require pressure regulators when pressure exceeds 80 psi, and backflow preventers are sometimes required to prevent cross-contamination.

Newer pressure regulators operate differently from most older ones. With a newer one in place, expanding water will pressurize the system up to line pressure, then flow into the main line through a check valve built into the regulator. Assuming the water heater's relief valve kicks in as it should, this backflow will happen only if the line pressure is less than 150 psi. (Note that in hard water areas, the check valve in the regulator tends to get stuck and so should not be depended on for protection.) Older regulators usually don't have that check valve. So with those older ones and with backflow preventers, the expanding water will simply build up pressure until the relief valve on the water heater drips (lucky) or something in the plumbing system pops (unlucky). In either case, the plumbing is being subjected to high pressure and to large pressure fluctuations multiple times daily, and something is going to wear out.

High water pressure will add roughly 30 percent to the water bill just because more water flows out the tap every time it's used. High-pressure makes relief valves leak, hiking the bill even higher. Water heaters suffer when high pressure cracks the glass lining, and you may even hear them groan as the metal flexes. High pressure causes faucet washers and automatic valves to wear out faster. Sink and washing machine hoses are more likely to burst. High pressure caused by thermal expansion produces uneven water flow, and it magnifies water hammer. For folks who have to deal with periodic water rationing, high water pressure causes not only higher water bills, but threatening letters from the water company and perhaps even a flow restrictor at the meter.

What Can Mitigate High Pressure?

Before expansion tanks were common, plumbers used to put an adjustable pressure relief valve in the system, anywhere downstream of the regulator. Often it was installed on outdoor plumbing and placed to drip on a flowerbed; it was put close to the front door so the owner would notice if it dripped too much. However, relief valves used this way are made to operate so often they can fail quickly and leak all the time. Hard water makes the problem worse. Perhaps a better alternative is the Watts Governor 80. This is a toilet fill valve that is designed to relieve any pressure over 80 psi. It has the advantage of being able to be used in any climate, not just where freezing isn't a worry.

When is an Expansion Tank the Best Choice?

The expansion tank offers a benefit the others cannot. Pressure will fluctuate very little with a correctly sized and inflated expansion tank. With the other methods, the pressure must go up 15 to 30 psi to operate the relief or fill valve. It's best to keep pressure as steady as can be and as low as possible (but still maintain good flow), particularly if water hammer is a concern. There's an advantage to using both an expansion tank and a relief valve in homes using a pressure regulator. In our hard water area (Northern California), regulators last roughly five to 10 years. Failed regulators are usually not discovered until someone notices a leaky relief valve on the water heater or a supply hose bursts. That's why it's a good idea to use both an expansion tank for thermal expansion and a relief valve installed in a visible location. This covers the bases and lets you know the regulator is failing sooner than later.

How Can You Assess Your Clients' Systems?

Start by checking static pressure with a gauge both before and after the regulator (assuming there is one). First check the upstream pressure. (You'd expect a reading well over 80 psi since a regulator has been installed.) Next, run a small stream of water indoors and watch the gauge you've put downstream of the regulator. Turn off the faucet and see if the pressure creeps up to line pressure in just a few seconds. These checks will let you know if the regulator is working and if water is leaking by it. Running the water will also briefly take care of any thermal expansion that would show up on the gauge.

There is one more thing to check with the gauge. Make sure there are no leaks and ask that no one run water for about 20 minutes. Leaving your gauge downstream of the regulator, fire up the water heater. In a few minutes the gauge needle should start to rise. If it goes up to line pressure (as measured upstream of the pressure regulator) and stops, you know the check valve in the regulator is working correctly. If it continues to rise, you know the check valve doesn't work. If it goes up to 150 and stops, you know the relief valve on the water heater is working. If the gauge ever goes over 150 psi, don't leave the premises without replacing the relief valve on the water heater, because the relief valve is no longer protecting against high pressure or, more importantly, high temperature. You can't risk having a client's house leveled by an exploding water heater. It's been our experience that about one quarter of the relief valves we test don't operate properly. Of those, nearly one in 10 is plugged up and will not let water pass. Those are the dangerous ones.

How Should an Expansion Tank be Sized and Pressurized?

If your test showed water pressure over 80 psi (downstream) when the water heater fired, an expansion tank is definitely needed. Expansion tanks are sized to the volume of the water heater and plumbing. Get one that will take care of all of those gallons. Because of shipping regulations, tanks come pre-charged at only 40 psi. If your gauge showed 40 psi as the household water pressure, you can leave it at that. Otherwise, pump it up to gauge pressure before installing it. (Pumping it up after installation works only if there is no water pressure against it.) This makes the most effective use of the tank. The bigger the difference between the air pressure in the tank and the actual water pressure, the less effective the tank will be at controlling thermal expansion.

Where Should the Tank Be Put?

The tank should be installed in a cold line. Anyone who wants to put it in a hot line should be prepared to get calls from clients complaining that hot water is now running from the cold taps; they may also tell you they particularly dislike the toilet steaming. What's going on? The expansion tank is pushing hot water back into the cold line when cold water is used and causing trouble for all concerned. The rubber diaphragm in the tank will probably have a shorter life in hot water, as well.

Heating systems and domestic hot water systems use different expansion tanks that should not be interchanged. Heating system tanks won't take the higher pressure or oxygen that DHW tanks are designed for. It may seem we're stating the obvious, but we have actually seen the wrong kind of tank installed.

What Else Should You Consider?

Install the tank so it will be easy to service. At some point it may need to be recharged, and many years from now it's going to leak. So provide easy access. Take a look around and avoid placement where leaking could cause damage. Remember, it can go on any cold line downstream of the regulator. Be sure to install the tank with good support so that it will not sag down or strain the pipes when it has some water in it. Next, add an adjustable pressure relief valve or install a Watts Governor 80 in the toilet. If you use a relief valve, set it 20 psi higher than the regulator setting. Install it so its drain line can be seen, and make sure to let your client know what a running relief valve means.

If a system involves old clogged steel plumbing, you may run into a few difficulties. If you set pressure down to the "right" level (ideally, 50-60 psi), you may not get adequate flow from the taps. It might be necessary to increase the water pressure in the system and air pressure in the tank. If the main line is restricted, a larger expansion tank (like those used for wells) will help water delivery if it is installed where water comes into the house. Ultimately, the best fix for old, rusted steel piping is replacement. However, many clients resist that proposition, thinking it will be too much trouble.

The need for expansion tanks isn't mysterious at all if you keep a pressure gauge handy with your tools. Used correctly, that gauge will demystify the complexities of pressure and flow and help you to take care of your clients' plumbing woes.