This website requires certain cookies to work and uses other cookies to help you have the best experience. By visiting this website, certain cookies have already been set, which you may delete and block. By closing this message or continuing to use our site, you agree to the use of cookies. Visit our updated privacy and cookie policy to learn more.
Home » New standard would mandate ECMs in circulators
Radiant & HydronicsPlumbing NewsRadiant/HydronicsPlumbing, HVAC and Fire Protection CodesHydronic Technology

The Circulator Pumps Negotiated Rulemaking Working Group submitted its negotiated standard to the DOE in late 2016.

Operating under the Appliance Standards and Rulemaking Federal Advisory Committee (ASRAC), the working group submitted its term sheet to the DOE in December 2016. However, due to regulatory gridlock in Washington, the rulemaking process has been delayed indefinitely, leaving the industry to press ahead on its own during a time of extreme regulatory uncertainty.

The Circulator Pumps Negotiated Rulemaking Working Group submitted its negotiated standard to the DOE in late 2016, though the DOE has yet to take any action on it.

“It will eliminate all split-capacitor motors, all induction motors, out of the marketplace,” Taco Comfort Solutions Vice President of Governmental Relations and Sustainability Mark Chaffee says. “With any regulation, the DOE can’t mandate a technology, so they can’t say that it has to have an ECM motor, but the only way to achieve the level being set with today’s technology is to go with ECM technology with some controls, in some cases. So, when we are taking a look at the current market landscape, not only would it eliminate all PSC [permanent split capacitor] induction motors, but it would also eliminate about 10% of the current ECMs that were on the market.”

Don Kahn, senior product manager, product management, Wilo USA, says the standards are similar to what they have been adhering to in Europe for years.

“Wilo USA and Wilo SE had members in the working group, and most of the standard are similar to the existing European standards, so it was not a foreign topic for Wilo as a whole,” Kahn says.

Not only would the standard increase circulator efficiency — it would also represent a change in installation practices for some installers.

“With any product, it’s going to be an adjustment, but we offer a broad range of products and functionality of those products,” Chaffee says. “The Taco 007e is a drop-in replacement for our 007, and it just happens to be an ECM version. So in terms of training, it’s just experiencing the new product and getting comfortable with it.

“Some of those are going to be easy; however, some of these do have a lot of features, displays, programming and different options. Not only are they efficient, but they can offer a lot of benefits for overall efficiency, such as running in differential temperatures and displaying your supply and return temperatures. Some of those will take a little getting used to, but I think whenever you have new technology and increased efficiency, there’s a little learning curve, but it’s not overly steep.” 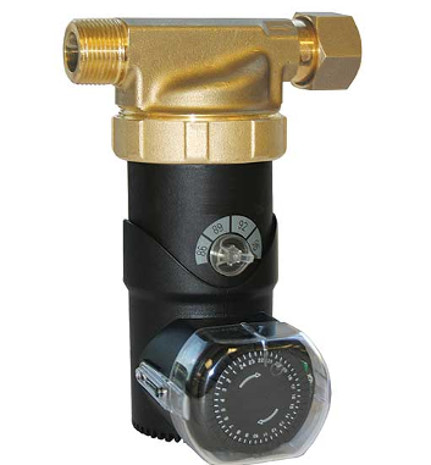 According to the Hydraulic Institute, the new circulator pump efficiency standard would save 0.7 quads of energy, or the annual energy use of 4 million U.S. homes. Photo credit: Bell & Gossett, a Xylem brand

John Siegenthaler, PM’s hydronics editor and principal of Appropriate Designs in Holland Patent, N.Y., says retrofit replacements should not be problematic for most installers.

“You would just pull out the old pump if it failed and, with the same flange-to-flange connection, the other one would slide in place, and you’d wire it up the same way,” he says, adding that many installers already have experience with high-efficiency circulators. “I don’t know of any manufacturer that does not offer a high-efficiency model. They may not have their whole product line dedicated to it, but I have to believe they’re looking at that as where things will inevitably go.”

Despite stakeholder agreement on a consensus standard, the DOE is at a standstill with most of its appliance regulations. Typically, DOE would have released a notice of proposed rulemaking (NOPR) roughly six months after receiving the term sheet from the working group; however, DOE has taken no action on the circulator standard for more than a year.

“We are waiting currently for the NOPR to be released by the DOE,” Chaffee says. “I think without the Trump Administration in office, it probably would have been [released] in that May or June 2017 timeframe, and in the final term sheet with the DOE, the goal was to have a final rule by the end of 2017. That was the goal of the ASRAC in their recommendation to the DOE at the time, but we’re still waiting for the NOPR.”

“We initially recommended and hoped that [DOE] would have a final regulation published in 2017,” says Peter Gaydon, technical director for the Hydraulic Institute, which was heavily involved in creating the standard. “They’re at least a year behind in that process, it seems.”

“At the end of last year in December of 2016, we came to an agreement,” Chaffee says. “The DOE is sitting on it. We are not alone. If you follow any of the regulations, at this point, a lot of people are waiting for a lot of stuff, and the DOE is not issuing anything, nor are any regulations coming out of Washington, D.C. for anything.

“With the transition to the new administration, a lot of things have been put on hold. The Trump Administration certainly ran on ‘less regulation and less red tape,’ and [now] … if one comes in, two go out. Right now, we have paralysis for regulations.”

Mark Handzel, vice president of product and regulatory affairs for Xylem, says the working group was warned early on that the rulemaking would likely be delayed.

“When we finished in December 2016, we were informed by a DOE representative that with the election of President Trump, there would be dramatic changes,” Handzel says. “He didn’t know if the standard would even see the light of day, and we still do not have any direction from the DOE — no date associated with it.”

Despite the current lack of action within the DOE, the pump industry is still moving toward ever more efficient technologies, and many manufacturers already offer a wide range of products that meet or exceed the circulator energy efficiency requirements proposed by the working group.

“It looks apparent that manufacturers are all moving in the direction of efficient circulators,” Siegenthaler says. “I’m sure they anticipate regulations at some point, but the good news is they’re proactive rather than reactive. They see that, globally, high-efficiency motors are the only thing you can use in the European market, and it’s been that way since 2013.”

“As an industry, this is a transformational moment,” Chaffee says. “Really, [high-efficiency circulators] deliver an amazing amount of savings and just make us, as manufacturers — as a complete industry — a lot more responsible for the types of products we’re putting out there and the energy they consume. It’s a win-win for everyone.”

“Even if the regulations are delayed, there’s a very proactive move on the manufacturers to get that technology in there,” Siegenthaler agrees.

While the standard is stuck in limbo, a circulator energy efficiency labeling program is already in development at the Hydraulic Institute.

“As a trade association, when the commercial and industrial pump energy efficiency rulemaking came out in 2017 as a final regulation, we had a labeling program in the works for that,” Gaydon says. “We developed what we called the HI energy rating — a metric that’s underpinned by the DOE regulation and the test procedures, which we wrote as well. They represent essentially the percent power savings over the baseline case.”

Attaching consumer labels to circulator pumps makes sense, as circulators are more of a residential product, Gaydon says. And while the Hydraulic Institute would normally wait for the DOE to complete its rulemaking before implementing energy efficiency labeling, the lack of movement in the regulatory body has prompted the Hydraulic Institute to proceed without the DOE’s final rule.

“What we would prefer to do would be to reference the DOE regulations and say the pump should be tested per the DOE regulation. However, we don’t know if or when DOE is going to publish that. So, within this circulator pump labeling program, we’ve written a test procedure that’s consistent with the ASRAC term sheets, and our committee balloted on that document back in the fall; now, we’re getting through those comments and we hope to finish the program guide, make updates, go through another set of balloting of how we would operate the program and then be able to launch that program in 2018.”

Ultimately, the goal of labeling is to be able to communicate energy savings to the end user while also promoting partnerships with utilities that offer energy-efficiency rebate programs for customers who choose efficient technologies. Meanwhile, by labeling products, manufacturers will have a more solid way to compare products.

“You wouldn’t want, as a manufacturer, to try to set an arbitrary bar when there may be a pending standard,” Siegenthaler says. “In what is already been put together for the DOE standard and in the Hydraulic Institute’s labeling program, there’s a methodology to assess that energy efficiency.”

Even without the DOE regulation in place, circulator manufacturers are already shifting toward higher efficiency through ECMs and other technologies, though perhaps not as quickly as if DOE were to complete its rulemaking.

“Just about every manufacturer offers high-efficiency circulator pumps, but this complicates things for us,” Handzel says. “We were expecting the regulation would force the market to switch [to ECMs]. Still, we’re certainly seeing a willingness to move to the high-efficiency bracket.”

Manufacturers are continuing to drive the U.S. market in the absence of the DOE’s input.

“We’re all in agreement with what’s coming, but we’ve decided not to wait,” Chaffee says. “All of the manufacturers that were at the table, the industry advocates, the appliance awareness folks, the DOE — we were in agreement that this was a good idea. We’re continuing to move forward, both as a company and an industry, voluntarily.

“We’re all under the assumption that this will happen — it’s just a question now of what’s the exact date of this taking effect,” Chaffee adds. “It’s a bit of a moving target, and as with anything, uncertainty breeds uncertainty. We’d much rather know what’s coming and when it’s coming.”

“Additionally, thousands of pump manufacturing, pump distribution and pump installation jobs will be supported by this standard.”

The letter was also sent to members of the House Committee on Energy and Commerce as well as the Senate Energy and Natural Resources Committee.

Jen Anesi-Brombach: New beginnings and a thank you

Truck of the Month: All Types Plumbing and Drain, Tooele, Utah

Jen Anesi-Brombach was a Chief Editor of Plumbing & Mechanical.

Examining the effects of flow reversal in circulators