It's all about heat transfer

Snow-melting systems come in many different sizes and are used in a wide variety of situations.

Heat transfer. In a nutshell, that’s what hydronic snow-melt systems are all about. Radiant tubing — typically embedded in concrete — carries a warm antifreeze mix to transfer heat to the material that surrounds them.

As this heat transfer takes place, with heat moving to cold, the mass of surrounding surfaces gradually warm to just above freezing temperatures.

A boiler system with modulation can improve control of the heated surface temperature. Either a fully modulating burner, or the lead-lag staging of boilers, would allow a system to meet the dynamic load requirements for optimal system efficiency.

To prevent thermal shock, with a typical non-con cast iron boiler, it’s necessary to isolate the boiler from the snow-melt system with a heat exchanger and the appropriate piping pumping and control set.

Ah, but there’s this: The new generation of mod-con boilers take this brutal jab in stride. The broad Delta T (the difference between supply + return temperatures) guarantees the formation of condensate, and these new boilers — by design — extract valuable Btu in the process without the risk of thermal shock.

The piping material can be any number of substances, but the three most popular are PEX (cross-linked polyethylene), PE-RT (polyethylene raised temperature) or super flexible and durable EPDM-ethylene propylene diene monomer, a synthetic material. These materials are flexible and durable, have good high-temperature properties, and have a proven record for long life and durability.

A common misconception is that they cost a lot to operate. Snow-melting systems aren’t operated all year long. In fact, most of them only operate in the presence of ice or snow. The typical snow-melt system only operates for brief periods at a time. Because of this, systems usually cost about $0.25 per square foot per year to operate — and that’s in higher-snow areas. When building owners ask: tell them to compare those prices with manual and chemical methods used to keep surfaces free from ice and snow.

There are safety advantages as well. Can a medevac helicopter afford the risk of landing on a frozen rooftop? Can the team rushing from it do so safely if they’re sliding on ice? Down below at the front door, though perhaps a bit less dramatically, patients and visitors may be at risk if snow and ice are present on the walkways and parking lots.

Consider the advantage of greatly reducing the institution’s liability exposure.

Walkways, driveways, commercial trucking ramps, hospital entrances and helipads are great uses of snow-melt systems. Drainage systems are another good application for snow-melt technology. Water, once it goes below ground and away from the warmth of the sun, might otherwise freeze.

Also, “hot pads.” These are areas for large parking lots, airport runways and other large outdoor spaces where snow is deposited for melting. It’s often cost-prohibitive to install piping to melt an entire airport runway or parking lot. So, to accomplish this, a concentrated amount of piping is installed in an area where snow removal crews can blade the lot, dumping snow on the pad. The pad melts the snow in areas where snow disposal would otherwise be a problem.

We also know of a snow-melt system installed in Texas of all places — on an interstate bridge — that’s heated by ground-source heat pumps. Pool decks and swimming pools, too. At some of these facilities, the energy used for snow melting is free of charge: institutional steam plants provide stray heat, or heat can be taken from a condensate return.

Dog kennels and animal containment are other applications where snow-melt heating excels. Zoos love the technology for its ability to bring animals out into areas where heat-seeking critters are seen and admired.

Here in Canada, one expert who many in the radiant heat and snow-melt trade have come to know is Don Gibbs – a partner, then sole owner, of tekmar Control Systems. For 30-plus years, Gibbs influenced and mentored hundreds, maybe thousands of hydronic professionals in North America. He shows no sign of slowing down, even though he sold tekmar to Watts Water Technologies a few years ago.

A recent project was Gibbs’ own home, constructed in the Vernon, British Columbia, Canada, area. As a civil engineer by training, Gibbs took special interest in designing the 3,000-square-foot, three-zone snow-melt system under the driveway. It performed its first duty, flawlessly, last winter.

The priority zone, controlled automatically to sense temperature and precipitation, is in front of the garage area.

“The snow-melted driveway surface is stamped concrete, which would easily be damaged by snow removal blades or other equipment,” Gibbs says. “So, naturally, warming the slab was the best way to get rid of ice and snow.”

Gibbs explains that, under the on-grade, 5-inch concrete slab is a thick layer of compacted gravel. Elevated rebar strengthens the slab and also serves as the support for thousands of feet of 5/8-inch Watts Radiant tubing, located about two inches below the upper surface of the driveway.

“I chose not to insulate the slab because the earth’s warmth is often just enough to keep the driveway free of frost that can form when there’s no real precipitation,” he concludes.

Watts Radiant tubing and other Watts system components make up the mechanical system controlled, of course, by tekmar controls. 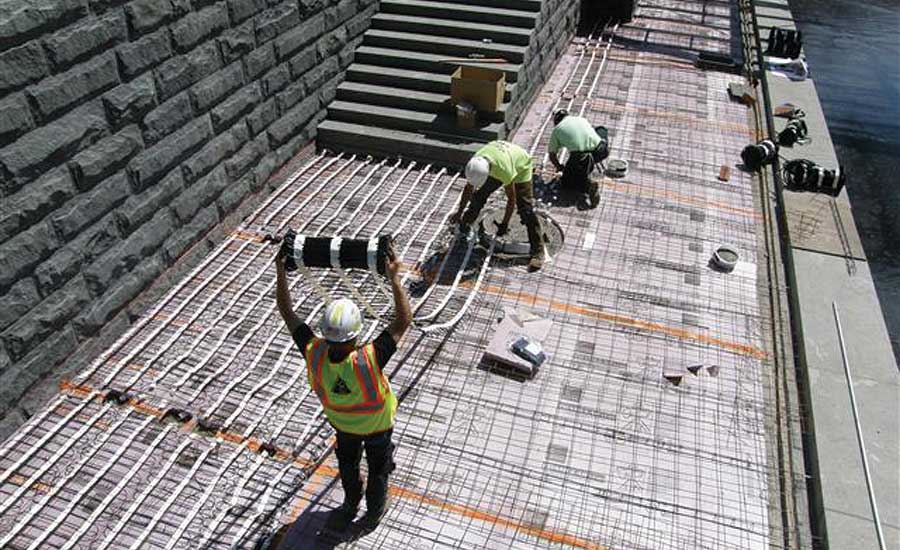 For much of the 19th century, Buffalo, N.Y.’s Inner Harbor was one of the world’s most profitable business centers, though it declined in use with the rise of railways and other forms of transportation. Then, in 1999, the Erie Canal Harbor Redevelopment Project outlined plans to reclaim the area for restoration. Sixteen years and more than $300 million later, the restored area encompasses Canalside, a mixed-use district that reconnects downtown Buffalo to the harbor.

The project was put to the test in the winter of 2014-2015, when a series of lake-effect events and clipper-type systems dumped 112 inches of snow on Buffalo. In order to keep Canalside and its ice rink open and accessible during the winter, project engineers knew they had to find a way to keep the pathways clear.

Because the Canalside project marked O’Connell Electric’s first experience with the snow-melt system, the company hired Russ Hacker, owner of Comfort Radiant, as a consultant who could walk them through the installation process.

“We knew the first day we met Russ that this was the right product and he was the right person to help us install it properly,” says Joe Pellerite, vice president of operations at the electrical contracting firm. “He met with everyone involved in the project — the general contractor, masons and our electricians — to instill in them the importance of following the proper procedures during installation.”

The GX system is embedded during paving. Just before concrete is poured, electricians attach the mats to the reinforcement mesh that ends up in the middle of the pour. Sensors, too, are embedded in the poured concrete.

The temperature setting for the Buffalo snow-melt system is 30° F so that any time the temperature of the concrete dips below 30° and there is moisture on the slab, the digital sensors signal the controllers, which are located in the basement of a building adjacent to the canals. The controllers act on this information, delivering 50 W of electricity per square foot to melt snow as it falls on the sidewalk.

“With this system in place, snow never has the opportunity to accumulate,” Hacker says.

Rich McNally is eastern regional sales manager for Watts Water Technologies. He can be reached at richard.mcnally@wattswater.com.