An installer is asked to provide a system that supplies two zones of fin-tube baseboard and two zones of floor heating. The system also supplies domestic water heating. He selects a mod/con boiler because it’s lighter than a conventional boiler, and pipes it as shown in Figure 1. The primary circulator runs when any of the space heating zones call for heat. Can you spot at least 4 errors in how this system is configured? 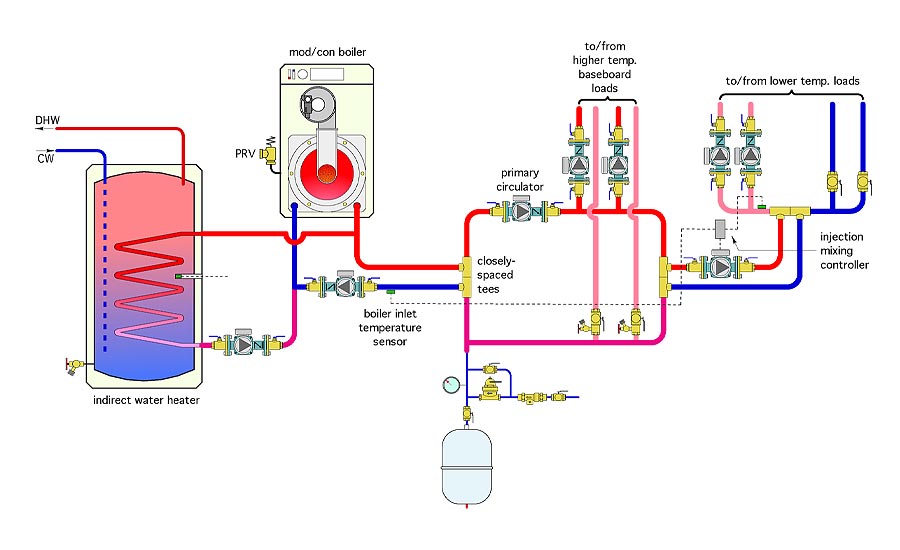 Although a mod/con boiler can be used in this type of system, it will operate at elevated temperatures depending on the requirements of the higher temperature baseboard loads.  Under partial load conditions, the boiler’s inlet water temperature may be low enough to allow some condensing mode operation. Most mod/con boilers have built in controls for outdoor reset, and this should be used to supply all space heating loads. The injection mixing controller for the low temperature loads should also operate based on outdoor reset. This will keep the inlet temperature to the boiler as low as possible and thus encourage the highest possible boiler efficiency. Domestic water heat is treated as a prioritized load.

Although the installer’s intention was to create a “primary loop,” that’s not what was created. The high temperature (baseboard) loads are shown piped as they would be with supply and return headers. When the “primary circulator” operates, it will create a pressure drop between the supply and return connections of the higher temperature load circuits. This will cause hot water to migrate into these higher temperature zones, regardless of any demand for heat. 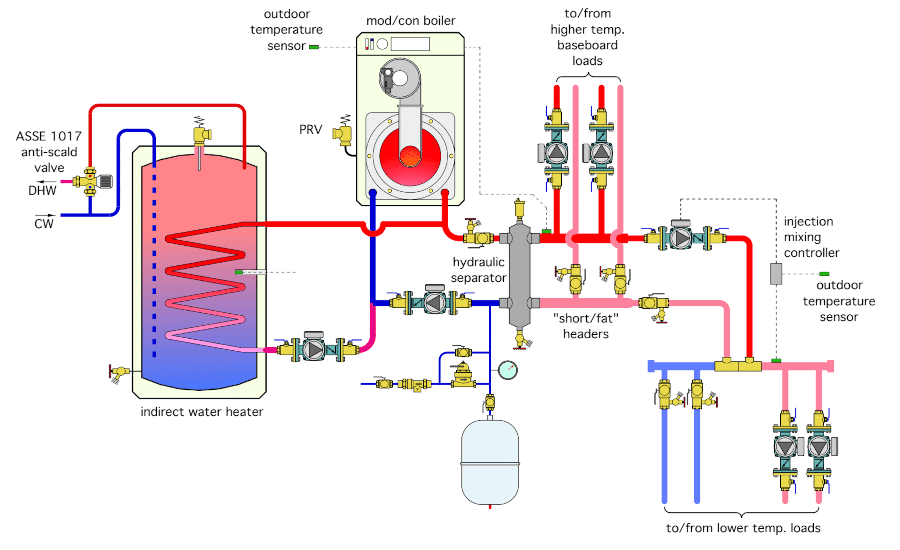 Another problem is the lack of a thermal trap, or check valve in the injection circulator to prevent heat migration through the injection risers and into the lower temperature zones when the injection pump is off, but the “primary circulator” is operating.

There should also be purging valves on the return side of all zone circuits, and these valve need to be installed in the correct orientation. They have been added and properly oriented in Figure 2.

There is no need for the injection mixing controller to sense boiler return temperature with a condensing capable boiler. The lower the return water temperature, the more efficient the boiler.

Finally, there should be an ASSE 1017 anti-scald mixing valve on the outlet of the domestic water heater.