Digital mixing supports consistent delivery of hot water on-demand wherever and whenever needed.

Many older commercial facilities today, especially larger, multi-story facilities with plumbing and mechanical systems that may date back 10 or 20 years, have domestic water systems with a consistency problem.

At hotels, the challenge tends to magnify by the number of guest rooms. That can be a substantial challenge for facility managers and maintenance staff because the range of problems with older domestic water systems often persist through all but one true solution: Digital mixing.

Older domestic water systems were good; just not good enough. As those systems have aged, the “perfect storm” for facility managers and system engineers forms as users become less tolerant of long waits for hot water, inexact temperature deliveries (where, especially, scalding can become a risk), or where there’s greater awareness of the risks of legionella bacteria in systems with fewer protective measures in place.

It’s all too common for managers of hospitals, upscale hotels or luxury condos with four- and five-star ratings to admit they can’t assure customers they’ll have a warm shower when they want it. Or, have consistent temperature deliveries throughout the day.

The director of engineering at a Marriott hotel near Kansas City, lamented the presence of stressful challenges with their domestic water pressure and temperature.

According to the engineer there, late arrivers and early risers often pushed the limits of a hotel’s water heaters and plumbing systems. At this 380-some-room hotel near a busy airport, there’s a steady flow of guests at all hours.

“The highest demand for hot water comes between five and 6 a.m. and again between 10 p.m. and midnight,” he says. It wasn’t uncommon for hotel managers to get several calls a week from guests, displeased about the lack of hot water.

“Unfortunately,” he adds, “The best we could tell them at the time was that hot water ‘was on its way.’”

For more than two years, the hotel battled domestic hot water issues. As it turns out, a large hydronic valve was used for the original system. The misapplied valve had a 120-second response time and couldn’t actuate quickly to keep up with the changing water pressures present within the hotel.
Because of the valve’s sluggish response time, every time something would go wrong with the pumps, heat exchangers or storage tanks, the entire domestic hot water system would require a time-consuming recalibration. Maintenance was required routinely — a constant source of disruption for the engineering staff.

“More or less, when maintaining the domestic water system, we had to isolate the entire piped network, shutting it down completely,” he continues. “Whenever the hot water mixing valve opened or modulated, the entire system would flood with cold water.”

Two years ago, facility managers and engineers decided to replace the entire hot water system. The engineering professional called on a local plumbing and mechanical installation firm specializing in commercial and industrial work.

“The owner of the company and I had this discussion about the hotel’s domestic water system,” the facility engineer says. “A key challenge was the presence of so many dynamic changes with the pumps and water pressures. We knew what the hotel needed was a smarter, more responsive valve — especially considering that the guests in all of the hundreds of rooms had very different schedules.”

Months earlier, the owner of the mechanical contracting firm had learned about a digital mixing valve made by Powers, a Watts brand.

“They make a smart delivery solution for mixing domestic water in a hot water recirculation loop,” the company owner explains. “It’s called IntelliStation. Shortly after learning about them from our rep, we installed one at a large hotel on the other side of town. There, we exceeded the expectations of facility managers — a strong confirmation that the technology worked well.”

Yet, to be sure, the contracting firm’s owner asked the hotel’s facility managers to visit another hotel that had similar hot water issues. There, they’d installed an IntelliStation digital mixing system, allowing the Marriott facility engineer to see it in operation and speak to facility managers who eagerly vouched for the system.

What he learned was that the hotel, which had experienced similar hot water issues, now had a fast-responding, safe and clean domestic hot water system that delivered hot water on demand.

“After hearing maintenance managers validate the technology — testifying that it only took seconds for hot water to get to taps — I was sold,” the Marriott facility’s manager says.

Digital water mixing represents a significant leap in the technology used to control hot water delivery. The approach incorporates a programmable valve to quickly process temperature (mixed outlet +/-2° F to set point), flow and pressure data, which is obtained from the hot and cold water inlets, mixed outlet and sensors on the mixed-water return. High-speed, responsive electronic actuation modulates a simple valve that allows the setpoint to be electronically controlled and maintained. An integral recirculation pump can be programmed to turn on/off to a target set point and temperature variance.

According to the Centers for Disease Control and Prevention, proper maintenance of water distribution systems is key to preventing illness from water-borne bacteria such as Legionella. CDC statistics show that 8,000 to 18,000 people are hospitalized with Legionnaires’ disease in the U.S. each year. Managers of commercial and institutional facilities know that selecting and controlling proper water temperature in their storage and delivery systems plays an important part in preventing germ growth. 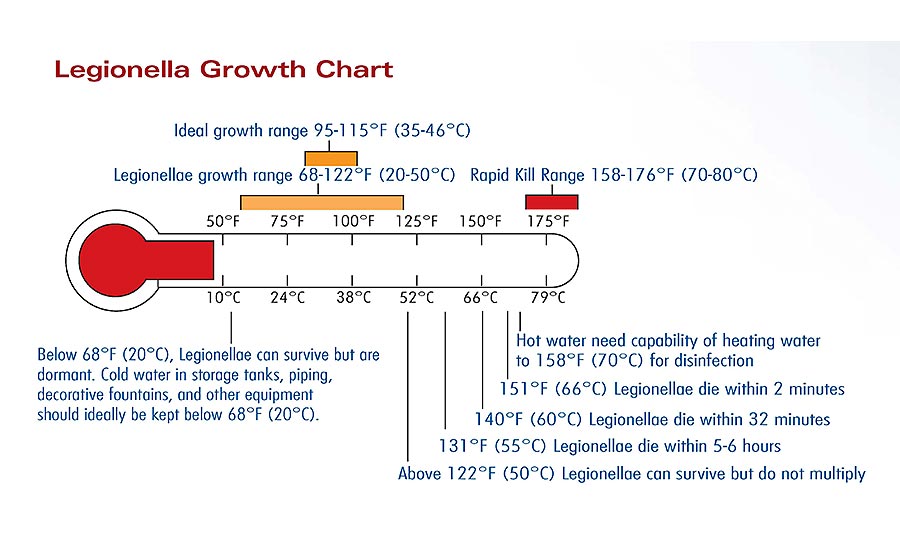 The thermal shock of a rapid and uncomfortable change in shower water temperature can cause a fall or serious injury. With digital mixing, stable mixed water is delivered to ASSE-listed thermostatic point-of-use devices (shower or sink valves) to minimize this risk.