Expansion tanks perform a simple but vital function in all closed-loop hydronic systems.

When water is heated, the space required for each molecule increases. Any attempt to prevent this expansion will be met by tremendous forces. If a strong metal container is completely filled with liquid water and sealed from the atmosphere, it will experience a rapid increase in pressure as the water is heated. If this pressure is allowed to build, that container will eventually burst.

To prevent such a result, closed-loop hydronic systems are equipped with an expansion tank. The tank provides a “cushion” of air — a highly compressible fluid — against which the expanding water can push without creating large pressure increases in the system. Think of the air in the tank as a spring. As the system’s water expands, this “spring” gets compressed. When the water cools and contracts, the “spring” returns to its original condition.

Today, the most commonly specified expansion tank for residential and light commercial systems uses a highly flexible butyl rubber or EPDM diaphragm to completely separate the air and water inside the tank. This diaphragm conforms to the internal steel surface of the tank when the air side is pressurized, as shown in Figure 1. 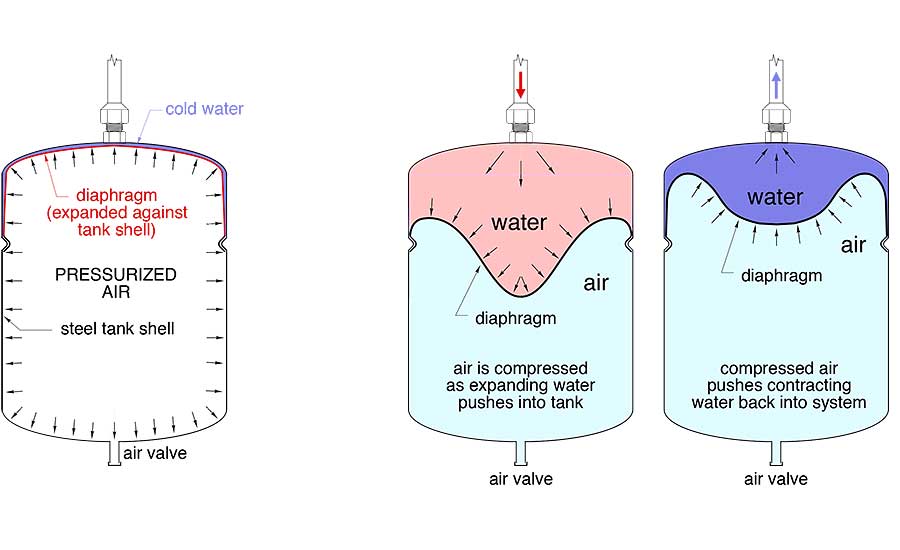 Diaphragm expansion tanks can be sized using charts or software. A detailed procedure for sizing diaphragm-type expansion tanks is given in several industry publications. The key concepts are:

Even when an expansion tank is properly sized, installation details can make or break its ability to function as intended and provide many years of service. Here’s a listing of proper expansion tank “etiquette” that will keep those tanks functioning as intended.

1. Pump away. A detail that was once understood and respected in the hydronics industry, but slowly faded in priority against other packaging or installation “conveniences,” is to connect the expansion tank into a hydronic piping circuit near the inlet of the circulator. Doing so minimizes the pressure drop between the point where the tank connects to the circuit, (e.g., the point where there is no change in pressure when the circulator turns on), and the circulator’s inlet. This allows the differential pressure created by the circulator to be added to the static pressure in the system. Increased system pressure helps protect the circulator from cavitation and often allows for quieter operation. It also enhances the ability of air vents to eject air from the system. Figure 2 shows several acceptable placements of the tank. 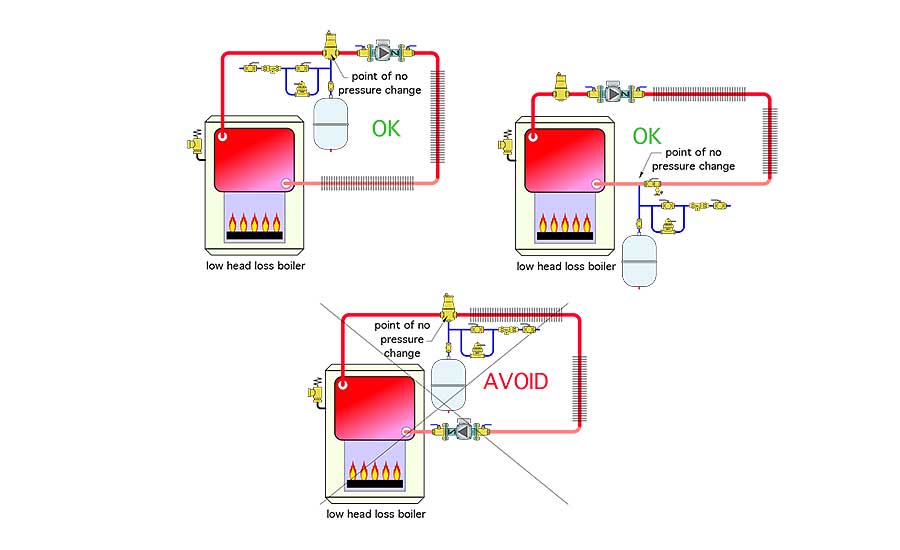 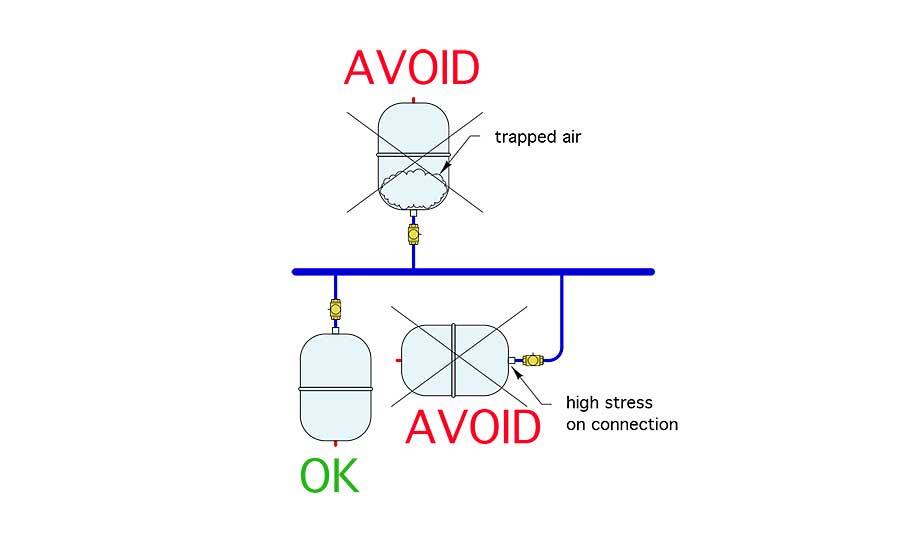 3. Check the air side pressure. It’s important to verify that the air side pressure in the tank equals the static pressure that will be present at the tank’s connection when the system is filled with cold fluid. Most manufacturers state that their tanks are pre-charged to 12 psi. Don’t assume this is always true or correct. 12 psi is appropriate for systems where the top of the piping is about 16 feet above the inlet of the expansion tank (assuming that 5 psi static pressure is desired at the very top of the system to allow air vents to function properly). Taller piping systems require higher air pressures to prevent partial compression of the diaphragm before the fluid is heated. Calculate the static pressure at the tank inlet using Formula 1.

For example: If the top of the piping circuit was 25 feet above the expansion tank connection, and assuming the system is filled with water, the correct air side pressure in the tank would be:

Get a low-pressure tire gauge with a scale of 0-30 psi and a bicycle pump or small air compressor. Use them to set the calculated air side pressure before filling the system with fluid.

4. Plan for isolation. The life of an expansion tank depends on system operating temperature, pressure, fluid chemistry and oxygen content. Some tanks fail when a leak develops in the diaphragm.This usually causes the tank to fill with fluid and become “water logged.” You can check for this by pressing in the stem of the Schrader valve. If a stream of liquid comes out, the tank is toast. Tanks can also develop leaks in their thin steel shell. The only option is a new tank. That’s when you will appreciate having a ball valve that can isolate the tank from the remainder of the system. Without this valve, you might have to drain several gallons of fluid from the system just to unscrew the failed tank and screw in a new one.

6. Plan for lowest fluid temperatures. In most hydronic heating systems, expansion tank size and air side pressurization is based on the assumption that the cold fluid used to fill the system is in the temperature range of 45° to 60° F. That’s fine for most hydronic heating systems. However, when an expansion tank is used in a solar collector circuit, or a snow melting system, the antifreeze solution will, at times, be much colder, perhaps even below 0°. If the tank’s diaphragm is fully expanded against the steel shell at a fluid temperature of perhaps 45°, any further cooling of the fluid could cause negative pressure in the system, and possible inflow of air from a float-type vent. The concept is to add sufficient fluid to the tank during loop pressurization so the diaphragm is not completely expanded against the inside of the tank until all fluid in the system is at the lowest possible temperature.

7. Adjust for antifreeze. Solutions of propylene or ethylene glycol have higher coefficients of expansion compared to water. The higher the concentration of antifreeze, the greater the expansion volume required. The increase in volume for water heated from 60° to 180° is about 3%. The increase in volume for a 50% solution of propylene glycol heated from 60° to 180° is about 4.5%. This should be accounted for when sizing tanks for systems such as snow melting, solar thermal or other applications where glycol-based antifreeze solutions are used.

1. Don’t combine steel and oxygen. Don’t use a standard expansion tank with a carbon steel shell in any type of open loop application, such as a system that uses potable water to carry heat to hydronic heat emitters (which is a bad idea for a number of other reasons). The higher dissolved oxygen content of the water in an open loop system, relative to that in a closed-loop system, will accelerate corrosion of the thin carbon steel shell of the tank. This limitation also applies to closed-loop systems using non-barrier PEX tubing or other materials that may allow oxygen diffusion in the system. Expansion tanks with internal polymer linings should be used in any application where higher levels of dissolved oxygen could be present.

2. Don’t fill it with dirt. Don’t install expansion tanks directly below hydraulic separators. Doing so allows dirt collected at the bottom of the separator to drop into the expansion tank. Over time, this could lead to failure of the diaphragm. If the tank needs to be near a hydraulic separator, it’s best to mount it from a tee in either pipe connecting to the lower sidewall connections on the separator, as shown in Figure 4. 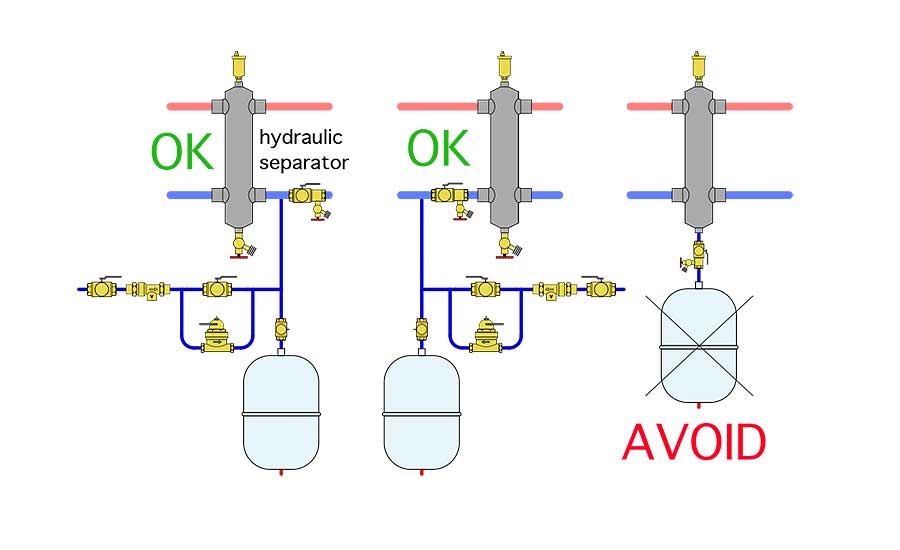 3. Don’t overheat it. Whenever possible, avoid locating expansion tanks in close proximity to very hot water. When the tank’s shell is heated by heat migration (conduction and convection), the pressure of the air in the tank increases. All other factors being equal, this increases system pressure relative to a situation where the tank shell is cooler. It may lead to leakage of the pressure relief valve. It’s fine to locate the tank several feet away from where the tube from the tank connects to the system. Keep the tank lower than this connection point to reduce heat migration by convection.

4. Don’t create multiple connection points. It’s fine to use two or more expansion tanks that together have the same volume as a single larger tank. However, those tanks should connect to a common pipe, which has a single connection point in the system. Avoid connecting multiple tanks to different parts of the same piping. This can cause unexpected pressure variations depending on where the circulator(s) and piping components are located relative to the tanks.

5. Don’t leave it vulnerable. Small expansion tanks that hang from ½-inch top connections can be easily bent by accidental impact, such as someone standing up from a bent-over position and bumping the tank. Ask me how I know this… If the tank must be mounted in a vulnerable location, use a restraining system to secure the shell to a solid surface, as shown in Figure 5. Some expansion tank manufacturers offer strapping kits or other hardware to properly support the tank shell. 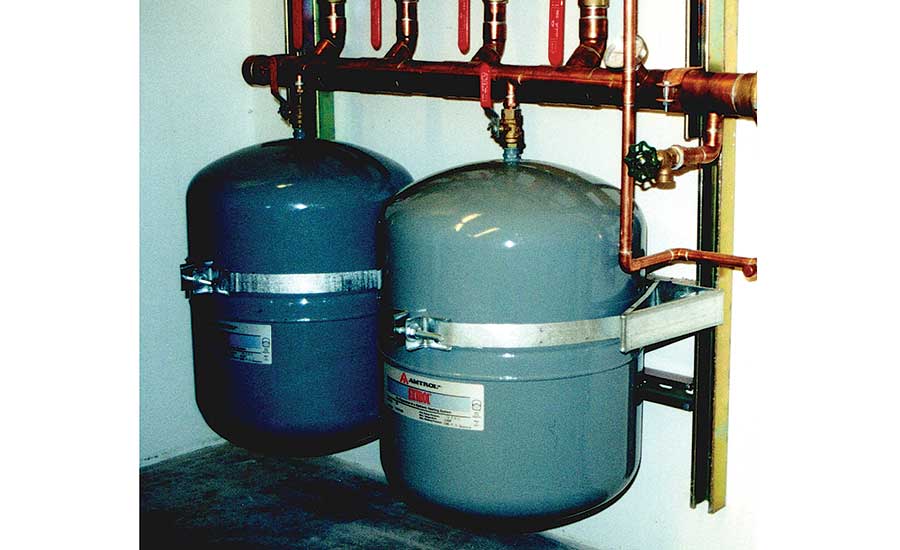 In addition to the strapping, notice that both tanks have isolating balls and sufficient room for accessing the Schrader air valve at bottom. Both tanks are connected in parallel to a common pipe, allowing for a single connection point to the circuit.

6. Don’t assume compatibility. Be sure the expansion tank you select is compatible with the fluid used in the system. Combined butyl/EPDM or all-EPDM diaphragms, are generally compatible with glycol solutions and the methanol or ethanol solutions sometimes used in geothermal ground loops. However, different tank suppliers use different materials for diaphragms and there are different temperature limits on those materials. It’s always best to verify compatibility between the fluid in the system and the intended expansion tank model.

Expansion tanks perform a simple but vital function in all closed loop hydronic systems. Employing proper etiquette, in addition to proper sizing, will keep them functioning as intended.

John Siegenthaler: Btus in a box