Backflow testing does not require a plumbing license in California, but some contractors say it should.

Only licensed plumbers in California can install, maintain and repair the state's many backflow prevention devices. But the Contractors State License Board does not require licensing in for non-plumbers who test these systems.

"In Los Angeles County we require all the backflow testers to be certified," explained Lloyd Huff, chief environmental health specialist with the Los Angeles County Department of Environmental Health, who is also program director of the department's cross connection and water pollution control program. "They have to come in and take a hands-on examination; if they pass it they're certified. We don't require all testers to be licensed plumbers, but we do require that they're working for one. They either have to have a C-36 state contractor's license, or they have to be working for someone [who does backflow work]. The company is responsible. If it's an individual tester, they are the one that's responsible, as far as liability. If the tester is certified, that's okay with us." 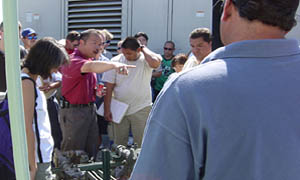 Outside of L.A.County it is difficult to enforce these C-36 requirements. Backflow testers who aren't licensed plumbers and who do not work for a licensed plumber have been known to take testing jobs by undercutting the price that plumbers charge for the service. Some contractors feel that a four-year apprentice program is necessary to insure that the backflow tester has a grasp of the entire plumbing system and how it operates.

"You have people who have gone through a 20- or 30-hour class, and they're out there testing backflow devices," said one southern California plumbing contractor on condition of anonymity - we'll call him Smith for purposes of this article. "They have no knowledge of hydraulics, plumbing systems, drainage, etc. It takes a lot more than one class to be qualified to troubleshoot and test properly. A plumber can fix any problems right there, as opposed to some guy that has only a few hours of training. It's like anything else: you've got to do it for awhile and you have to have some knowledge of plumbing systems."

Smith pointed out that it takes four years of study and on-the-job training to become a licensed plumber. "Why do plumbing apprentices go through a four-year training program?" he said. "If they could qualify a plumber in one year, they would do it. But for the last 30 years it's been a four-year apprenticeship program because that's what it takes. When I started, I spent six or eight months just watching a guy testing valves and repairing them. You learn by doing, but all you're learning in a single class is how to test a valve sitting on a bench. That's not the real world."

Huff cited the training necessary for the certification process. "You don't have to know everything about backflow to pass our certification exam, but you do have to know how to test," he said. "The PHCC has training classes for this and there are a number of schools such as USC, who offer a one-week training course."

Roger Lighthart, owner of The Lighthart Corporation, had positive things to say about the training programs available for backflow testing and the certification process itself. "In order to have backflow testers certified you have to go through a pretty strenuous hands-on demonstration that you know what you're doing," said Lighthart. "To get the certification you've got to demonstrate that you can detect what is wrong with several ‘jimmied' backflow systems. It's not easy. USC conducts an educational program that is usually a five-day, hands-on class, and they don't let you out of there unless you know what you're doing."

But Lighthart also pointed out the problems that can arise when unlicensed testers perform these jobs independently. "Some of these guys who only test end up saying ‘Oh, I can fix it for you.' Therein lies the problem. That's what screws up the trade."

Smith said backflow testing needs to be done only by licensed plumbers, who will have no problem getting certified. "In California, if you're not improving the property there is no license required," he said. "But because backflow prevention is a health and safety issue, there should be. Legitimate contractors such as landscapers and fire sprinkler installers feel that they should be able to test a backflow device. But plumbers know the whole system, the piping and the backflow, it's in our scope of work, the license board has already decided that."

The view that backflow testing should be done only by licensed plumbers tends to draw negative feedback from non-plumbing contractors, according to Lighthart. "Should backflow testing be done by someone in the plumbing trade? Absolutely. But then I'm accused of being an elitist who's trying to exclude people."

The Business and Professions Code Section 7026 defines the term "contractor," according to Mike Brown of the Contractors State License Board (CSLB). This section of the code determines whether or not a scope of work is subject to licensure by the CSLB.

"In general, the section references works of improvement to real property," said Brown. "That particular condition must be present to trigger the licensing requirement--unless there is an expressed provision otherwise. The legislature has provided four such ‘expressed provisions' within 7026: (1) erection of scaffolding, (2) cleaning of grounds/structures that is necessary directly due to the construction process, (3) traffic control in construction zones, (4) calibration of monitoring equipment for underground storage tanks. These last two have each been added to the realm of ‘licensing requirements' by legislation within the past five years. Similarly, in order for the testing of backflow devices to be subject to licensure, it will take legislation."

The importance of registering backflow systems with the local health department is often overlooked by property owners, but it is crucial to public health and safety. So the responsibility falls squarely on the plumber's shoulders.

"The plumber that installs the backflow device is responsible for letting us know it has been installed," said Huff. "A lot of times the [property] owners don't know anything about backflow, they don't even think about it. But we write compliance letters all the time to install backflow devices where they're needed. When they're installed we put them on test, whatever the use is, so that the potable water supply is protected."

Huff pointed out that a lot of installed backflow devices do not get tested at all. "We're not notified they were put in," he said. "We'll make inspections and [often] find a device that's been installed that we don't have on test. One of the biggest reasons we don't get notified is that not all plumbers are certified backflow testers--they just want to get the job done and get out of there. If an uncertified plumber installs a backflow device, they can have someone who is a certified tester do the testing."

The average of failure on backflow devices is about 15 percent each year, according to Huff, and it is usually a single component within the system that malfunctions. "We have 50,000 backflow devices on test in L.A. County," Huff said. "There are more backflow devices than that, but a lot of the others are what we call meter service protection, and those test notices are sent out by the water companies. If it's a reduced pressure principle device it will have two check valves and a differential relief valve, so all those would have to fail [for contamination to occur]. Even though a check valve leaks, which means the device fails, it may be a really slow leak that takes days for enough water to leak back through to cause contamination."

A typical backflow system can go for five to seven years without failing, Huff said, but the longer the system goes without being tested the higher the chances of a "really bad backflow incident" increase. "Most of the time a check valve will just leak slowly, and it gets fixed before it gets really bad," he said. "That's why it's really good to have them tested every year."